You are here: Home / Trailers / “Zombieland – Double Tap” trailers and does the family that slays together stay together? 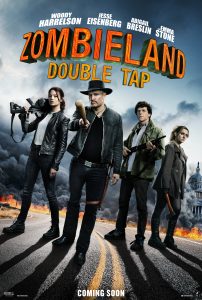 “Through comic mayhem that stretches from the White House and through the heartland, these four slayers must face off against the many new kinds of zombies that have evolved since the first movie, as well as some new human survivors. But most of all, they have to face the growing pains of their own snarky, makeshift family.”

Zombieland: Double Tap is out in the US on 11 October and the UK on 18 October. It co-stars Zoey Deutch, Thomas Middleditch, and Rosario Dawson. Like the original, this sequel is directed by Ruben Fleischer (Venom); with original writers Rhett Reese & Paul Wernick (Deadpool) also back.

If you’re off to see this sequel but haven’t seen the first film, or you’ve forgotten it, check out my 4-star spoiler-filled review here)