You are here: Home / Film Reviews / Victoria And Abdul 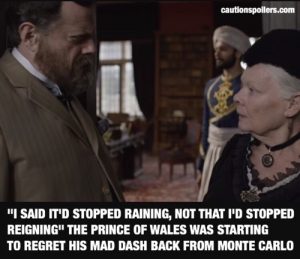 One of the downsides of being a rich, powerful monarch who is a figurehead for billions is a lack of privacy, and In Victoria And Abdul one of our most famous queens has to give regular updates to her physician, while surrounded by servants and courtiers, of her bowel movements. Sadly the film, like Victoria herself, could have done with more roughage.

This tale of a young Indian servant, Abdul Karim, who catches the eye of the old queen and ends up her favourite, means well, but isn’t enough of an irritant to the Establishment. While British racism is highlighted, and we are certainly encouraged to laugh knowingly at the English (when Abdul and his compatriot Mohammed arrive they are given clothing which isn’t actually authentic as “the Indian drawings didn’t look very Indian”) overall its approach is rather condescending.

The film is very funny in parts, and looks wonderful, but the key real-life figure of Abdul, who should be centre stage, is instead so lightly drawn that when Victoria isn’t around (spoiler: she died in 1901) the story becomes rather dull.

For the men who run the Royal Household, the two Indian men are simply objects to be moved around – tall, slender Abdul (Ali Fazal) is meant to travel to England with another man the same height as him to present a special coin, but due to an accident the other man doesn’t come – and short, squat Mohammed (Adeel Akhtar) comes instead, leading to the shocked comment from a courtier on arrival at Windsor Castle “but they’re completely different sizes!”

The castle etiquette, as odd to us as to Abdul and Mohammed, is well done and interesting: there’s a beautifully attired small boy who spends his day running up and down corridors delivering urgent messages to footmen; the equally urgent clearing of one’s aristocratic plate at a banquet as once the Queen is finished everything is wisked away; and best of all unpleasant courtiers forced to endure a wet and freezing picnic complete with dining chairs, tables and silver cutlery on top of a heathery Scottish moor because that’s what the queen wants (actually my children wouldn’t see this last one as odd at all).

Queen Victoria (Judi Dench) is by now overweight, ageing, and stroppy, and tends to fall asleep at dinner (which she eats very messily). Despite umpteen warnings not to look Her Majesty in the eye when delivering their coin, Abdul does just that, and she is instantly taken with the handsome young man. Instead of returning to India, he and Mohammed are instructed to stay, and soon he is a close confidante – regaling her with the love story behind the Taj Mahal, describing favourite Indian dishes, and teaching her Urdu.

The courtiers are horrified, and Victoria delights in antagonising them and her unpleasant eldest son Bertie. The Prince of Wales (Eddie Izzard, with an accent that changes quicker than the Balmoral weather), is by now portly, middle-aged and waiting for his mother to die. He’s also furious that Abdul has taken his mother’s affections. Meanwhile Mohammed sickens in his freezing castle room, wrapped in a blanket, desperate to go home.

The queen does speak out against the Royal Household’s racism. But while I may be doing her a disservice I’m not convinced she was such a staunch anti-racist as this film wants us to believe. As a product of her age and her class, despite her friendship with and respect for Abdul, I would be surprised if her views on equality went as far as understanding oppression on a wider scale. She was, after all, the figurehead for the greatest empire the world had ever seen. She also comes across as woefully uninformed about religious tensions, war and famine.

Mohammed is a caustic delight (doesn’t the sidekick always have the best lines?), ripping into the racist, uncivilised behaviour of the British aristocracy in almost every conversation, though that does seem to be the main point of him. A more interesting film would have been told from his point of view, especially as Abdul finds it easy to leave Mohammed, who is still a servant, behind (in one scene, sitting in Abdul’s luxurious train carriage as they head to Florence, Abdul lies across a double bed that almost fills the space, with Mohammed given a mat on the floor).

What is interesting is seeing an older woman/younger man power dynamic, something that often only happens when the woman has been raised up way above the norm, and the man pushed down. Victoria does seem to be attracted to him, they genuinely like each other, and she defers to him as her teacher. But she still holds all the power, which means he gives her what she wants, including a highly sanitised version of historical events. Victoria makes the point that both she and Abdul are servants, though their positions are wildly incomparable.

Unsurprisingly her courtiers eventually try that age-old tactic to shut down a woman seen as too big for her boots – they threaten to have her put away for insanity.

Judi Dench plays Victoria with unsurprisingly brilliant imperiousness. She almost seems to get younger as the queen ages, as if Abdul’s friendship is bringing back her girlish charm and diminishing her sheer exhaustion with those endless royal engagements. Her speeches to errant courtiers hold the room, even if they don’t seem quite believable. Unfortunately Ali Fazal as Abdul is more smiles and royal foot kissing, and by the end I still didn’t feel I knew much about him. By contrast Adeel Akhtar who plays Mohammed (and was Kumail’s hilarious brother in The Big Sick) is wittily, angrily believable.

The costumes are gorgeous, with Abdul and Mohammed resplendent in cream and brightly coloured (if inauthentic) silks. And I do love the rustle of black duchesse satin over a bustle. The enormous banqueting tables, resplendent with crystal and fine china, certainly made me feel bad for moaning about unloading the dishwasher.

The major and minor barbarisms of the British are constantly highlighted in both the vicious racism of the courtiers, and laughing at impolite upper class British mores – it’s certainly true that the posher you are the ruder you can be, and good manners were for a long time considered a peculiarly middle class affectation.

But the overall affect of Victoria And Abdul is of making good-mannered white middle class British people feel better about ourselves and about Victoria.

Buy Victoria & Abdul on DVD and blu-ray from Amazon.com