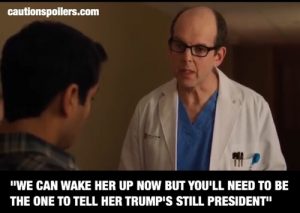 Kumail is an Uber driver moonlighting as a standup comedian, or maybe it’s the other way around. His flatmate is also a comedian but a really terrible one, which probably works well for Kumail, a bit like having a less attractive friend to make you look even prettier.

Having grown up in Pakistan, Kumail (Kumail Nanjiani) is now living in Chicago, as is his Muslim family – near enough for free meals but enough distance between them so they don’t know he never prays.

But thank goodness he does go home, as the conversations around his parents’ dinner table are utterly fabulous. Living in the US, but desperately hanging on to their roots, his mum Sharmeen and dad Azmat (glorious performances from Zenobia Shroff and Anupam Kher) pick and choose the aspects of American life they like while resolutely insisting on arranging marriages – even if informally – for their two boys, Kumail and Naveed.

And they are hilariously brutal – talking about a relative they’ve pushed from the family for marrying a non-Muslim white woman, Kumail’s father openly admits he hacked into the cousin’s social media accounts, to discover they have a baby called Dah-veh – or as Kumail points out, Dave. Almost every mealtime there’s a ring on the doorbell and another beautiful and accomplished young Pakistani-American woman appears, sometimes with parents in tow, dropping in as they were “just passing” – as Kumail’s mother pretends to be surprised.

Kumail doesn’t want a relationship with any woman, as he’s dedicated to making it as a stand-up comedian. Though he and his fellow stand ups are funnier offstage than on – their chatter before and after shows is perfectly timed and perfectly pitched.

Then one night after a show Kumail meets Emily (Zoe Kazan). She’s a trainee therapist – and their beautifully if at times awkwardly unfolding relationship comes to an abrupt halt after five months, when Kumail tells her bluntly that he can’t and won’t introduce her to his parents.

Kumail’s brother Naveed (Adeel Akhtar) is also trying to find his own way to bridge the gap between cultures, including the age-old cookie/biscuit dilemma. He has had an arranged marriage, to Fatima, and his comments about them growing to love each other within their relationship are very touching. He is also brutal in his summing up of what their mum will do if she finds out about Emily: “you have to end it now or Mum will fucking ghost you”.

Initially, Emily and Kumail’s developing relationship is sweetly told. Neither wants a partner. She doesn’t particularly like his favourite films, yet in time-honoured fashion he still insists on making her watch them while studying her intently for the correct responses. At one point she is desperate for the loo in the middle of the night but can’t go in his apartment as there is no air freshener in there, so makes up a bizarre story why she has to go to the diner nearby at 3am. (There’s been a lot of thwarted pooing in films lately. We still don’t know if Tommy managed his pre-evacuation evacuation in Dunkirk.)

For the first half of the movie, Kumail is the least engaging character. Maybe because he’s always known that a non-Muslim, white girlfriend will only ever be a girlfriend, and a temporary one at that, as he’s completely matter of fact and rather cold when he’s explaining the reality of this to an emotional Emily.

The brilliant banter around him doesn’t help either, it just makes him – with his dryly sardonic quips – seem even more of an aloof island in this sea of warmheartedness. And although it’s part self-protection, Kumail is so wrapped up in himself it doesn’t seem to occur to him that he is also wasting the time of the women his mother invites to drop by, rather than the other way around, or that they might feel the same cultural conflicts he does.

After their break-up Emily falls ill, and Kumail’s hospital vigil begins. He also finally meets her parents Beth and Terry, but unlike Kumail it turns out Emily tells hers everything and they are in no mood to have the ex-boyfriend who broke their daughter’s heart hanging around while they wait to hear if she will live or die.

Beth, extraordinarily well-played with jittery yet focussed motherliness by Holly Hunter, and Terry (a brilliantly deadpan Ray Romano), who is (almost) always happy to be the butt of everyone’s jokes, gradually thaw towards Kumail. Initially not because they like him but because sometimes you need someone to tell your most painful thoughts to, and he’s there and soon probably won’t be. And sometimes you want to take your mind off infections and viruses. Hence Kumail’s introduction to Terry’s self-explanatory game “You Can’t Rhyme It” (and though Kumail instantly wins with Stonehenge, Terry, I give you “orange”, and “Keanu”.)

At the hospital the medical advice comes thick and fast but it is confusing rather than clarifying. Too many doctors using too many words that aren’t spelled phonetically makes the parents’ pain turn into bemusement. Everyone means well but only Beth and Terry are really centering Emily.

Emily is essentially comatose for a large chunk of the movie – while Kumail is growing as a person, she’s effectively in suspended animation. When she does wake up a combination of drugs and sustained rage at his previous behaviour means she is in no mood to hear how much he’s learned about himself from her near-death experience.

The script (based on the real life relationship between Kumail Nanjiani and Emily V Gordon, who jointly wrote it) is mostly extraordinarily good. The chatter seems so genuine, and the timing is always pitch perfect.

At two hours, The Big Sick does drag slightly during the hospital scenes, and the tone is a bit uneven. It’s funniest in the first section but this isn’t completely sustained, and while I realise not everyone finds the potential death of a loved one rip-roaringly hilarious, Kumail has already proved he can tell the bleakest of jokes with his 9/11 gag (which will probably turn out to be the biggest “wish I’d thought of that” event in the history of comedy).

The performances are constantly spot on, but there’s a welcome sense of realism, particularly about families and their imperfections. Everything isn’t neatly sorted out by the end, because even the strongest of families is a constant work in progress.

I am though going to wade in to the biggest controversy of the film, and point out that actually, Naveed was right – it’s not a cookie, Kumail, it’s a biscuit.

buy / rent The Big Sick on amazon video or buy on dvd or blu-ray from amazon.com