You are here: Home / Film Reviews / The Meg 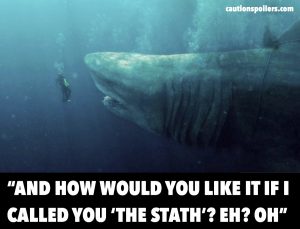 Even as a B-movie The Meg could have been scarier, funnier and sillier. But bitching about it would be like kicking a particularly boisterous, fluffy kitten.

It’s quite enjoyable if not particularly memorable. There are a couple of terrific action set pieces, particularly Jonas being pulled through the sea at top speed with the Meg in hot pursuit.

And the Meg itself is so huge that every time its fin appears atop that enormous grey body it’s impossible not to be awed, as it surfaces and dives like a nuclear submarine. (Don’t worry, I don’t think this is another Cold War allegory. It really is just Jason Statham trying to kill a humungous shark while making bad jokes.)

Jonas Taylor (Statham) is a top diver who five years previously saved 11 men from unimaginable depths but had to leave his two best friends to die.

He’s sure there was an enormous creature there with them, so powerful it bashed in a nuclear submarine. But no one believes him, and it’s suggested he was suffering some sort of psychosis. Vowing never to dive again, he’s moved to Thailand and spends his days drinking beer and making bad jokes. Though it doesn’t seem to have done him much harm as he’s still declared to be in tip-top shape when he’s called in to attempt another rescue.

This time it’s a crew of three stuck at the bottom of the Mariana Trench after an attack by a huge unidentified creature. One of the stranded is his ex-wife Lori – who he likes enough to rescue against the odds, but luckily not enough to interfere with a slow-burn romance that develops between him and marine biologist Suyin (Bingbing Li), on board research facility Mana One.

The research programme is run by Suyin’s father, Dr Zhang (Winston Chao), but financed by Jack Morris (Rainn Wilson), who’s arrived to watch the first descent to the very bottom of the trench – the new bottom, as what was thought to be the base has turned out to be a freezing gas layer.

Beneath that freezing layer is a new world of extraordinary beauty and never before seen species of fish, squid, and aquatic plant life. But what else has it been hiding?

You can understand the megalodon’s fury, before we even get to the shortening of her name without permission. This is a home invasion, and it turns out she’s one of those homeowners who doesn’t just fight back but chases you down the street too.

Unfortunately for Jonas and the crew, Meg makes it to the surface. And it turns out this megalodon is not a lonely, millennia-old spinster after all. There’s another, also called Meg, like the novelist Evelyn Waugh who was married to a woman called Evelyn Waugh.

There’s also a beach resort nearby too, filled with attractive young people whose legs kick appetisingly under the water.

Killing a Meg involves chasing it round with trackers and syringes and then repeating it all later, a bit like me trying to give my 6 year old antibiotics.

The action, when it occurs, is frenetic and impressive, though it’s a while before we properly see a shark. When it does appear it’s so huge you can, for once, understand everyone stopping to stare open-mouthed, rather than run / swim / sail away really fast.

Between attacks there’s some half-hearted philosophising about science versus survival, best summed up by crew member The Wall’s comment “that living fossil ate my friend”. And an attack by the Meg on shark-killing fishermen positions her as an avenging ally. Jonas isn’t Ian Malcolm, and never really comes out with anything of the calibre of “life will find a way” – though let’s face it, that’s not why we’re here.

There are some satisfyingly inverted tropes: the mother whale and its baby which will leave you blubbering when they don’t get to swim back safe and well at the end; and there’s a “plastic shark cage” which is deemed unbreakable. In most blockbusters this would mean it shattering after some bizarre set of unthinkable circumstances but here they are stuck in the middle of a bizarre set of unthinkable circumstances and it doesn’t even crack, not ideal when a giant shark is trying to swallow it whole with someone inside it.

And Jonas? Well Morris puts it best summing him up as “he looks heroic and he walks fast but he’s kind of got a negative attitude”. Though that attitude is soon changing to one of “now you believe me!”, each attack further proof that Jonas was right all along.

The Meg is a USA/China production and I liked that Suyin and her dad spoke to each other in their own language (with subtitles) during emotional or stressful moments.

Overall the movie is derivative and sometimes dull, and while its humour at its best is deliciously bleak, it’s not as funny as it could be. But nearly all the characters seem quite nice and hard-working and friendly – that shark is a big enough and relentless enough opponent not to need them to fight on another front for our benefit.

Most of the crew don’t get a chance to shine, though the actors offer good support. Ruby Rose is considerably better as crew member Jaxx than she was in John Wick 2 – tough and a team player. Cliff Curtis as Mac is witty but committed.

Wilson’s Morris is refreshingly human, for a rich guy. He’s a bumptious billionaire with a streak of brilliance, rather than a purely hateful capitalist. He does stupid things but his often-mocked suggestions tend to contain an obvious grain of truth. And he must be quite able as he’s made billions, unless he inherited trillions and then went into book publishing.

Bingbing Li’s Suyin is a welcome delight – brave, clever and dryly ego-puncturing. And The Stath? His accent starts off sort of Australian before reverting to his gruff cockney. His character is stern and stoic, having made his peace with potentially being eaten. And he makes bad jokes. It’s an entertaining performance that’s initially rather daft but then, if you give in and sink into it, somehow works.

And I must mention Pippin, the cute terrier bridesmaid with the pink bow who is thrown from a wedding reception boat and into the path of the Meg. She’s delightful, and deserves her own franchise (and I’m sorry Daisy, but she has a bit more gumption than you).

But who wins, the Meg or the Stath? Well what can I say, this is one in the eye for prehistoric sharks.