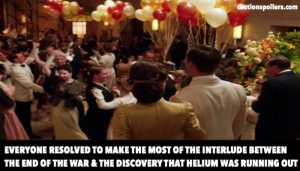 There’s a cosiness to the word-count guzzling Guernsey Literary And Potato Peel Pie Society, in a lie-back-and-think-of-postwar-England kind of way.

But it also has a grittiness woven through the Society’s very existence; a story of romance, betrayal and sacrifice, though not everyone on the island views it in the same way.

Wartime romances between couples on opposing sides are always fraught; when does genuine romance turn into collaboration? Is it worse if your German beau gives you lipsticks and stockings? Such couplings are rarely left behind; the effects ricochet down the years.

This was mostly filmed in mainland Devon, but the Channel Islands are referenced everywhere, including the huge diamond engagement ring that writer Juliet Ashton is given by her rich American boyfriend Mark, a sparkler which could give Sark a run for its money in the enormous rock stakes.

A young and successful author, Juliet is constantly hurried from one bookshop reading to another by her wryly funny and very protective publisher Sidney (Matthew Goode). Juliet isn’t so much a free spirit as a lost soul, a woman without an anchor; Sidney is a guiding and protective arm throughout love and literary ups and downs.

Post-war London looks great fun if you have a rich boyfriend (Mark outspends Elton John on flowers), but for other people, a return to normality is slow. Watching from a bus, Juliet is stunned to see a freshly-painted front door; on Guernsey, her landlady requests her milk ration stamps.

As a writer Juliet struggles to find her own voice; her previous successful books have been written from a man’s point of view. She’s diffident and puts herself down, and it takes Sidney to force her to put herself forward, and first. (Though only so far as convenient. When she disappears off to Guernsey to track down the tantalising book club, the men in her life demand, nicely, that she return: for literary tours, readings, dinners with other couples.)

It’s in a letter from farmer Dawsey Adams (Michiel Huisman) that she first hears about the Guernsey Literary And Potato Peel Pie Society, an organisation long of name but short of official documentation.

After being created as a matter of urgency when a group of islanders are caught breaking curfew on their way home from an illicit roast dinner, the fictitious organisation is soon registered by their Nazi occupiers, thereby becoming an officially sanctioned society.

Luckily all its instant members love literature; they’re less keen on the potato peel pie (the opposite of me, as I tend to go to those things for the food).

Having agreed to write an article for The Times, Juliet impulsively travels to Guernsey for the Society’s weekly meeting; a decision which while initially welcomed, soon leads to wariness. It’s not quite the Slaughtered Lamb in An American Werewolf In London, but the locals sure don’t want outsiders writing about their war.

But it’s a story Juliet pushes to uncover, one that at its heart is about love: for a child, for each other, for the island, but also for literature. Books are their safe harbour, where they can lose themselves in other worlds.

The club’s members are quirky but believable. Isola (Katherine Parkinson), with her fortune-teller scarves and belief in reincarnation could easily fall into caricature, but Parkinson portrays her as someone warmly hopeful that one day her prince will come. And she has the funniest lines: “He likes men’s names?” she asks, perplexed, after Juliet has responded elliptically that Sidney would only be romantically interested if she were called Tom or George.

Postmaster Eben Ramsey (a generous Tom Courtenay) is accidentally funny and marked by the war – his description of Guernsey after the evacuation of its children (including his grandson Eli) is no less devastating because Eli is now home.

Only seen in flashbacks is the headstrong, moral Elizabeth (Jessica Brown Findlay), now “off island”; why and where are the mysteries Juliet strives to unravel. The answer to the first lies with the increasingly reticent Society members; the answer to the second, elsewhere.

Juliet lugs her clanky old typewriter around in her suitcase, resolutely wearing heels to explore the island. James is perfectly cast, driving home that writerly tendency to think of their readers rather than the people whose lives they want to expose, to break promises and confidences in pursuit of a story that only they could possibly tell.

Of course Juliet is attracted to the handsome Dawsey (the temptation, among these heady literary references, to refer to him as Mr Dawsey and enquire as to his annual income is overwhelming). He loves books, is good with his hands, and is never more gorgeous then when striding around the island in a flat cap.

The  contrast between Juliet’s urbane, New York-bred fiance and the Guernsey pig farmer couldn’t be more stark. (Micheal Huisman is a decent Dawsey and the farmer certainly comes alive during book club, but on the whole there’s not enough for the actor to get his teeth into. If it’s any consolation, I’ll soon be mixing him up with Matthias Schoenaerts as regularly as I confuse Lily and Gemma Arterton.)

This is a paean to bonds forged among people for whom books are not just their safe space but their salvation. They certainly love their literature. Watching them argue over literary heroines while drinking lethal homemade gin is an envy-inducing experience. When Juliet breathlessly reads a letter from Dawsey describing his love of books, she looks like she’s about to have an orgasm, something usually only achieved with a hardback after reading Nancy Friday or Anais Nin.

A heartwarming crowdpleaser, Mike Newell’s film is also an emotionally manipulative endeavour. And it works! “I don’t care for everyone to see me crying,” says Amelia at the end, as I retreated into my seat until the lights went up and everyone had gone.