You are here: Home / Film Reviews / Far From The Madding Crowd 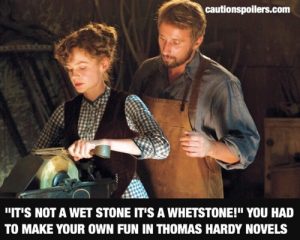 I went through a big Thomas Hardy phase back in my teens (when you want authors who truly understand misery piled on misery, with a bit of extra misery thrown in for good measure) though I haven’t read or watched any in a while. Hardy stories tend to start bad then spiral into despair and utter hopelessness – and as that pretty much sums up how I feel looking after my children, I need cheering up once I’ve finally got them to sleep, not a recap of my actual day.

This adaptation stars the brilliant Carey Mulligan as Bathsheba (known for all eternity to Doctor Who fans as the girl in the Weeping Angels episode) and Matthias Schoenaerts as Farmer Oak, who recently got naked in A Bigger Splash. I should say though that the nearest we get to satisfying the female gaze in this is when he gets all wet during a particularly exciting sheep dipping session.

Our heroine Bathsheba Everdene first spies dependable Gabriel Oak on the adjoining farm which he’s bought with his life savings (when you hear that you just know something’s going to go horribly wrong and he’ll be left penniless). Soon after their first meeting he comes over to her home, bringing her a gift of a motherless lamb to raise.

She seems delighted by this, though he’d definitely lose points with me bringing a present that requires work. That’s not really a present, is it? Especially if once it’s grown up he expects some of the mince back, or demands she knit him a nice scarf with the wool.

The present-not-a-present lamb turns out to be simply the first stage in Gabriel’s proposal of marriage to Bathsheba, to which end he offers her his farm, babies and – best of all – a frame for cucumbers. Plus the prospect of a piano a year or two down the line if she plays her cards right. And she turns him down! Seriously the lamb would put me off initially but the cucumber frame would’ve then secured my wifely duties for all eternity.

This being Hardy, having one’s proposal rejected is merely the first disaster in a catalogue of misfortune. Next thing, his whole flock of sheep throw themselves off a cliff to certain death. I hoped Bathsheba gave him his lamb back at this point – or at least offered to make him the world’s biggest shepherd’s pie (waste not, want not) but we will never know.

Poor Gabriel – after settling his debts – has to leave his farm, while Bathsheba’s star is rising thanks to her inheriting a farm from her uncle.

Bathsheba has other suitors though – local gentry Mr Boldwood (played with delightful self-repression by Michael Sheen), and Troy, a man whose name can only be mentioned with the epithets dashing, cad or bounder in front of it. The dashing Troy astounds her with his swordplay (not a euphemism, ladies – he actually whirls his three-footer around her and eventually chops off a lock of her hair). Despite, or more probably because, of Gabriel’s warnings about the dashing Troy,  she elopes with him though she does keep her nightie on the whole time (not a good sign on your wedding night).

You’ll be pleased to know that Troy is later assumed to have died, and at this point I was desperate for them not to have to wait seven years for him to be declared legally dead as frankly I couldn’t stand the thought of that much extra misery.

The performances are what holds this beautifully shot film together. Much as I love Hardy the adaptations can be a bit melodramatic, with characters often seeming to suffer more than Leonardo DiCaprio in The Revenant.  Carey Mulligan is absolutely brilliant – she can look young and vulnerable or reliably mature. Matthias Schoenaerts is magnificently self-contained and while he constantly looks out for Bathsheba even when she’s made wrong decisions, he’s not above making her work for his help. He’s certainly flawed. Michael Sheen is also excellent as rich neighbour Mr Boldwood – a man who clearly finds anything to do with relationships excruciatingly embarrassing.

Despite this Boldwood and Gabriel seem to enjoy a budding bromance as the story progresses, where they stiltingly talk feelings, but as they’re in love with the same woman it can never really take off.

The film is terribly understatedly sexy – at one point Bathsheba and Gabriel get soaked in their clothes when dipping sheep together, then he helps her sharpen a knife on a whetstone in the barn (imagine a ‘Witness / Ghost mashup set in in Victorian Dorset). But films like this can never be too explicit as we all know just how many layers they’d have to remove before being able to actually have sex.

Hardy genuinely understood the double standards women were and are held to, though that does make for some depressing tales. Though as much a theme in this adaptation is the sheep.  From throwing themselves over a cliff, to being offered as a present-that-isn’t-a-present, to suffering with bloat, sheep do seem to be at the root of all that goes wrong in this film.