You are here: Home / Film Reviews / The Commuter 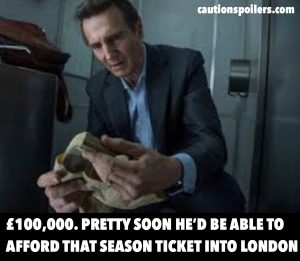 There’s almost no tension. It plays like several different genre movies one after the other. And that guy who scares the hell out of you on the train, ignoring all your leave-me-alone signals? Well that’s the hero. But yes, I did enjoy The Commuter.

A cautionary tale about conversing with strangers on public transport, imagine Korean zombie horror movie Train to Busan but with only one mad, staring-eyed person spattered with blood, and that’s Liam Neeson. Did I tell you he’s the hero? I did, didn’t I. This is Snakes on a Train, where you’re not sure who the snakes are.

Neeson is Michael MacCauley, and yes he gets to threaten people on the phone that if they touch his family he will kill them, or some variation thereof.

The last 10 years of Mike’s life have been pretty uneventful, and the film’s impressive opening sequence shows the repetition of his morning start to the day, a reassuring mundanity which in movies tend to lead to either ill-thought-out flings with murderous young women, or ill-thought-out attempts to make money. Though here it’s Mike’s attempts to preserve that suburban boredom that could lead to his downfall.

The 6am alarm, a family breakfast, his son lending him a book for the train, a lift to the station from his wife (Elizabeth McGovern); the only difference each day is the weather. But on this particular day, after the same old train journey to work, chatting to the same people he’s been talking to for a decade without knowing their surnames, 60 year old Mike is made redundant from his job selling life insurance.

Unwilling to tell his wife straight away, he heads to a bar in town with Murph (Patrick Wilson), his partner from his days as a cop, then catches the commuter train home.

Sitting reading his book he’s disturbed by a woman, Joanna (Vera Farmiga), who sits down opposite him. Mike tries to give her the brush off until his interest is piqued when she tells him she studies human behaviour: “My job is to answer one basic question. What kind of person are you?”

She poses a hypothetical query: if someone on a train asked him do something that would cost him nothing, just a little thing, for £100,000, would he do it? Michael is broke and his son about to leave for college, so the answer is most definitely yes, as we see a few minutes later when he’s in the train toilet retrieving a packet of cash. Though to be fair he could have got her on miss-selling as what she asks is most definitely not a little thing.

His task is to find someone on the train called Prynne, who has something stolen in their bag and is getting off the train at the (luckily far-distant) Cold Springs.

Initially driven by a desperate need for money, Mike soon learns that there’s no such thing as a free lunch. And as the phonecalls from the now-absent Joanna keep coming, sometimes it’s hard not to agree with her gaslighting that he’s to blame for what unfolds.

While Mike looked for Prynne, I searched in vain for tension. Oddly this meant I could sit back and simply enjoy the film, as I wasn’t particularly bothered about what happened to Mike or his family. If I’m honest I was more concerned about a couple of Mike’s commuting pals.

What tension there is comes from the action sequences which are shocking and sudden. One death in particular is a real jump out of your seat moment (though best not if you’re on a south of England commuter train, as some tosser WILL steal it while you’re momentarily in the air). Neeson may be an action star, and his character a rangy ex-policeman. But Mike is 60 years old and a decade out of the precinct.

The Commuter does feel like several different films, and while tonally it maintains a sense of desperation and menace, structurally it moves around. Thriller? Tick. Psychological drama? Tick. Disaster movie? Tick. Action film? Tick. There are even shades of an Agatha Christie whodunnit. So we do at least get our money’s worth.

But it’s most interesting when Mike doesn’t know who else could be involved, or who Prynne is; or which side, by searching for Prynne, he is putting himself on.

The ex-cop hero is a bit of a cliche but it works rather well here. Mike’s task would be impossible for anyone without that backstory experience (and he notices far more detail than most people would), but he’s been away from policing for long enough to still have something of the panic-stricken everyman about him.

The film is also strong on the kind of relationships we have with people we see every day on the way to work. Are they friends or acquaintances? What do you owe them and what do they owe you? And how much can they, or you, be trusted?

What I found troubling was his treatment of other passengers who may be Prynne, or part of the conspiracy, or may simply be passengers. Mike’s gradual disintegration as time runs out, striding then staggering from coach to coach interrogating terrified female passengers, is witnessed by staff and commuters alike. We’ve all got our weird passenger story to tell, and being trapped on a moving train with someone singling you out is a familiar nightmare for women. If I was them I’m not sure I’d be so forgiving towards Mike later on.

Most of the other characters are two dimensional. Luckily the ticket inspector adds some much-needed levity to the situation, and I was delighted to see Florence Pugh – so astonishing in Lady Macbeth last year – in a very different role as Gwen, a pink-haired student who may or may not be up to no good.

The Commuter is one of those movies that initially seems breathtakingly simple, then becomes so complicated you have no idea why he is doing what he is. I haven’t tried to think too deeply about the whole set up and it wouldn’t surprise me if the ins and outs of the story don’t stand up to much scrutiny.

But it’s fun to watch, and its shortcomings (flat characters, lack of tension, an unsympathetic hero, probably wayward plotting) are made up for by Neeson’s rather moving portrayal of a man crumbling under the pressure of his own shortcomings, and those realistically terrifying action sequences.

buy/rent on VOD, or buy DVD/Blu-ray/4k from amazon.com