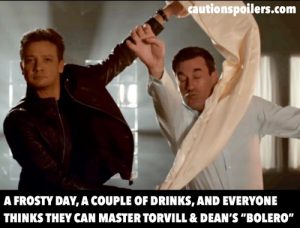 Five middle-aged men have been playing Tag for 30 years, with the whole month of May each year dedicated to the game.

It’s a way for them to cement their friendship, when many other people have lost touch with childhood friends as they marry, move away, get divorced, and change jobs.

Only one – Jerry (Jeremy Renner) – has never been tagged in all that time; and is, according to Hogan (Ed Helms), planning on giving up the game entirely after this year’s event.

The lengths they’ll go to tag one another are extreme. Hogan even takes a job as a janitor at the multi-million dollar insurance company where Bob Callahan (Jon Hamm, having a ball) is CEO. (Their initial scenes together are a joy, and set the tone for their maniacally important game).

It’s during Callahan’s interview with Wall Street Journal writer Rebecca (Annabelle Wallis) that Hogan’s janitor goes in for the kill with Bob and tags him; the resulting office pile-up leaves her convinced the game will make a much more interesting story than Callahan’s boringly on-message answers about insurance.

So off they go, picking up other group members en route – Sable (Hannibal Buress) from his therapy session, the always-stoned Chilli (Jake Johnson), plus Hogan’s lovingly competitive wife Anna (Isla Fisher), a sort of associate team member without playing rights – in their quest to finally tag Jerry before it’s too late. Preferably at his wedding to pregnant fiancee Susan (Leslie Bibb), helpfully arranged for the last day of May.

So desperate is Jerry not to be tagged that he hasn’t invited the others to his wedding – and once they’ve tracked him down, he only lets them attend when they agree to an official amendment, that no tagging is allowed during any of festivities (which for American weddings is several days’ worth).

Jerry has such form for big set-piece traps and distractions that no one is ever sure if anything about him is real. Chilli is convinced the whole wedding is an elaborate Truman Show. What is even real? How much is fake news?

The wedding? Could be fake pews. The rehearsal dinner? Fake dos. The miscarriage? Fake blues? Callahan following Cheryl (Rashida Jones), purposely invited by Jerry to distract his friends who had the hots for her at school, into the Ladies’ Room? Fake loos. Are all the guests just actors? Fake cues.

Jerry’s certainly organised. He’s super-fit, owning his own gym. His many friends and clients are always happy to support him (after Hogan attempts to bring him down while dressed as an elderly woman, and Jerry responds with some killer moves, the security guards greet the two of them with “hey Jerry, this old lady bothering you?”).

And he’s constantly upping his game; breaking into his house, his friends find chloroform, maps of the city, and most inexplicably, “five different hats”.

His outlier status makes it easier for him to identify his friends’ weak spots. Sable is a dry observer but also disproportionately distracted by his own thoughts. Divorced and broke, Chilli is a grubby dopehead. Hogan lacks confidence. Callahan is overflowing with it (“you get Bob talking about himself, it’s like a feedback loop” surmises Hogan accurately). Anna is hugely competitive but very loyal.

But there’s a camaraderie in losing, in bonding together to plan for their common goal – tagging Jerry, who’s finding that winning all the time makes you the outsider.

This is a film that certainly goes close to the bone, joke-wise. There’s an extended gag related to Susan’s pregnancy complications which they call Operation Miscarriage, and as someone who’s had several miscarriage operations (see what I did there) I was certainly wincing.

At one point they’re about to waterboard someone for information on Jerry’s whereabouts until they realise that waterboarding is “a war-crime. That’s not really who we are.”

But you know what, it actually works (just!) thanks to its mix of cruel humour and slapstick action (it actually reminded me of recent comedies The House and Game Night in its determination to go to the edge of the cliff, peer over, then jump right into the abyss).

The fight scenes are mostly slow-motion, as Jerry jumps and twirls, throwing himself out of windows, firing complimentary donuts, kicking his friends in the nuts. The violence is an odd mix of hilarity and pain – even Anna gets a battering, but she doesn’t care.

Tag is mostly funny and mostly fast, though the nature of the story makes it repetitive; pop out for a few minutes and when you come back it’ll probably be another entertainingly well thought-out Jerry set-piece leaving the others looking like losers, or the non-Jerrys sitting in a basement debating whether or not something is real.

But the characters are well-drawn, and treated surprisingly equally. The chemistry between the five men is spot on and I loved how accepted Anna and Cheryl are into the fold.

Wanting to reconnect with something happy from one’s childhood isn’t in itself childish, and seeing the glee with which Callahan leaves his job behind is a delight. This isn’t as juvenile a movie as some of the gags imply.

There’s some hamming though not from Hamm who has presumably passed it on to Helms by touching him on the shoulder when he wasn’t looking. Rebecca, though, is vastly underused, her lack of visibility made worse by Anna’s deliciously scene-stealing aggression (Fisher’s portrayal of the clear-sighted, entirely unsentimental Anna is one of the film’s standouts).

This is not a chin-scratcher movie and it doesn’t take much analysis to work out that ultimately Tag is about keeping friendships alive. “Tag is more than a game, it’s a way of life”, says one, though really the game is both the glue and the driving force for their relationships with each other, rather than an end in itself.