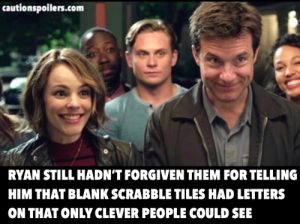 This is a film about sperm and an egg, and what you can create out of them.

In this case a fast paced, laugh-out-loud comedy with a nasty streak that pushes the envelope til the last frame.

The sperm are Max’s (Jason Bateman). Their motility isn’t great, because of stress, and when the doctor asks how long Max has been stressed for, it turns out since childhood.

And it’s all down to his super successful brother Brooks (Kyle Chandler), a Wall Street trader who’s back in town, and about to turn up in the red Stingray car Max has coveted since they were boys. According to Max’s doctor, sibling rivalry is “very powerful. Cain and Abel… the Baldwins…” and for Max, his brother getting to the top trumps his own lower-key lifestyle.

And the egg? That’s a giant, jewel-encrusted monstrosity worth millions that Max and his friends have to steal from a gangster and give to another gangster in order to save Brooks, who’s got himself in with a bad crowd, no not the Wall Street traders.

Max has more going for him than he realises; his friends, but mainly his wife Annie (Rachel McAdams). Apart from Brooks, Annie must be the most competitive person Max has ever encountered. They meet at a pub quiz, get engaged with a stunning solitaire ring over Charades, and their first wedding dance is one of those video games where you jump on pads mimicking the dance moves on the screen (if you know the word for this, please let me know as it’ll really help with my word count).

Max, Annie and his friends are obsessed with games. But their weekly Game Night is also about friendship, a chance to connect; four bright and quick-thinking friends (plus Ryan).

Ryan (Billy Magnussen) is stupid but not 100% stupid. You’ll Never Guess How Only 99% Stupid Ryan Is, one could say, bearing in mind where he gets most of his trufacts. Childhood sweethearts Kevin (Lamorne Morris) and Michelle (Kylie Bunbury) are adorable, though their marriage almost hits the rocks when a game of Did I Ever reveals she once slept with a celebrity when they were on a break.

No longer welcome at Game Night is neighbour and cop Gary Kingsbury (Jesse Plemons), whose invitation was withdrawn when he and his wife divorced. Gary now lives a lonely life with one of those small fluffy white dogs always known to me as “tampon dogs”, a name I rather regretted as the movie progressed and the blood started flowing.

I have to admit that, just as none of the games gang believe Ryan’s Buzzfeed-obtained claim that rich people pay poor people to beat each other up in Fight Club evenings, I had no idea game nights were A Thing: I downloaded the Scrabble app so I’d actually have someone to play against; my 8 year old beats me at Jenga; and Hangman with my 6 year old is even more of a guessing game than it should be, thanks to his inability to correctly spell anything other than “boobies”.

Brooks is a mastermind at undermining his brother, pushing him until he’ll snap. But the next Game Night is going to be different. For a start, Brooks insists he host the whole operation.

He’s arranged a murder mystery, which is certainly a mystery as during the final 20 minutes I had no idea what was going on. Brooks fakes his own kidnap, and the gang have to decipher a series of riddles to find him – the winning couple getting that Stingray car.

And don’t worry about Ryan. In place of his usual Instagram-model Games Night dates, he’s invited Irish work colleague Sarah (Sharon Horgan), who seems articulate and intelligent, and not simply because she’s sitting next to Ryan.

Unfortunately Brooks’ abduction charades become a little too real, and after the fake FBI man arrives to hand out the first clue – doh – two real heavies break in, chasing Brooks round the house as he tries to fight them off with knives, guns, kitchen crockery, and a fireplace.

While this Wick-like punch-fest goes on around them, the others oooh and ahhhh over the high-quality cheese Brooks has provided, and comment on the acting abilities of the genuinely unconscious fake FBI man lying on the floor.

Games may be trivial. Pursuit by gun-toting heavies? That depends on if you know they’re heavies or think they’re lightweights from the local AmDram society.

As the three couples hunt the gangsters, rescue Brooks, lose Brooks, and enjoy an egg hunt – pausing only to find out the answer to that eternal question, whether the struggle is or isn’t real –they’re constantly bickering. Kevin and Michelle over her A-lister love-in, Annie and Max over whether to have a baby, Ryan and Sarah over whether either could possibly fancy the other.

The dialogue is rapid-fire and witty, lines fitting together like a jigsaw; the physical comedy reins in just the right side of slapstick. I was shrieking with laughter watching Annie scrabble about in her husband’s arm attempting to remove a bullet, using a drugstore sewing kit and unlocking her phone with her nose so she could read the alt-right website article on how to do it, while Max bit down on a squeaky toy burger in his mouth.

They don’t have a monopoly on the jokes though. Sharon Horgan’s clever working woman who thinks Ryan is an idiot but is still offended that he isn’t attracted to her is all of us (well all of me anyway).

Though I can’t say I relished Plemons, so creepily menacing as weird cop neighbour, especially when Max drafts him in to (unwittingly) assist.

It doesn’t always make sense. Several times I thought “but why not just kill Brooks?”, and that was before the murder mystery even started. At a bridge for a key handover, so many people claim responsibility for the mayhem it’s like an underworld version of Spartacus, and I had to ask myself what’s up.

There’s a genuine (and I mean this nicely) mean streak in Game Night. The directors seem to delight in squeezing the last vestiges of smugness out of the friends, who think nothing of cheating their way to victory; or of convincing us of something then laughing at us.

And the balance of jokes and genuine threat – along with the constant new twists – is nothing short of audacious.

available now on vod, or pre-order on blu-ray and dvd from amazon.com (released 29 May 2018)