You are here: Home / Film Reviews / The House 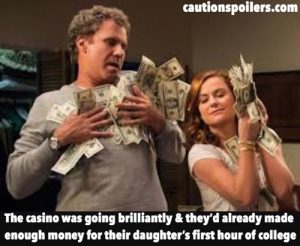 It’s fair to say that, just as maths whizz Frank Theodorakis points out, The House always wins. And it certainly did with me, despite my best efforts to walk away, like a gambler who believes themselves reformed.

I started watching this movie on a flight, but gave up half way through – the comedy was sparse, and tonally by that point it was all over the place, with Will Ferrell as sweet dad Scott madly overacting as he wielded an axe to install fear in people who were supposed to be his friends and neighbours.

It was only after googling the movie once I got to my destination that I discovered that Jeremy Renner no less popped up later as mafia boss Tommy Papouli, in what is basically an extended cameo (A-listers appearing for a few minutes seems to increasingly be a thing).

I watched the whole film on my return flight, and I’m glad I did. The House is by no means a great film, and it should be funnier. But it’s a bleaker and more interesting comedy than I originally gave it credit for. And bleak but interesting comedies that don’t quite work are still worth a look.

The mix of silly slapstick and brutish fear still doesn’t quite work, but Papouli’s comeuppance, involving a series of accidental accelerants as Scott and wife Kate (Amy Poehler) are trying to help him extinguish his burning arm, is hilarious.

Scott and Kate Johansen have discovered they have no money for their daughter Alex’s college fees. She’s due to start at her chosen institution after the summer holidays, and they’ve been relying on a town scholarship which is given annually to a top pupil.

Alex is meant to be this year’s recipient, but there’s no money for it, as dodgy town councilman Bob Schaeffer (Nick Kroll) has suggested a town swimming pool instead.

Scott and Kate are not stupid but they are guileless – Scott is convinced he’s discovered $401,000 in the bank until it’s pointed out to him that the account is called a 401k account.

Luckily their neighbour Frank (Jason Mantzoukas) – who is about to be divorced by his wife for a gambling addiction, and is living in their old home waiting for foreclosure – is as good with numbers as Scott is bad, and he comes up with a plan to start a casino in his large and empty house.

The trio plan is to keep going until they reach $500,000, then close down their illegal gambling den and split the proceeds.

It starts off well, and Frank is soon upgrading both the casino environs and the clientele. Until someone is caught counting cards, and after a very ineffectual grilling (not literally, that comes later) by Kate, Scott and Frank, Scott accidentally chops off the cheat’s finger with an axe.

Rather unbelievably this leaves their friends terrified of Scott, despite him looking like, well, Buddy from Elf. Scott even acquires the nickname The Butcher, and everyone who has been extended a line of credit at the casino suddenly starts repaying their debts.

The three friends also start to enjoy their new found notoriety, traversing the town claiming back what is owed, while randomly attacking innocent bystanders on the way for kicks.

And then Carl the cheat – a man now one digit short of a full hand – returns with his boss Tommy Papouli to exact revenge and claim the casino’s profits. They’re not the only ones after the cash though, as unsurprisingly it’s hard to hide a money-making scam from a dodgy city councilman.

The House certainly picks up near the end though there’s also a lot that doesn’t make sense: Scott and Kate don’t appear to have done any financial planning for their daughter’s education over the years, yet they presumably could never guarantee she would win that year’s scholarship even if it had been available.

But there are some good jokes (though not enough) and it’s actually rather sweet to centre a middle-aged couple who clearly really love each other, and are perfectly matched because of, rather than in spite of, their imperfections.

If Ferrell had toned down the wide-eyed overacting at times, the rather dramatic shifts in tone would have worked better. Physical comedy that didn’t quite lurch into slapstick would have helped too.

Poehler makes the most of a script that’s not quite funny enough, and becomes increasingly glamorous as Kate becomes too caught up in their new world of sharp suits, lobster dinners and weed.

The most interesting character by far though is Frank, a very clever man who only really wants to win back his wife, without realising that starting a casino (even one where you don’t play the tables yourself) is not the best way to prove that you’ve given up gambling.

Frank is more worldly than Scott and Kate but he is so focussed on his own prize, his wife, that for him everything is aimed at that, and he fails to keep track of what else is happening.

Renner is very funny, even when kidnapping Scott and Kate’s daughter (“no one cares if you die” he tells Frank, refusing the man’s offer of himself as an alternative hostage). Just by turning up as mafia boss Papouoli he takes the movie up a level.

The movie does make clear that even the most middle class couples can descend into thuggery given a chance – from Scott’s limb-chopping to the rough and ready fight club that develops in the casino during the early days. And what is the difference between their behaviour and card-counting Carl and his vicious boss apart from degree?

Rather admirably, there’s little comeback for the Johansons or Frank – a decision that makes The House more interesting. It just needed more comedy, the blacker the better.