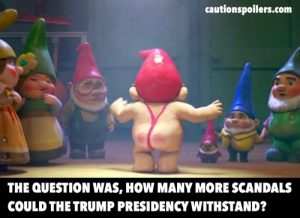 The cleverest line in Sherlock Gnomes, the sequel to 2011’s Gnomeo And Juliet, comes near the end – when Sherlock’s enemy, Moriarty, tells the great detective “I don’t need you!”

Apparently lots of people are queuing up to have Moriarty as their nemesis, which is a funny and refreshing response to the usual movie dynamic that good guy and bad guy actually need each other, and can’t survive on their own.

Moriarty also tells Gnomeo “you don’t get one liners” which is, sadly, true. This is another film which is quite amusing if rarely laugh-out-loud. And that modern staple of kids’ animated movies, the self-referentialism, the meta-ness becomes rather tiresome; the lines aren’t that clever and just serve to downplay a movie we’ve actually paid to watch.

Luckily it is occasionally mildly subversive: I liked the muttered comment about nepotism after Lady Bluebury (Gnomeo’s mum) and Lord Redbrick (Juliet’s dad) announce to the assembled gnomes that moving into their new home is the right time to hand over the reins of power, to – yes – Gnomeo and Juliet.

Gnome owners Ms Montagu and Mr Capulet have decided on a move to London, to a house with a garden that certainly needs some work; so Juliet, best get cracking, love. (Not literally, obviously. The frosts will see to that soon enough.)

But first Juliet (Emily Blunt) and Gnomeo (James McAvoy) climb up the tall wooden frame in the garden so they can enjoy a 360-degree view of their new environs. I must say, gnomes aren’t natural climbers, social or otherwise, and considering their most feared outcome is being smashed, I just hope their stunt doubles held out for costumes lined with bubble wrap.

Sadly, the gnomes have barely started to settle in before most of the group disappears. (What is the name for a group of garden gnomes, by the way? A Shattering? A Smithereen?)

They are fresh from what they believe is a final showdown with Moriarty, the always smiley, always evil face of a well-known pie brand; who during a museum contretemps (there’s an Affray Bentos joke in there somewhere) appeared to have met his maker under a clatter of dinosaur bones.

Sherlock is just as you’d expect: proud, arrogant and self-important. As he and Juliet search for clues – proper clues, on the backs of cards with a big M for Moriarty on the front – she becomes increasingly irritated, especially when she is forced to be the back end of a pantomime squirrel.

It’s in a toyshop looking for another clue that Juliet and Sherlock come across Irene (Mary J. Blige), Sherlock’s ex-girlfriend, and boy has he been punching above his weight.

Sultry yet fiercely feminist (Irene, not Sherlock), in a long pink dress with a huge pink hat, drinking tea at a dainty table, she reminded me of sorceress Elaine in The Love Witch‘s plushly pink and white ladies-only tearoom.

Next to the glamorous Irene, poor Juliet does look rather chunky and frumpy, though to be fair she was made that way. But both have depths of self reliance – Juliet just needs to be reminded of it: “A man doesn’t make you strong”, Irene gently reminds her.

There’s a twist that I didn’t spot, so feel free to put this review down to sour grapes (in my defence, I may have missed a vital clue, as earlier I’d had to rush my 6 year old out to the loo after a shriek of “I’M BURSTING MUMMY!”, and you know how everyone moans about talking in cinemas).

Luckily there was another twist, which I spotted, so who says kids’ films are too clever for middle-aged women.

All children’s movies need a message, and hopefully one day it’ll be about not picking their noses and then chasing their brother round with *it* on the end of their finger.

But for now we’ll make do with respecting one’s friends and not taking them for granted. A decent one, and a message some of the characters definitely need to learn. Though perhaps not Juliet; it’s implied that she’s at fault for ignoring Gnomeo while sorting out the new garden for everyone, which rather smacks of expecting her to drop everything she’s doing to indulge him.

The film is made by Elton John’s Rocket Pictures, and several of his songs are used, which will go over the heads of most children. Though despite my misgivings about the movie, I’d happily pay a fiver to hear Don’t Go Breaking My Heart, Elton’s duet with Kiki Dee.

And of course the voice cast list is a who’s who of British thespian talent, and appears to be missing only Gemma Arterton and Lily James – presumably still stuck somewhere in their 1940s tweed skirts, clattering away on their typewriters.

The film is sweetly animated, though the story is uninspired – I’d have preferred Game of Gnomes, Indiana Gnomes, or indeed Spider-Man, all of which are put forward as alternatives at the start.

Sherlock Gnomes is ideal for smaller children – my 6 year old in particular declared it the best film ever made when we came out, and yes we have seen Paddington 2. Both he and his brother thought Mankini, a gnome resplendent in a pink one-piece with buttocks permanently on show, was one of the funniest things they’d ever seen; surpassing even naked Gru in Despicable Me 3.

It remains to be seen what effect it will have on my boys longer term; how much nagging I’ll be subjected to in the ornaments section at the garden centre next time we visit, or whether they decide to take up fishing while sitting on a toadstool wearing a mankini. Or indeed sitting on the loo in the manner of Barry The Toilet Gnome, though to be fair my youngest spends hours in there already.