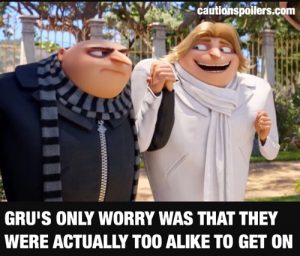 What with Okja and its superpigs and now Despicable Me 3 with a whole island of the pink curly tailed cuties, I’m becoming convinced there’s a conspiracy to wean me off bacon sandwiches for life.

Gru (Steve Carell) is still managing to be virtuous, working for the Anti-Villain League (AVL) with his wife Lucy (Kristen Wiig) and looking after their three adopted girls – Margo, Edith and unicorn-lover Agnes.

The couple are trying to bring super-baddie Balthazar Bratt (Trey Parker) to justice. A 1980s child star who still sports shoulder pads and a mullet, Bratt has never forgiven or forgotten the cancellation of his TV show “Evil Bratt” when his voice broke and teenage acne set in.

Now he’s planning to get his own back on Hollywood, 30 years too late. And although revenge is always a dish best served cold, Bratt retains the childish hotheadedness of his youth. What he lacks in maturity and clothes sense he makes up for with a fantastic 1980s tape collection though – and yes, enough time has gone by for you to finally admit that you really like Sussudio by Phil Collins.

Meanwhile – and this is where I have to take a deep breath – the AVL has a new boss (Jenny Slate), Gru and Lucy are fired, most of the Minions are banged up in prison, there are pigs EVERYWHERE, and a unicorn hunt. Oh and Gru finds his long-lost twin brother! Who is rich! And is identical to Gru apart from his mass of long silky blond hair. So, not really identical then.

If you think that lot is confusing they are just some of the subplots. And that is the problem with Despicable Me 3. This is a film that is simultaneously both too busy, and takes an age to get going. The dialogue isn’t particularly sparky either (apart from the Betamax gag – look it up, kids). Though in its defence the visual gags are considerably better, from the blink-and-you-miss-them background shots (kids sliding down a giant grater on blocks of cheddar during a cheese festival) to bigger set pieces (Dru in his all-in-one suit rolling down the outside of a building like one of those party bag sticky man toys that are soon covered in that weird fluff that appears from nowhere in your clean house and are then useless for ever more. Though actually Dru doesn’t end up covered in fluff, something for Continuity to look at maybe).

Also in the film’s favour is the superb 80s soundtrack that steamrollers everything in its path – Bad, Take On Me, Get Into The Groove, Money For Nothing, even 99 Red Balloons by Nena. In fact I’m surprised they haven’t just released them all on an accompanying album and Called it Now That’s What I Call… Despicable Me 3.

Gru and Dru are like two middle aged businessmen having a midlife crisis, as they whizz about in Dru’s supercars and superboats. Gru wants Dru’s lush blond mane, mansion and millions. Dru wants Gru’s knowledge of villainy, and also their evil father’s posthumous approval. He’s desperate to have some fun and uses his disarmingly infectious lust for life to encourage Gru to go back to the Dark Side. Luckily Gru manages to find a way to stay on the straight and narrow while also indulging Dru, bonding with his new brother, and requisitioning his many expensive modes of transport.

As a kid and adult-(un)friendly villain Balthazar Bratt ticks the boxes, from his name and TV show to his outfit – he looks ridiculous and would probably sell his own grandmother for a VHS video recorder.  And though his bitterness means he lacks the metaphorical ability to move forward, he certainly does so literally, moonwalking across the sea or challenging enemies to dance-offs.

There are some cliches I’m rather tired off and shouldn’t really be in any films let alone children’s ones now – the overweight, lonely child who Lucy encourages Margo to befriend and then becomes too keen, followed by his even fatter and warty mother, are unnecessary and not funny.

The cast is top notch though many appear fleetingly then disappear, not unlike the subplots. Jenny Slate is there for about 10 seconds, and listen out for Julie Andrews’ turn as Dru and Gru’s mom – flattening poor Gru’s self esteem with “I had second choice”, as she explains how after their divorce his dad took Dru and she was left with The Other One. Kristen Wiig is massively underused as Lucy, who has very little to do apart from “still figuring out this parenting”. Whether she’s too controlling or gives the girls too much freedom it always seems to be the wrong choice, and after 8 years of rather haphazard mothering I’d love to reassure her that she’ll soon get the hang of it, but actually it’s like that forever, Lucy.

I’m a classic 80s kid myself (rara skirts, wedge haircuts, fingerless lace gloves – laugh at these at your peril if you see me on the school run) so I was going to suggest this as the perfect mum and child movie, until I remembered that I’m older than god and a lot of mums of pre-teens won’t actually remember the 1980s.

But it’s still worth a watch, and a singalong, if only so you’ll understand why we behave as we do when the DJ starts his classic set at weddings and we all hit the dancefloor.