This film is a U which means anyone can see it even little kids. It is a little bit scary though because of the cat costumes. 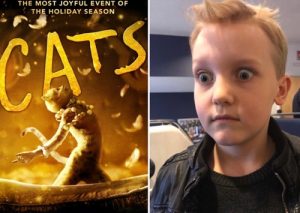 I saw the trailer before and I thought the cats would be in a house a lot of the time but when I saw the film they weren’t.

It looked weird because it’s people dressing up as cats but they’ve got real hands. They look creepy.

When we went to the cinema I thought something was going to go wrong, then after the first song the film just stopped and mum had to go out to speak to someone. Then we could see them in the projectionist room trying to fix it. We had to wait quite a long time and I thought “what is the point of me being here” then it came back on.

Soon I got what the movie was about, and it was about the best cat at singing gets another life. I don’t know if this is as well as their nine lives. (Because there are these myths about cats doing such dangerous things they have to have nine lives.)

I didn’t have a favourite cat in the film because they were all horrible. I like Taylor Swift, not dressed as a cat though.

My mum liked it more than I did because she liked the songs. But I thought there were too many songs in this film, and I don’t understand what Jellicle Cats means. I asked my mum and she didn’t know either.

In the middle I needed the toilet and mum came with me in case I ran home because I didn’t like the film.

The film was too long. I like Taylor Swift anyway but it would have been better if Billie Eilish was in it dressed up as a cat.

When we came home I watched Johnny English Strikes Again which is my favourite right now. It’s really funny and Volta the bad guy has a really cool house.

Read his mum’s 2-star review (not suitable for children!)