You are here: Home / Film Reviews / Pride And Prejudice And Zombies 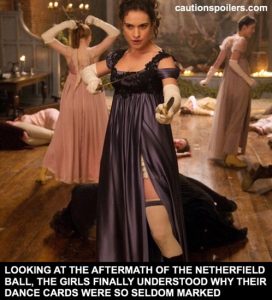 As the voiceover says early on in Pride and Prejudice and Zombies, “keep your swords as sharp as your wits. As the ultimate battle between the living and the undead has yet to be staged.”

The beauty of a Jane Austen  / zombie mashup is that you know exactly what’s going to happen in both genres, and the basic story follows the well worn path of Pride and Prejudice. We are in early 19th Century England and though the usual Austen preoccupations are still very much to the surface – did I hear you say that young man has three thousand a year? – there is now another threat, a zombie infection that has been brought to these shores with the merchant vessels bringing spices from the New World.

A bite from an infected undead will start things off, with the process completing after their consumption of human brains – resulting in full zombification, a grey pallor and blood and general gristle despoiling one’s lovely bonnet, or officer’s uniform. And these zombies do seem rather more intelligent than the average human, learning to set traps for the uninfected (as Matt Smith’s Mr Collins says, “before we know it they’ll be running for Parliament”.)

The country has been under siege for some time now. Some areas of southern England have been cleared of zombies, but Colonel Darcy (Sam Riley) is still pleading with people to be on their guard, advice that often falls of deaf ears as evidenced by the zombification of a whole whist party early in the film. (Mr Darcy is, as usual, rude, surly, rolls his eyes a lot at people and looks good in ruffles. So me, basically, if I lived in the 19th century and was called Mr Darcy.) He uses flies to spot someone who is infected but has yet to fully turn – whoever the flies land on is already infected and soon to zombify.

Sensible if careworn Mr Bennet (Charles Dance) and silly Mrs Bennet (Sally Phillips) live with their five daughters (Jane, Lizzie, Kitty, Lydia and Mary) in a large rectory, Longbourn, that – thanks to the practice of primogeniture – will go to a distant male cousin on Mr Bennet’s death. Once you understand that their home will be ripped from under them its easy to see why Mrs Bennet is so driven, to the point of embarrassing herself and her family, to get her girls married off and married off well. (For young British and American actresses, playing a Bennet sister must be a rite of passage, though they are probably all auditioning thinking “I’m not established enough yet, please don’t let me be the plain, boring one”).

However rather than sitting around learning how to survive marriage by sewing samplers in the firelight, Mr Bennet has ensured that his daughters will have a good shot at surviving the zombie apocalypse itself. They are all experts in fighting with weapons and martial arts – as they get ready for a local ball they do up their bodices, pin their hair, then stuff knives and guns in holsters round their stockinged thighs.

And it is after witnessing the Bennet girls – particularly Lizzie (Lily James) – despatching the whist party zombies who have turned up at the ball, that Darcy, who is there with his friend Mr Bingley (Douglas Booth) falls for her. Bingley is by then already enamoured with Lizzie’s beautiful and accomplished older sister Jane.

All the other expected characters are here, but with a twist. Lady Catherine De Burgh (a fabulous Lena Heady, who I have been in love with since she was Queen Gorgo in 300) is a zombie-killing machine – dressed all in black, her black hair piled on top of her head and a black eyepatch over one empty socket, she is the best swordswoman in Great Britain and dispatches the undead with aplomb.

Matt Smith is brilliant as Mr Collins, sorry Parson Collins, as he keeps reminding us. The cousin of the Bennet girls and Longbourn heir, he claims to have “the talent of the delicate compliment”, and he does indeed dole out compliments so subtle the recipients are never actually aware of them, instead being perfectly clear on his intentions to simply find a wife, any wife.

Silly Lydia, one of the young Bennet sisters, runs off with the not-what-he-seems-and-then-some Mr Whickham, who has found a way to subdue zombies in the hope that they can live side-by-side with humans, rather than teeth-by-arm. Despite these trials, and the will-they-won’t-they nature of Lizzie and Darcy’s relationship, it all ends happily. Apart from the zombie thing.

The film boasts some good zombie set pieces. “Mrs Beecham’s orphanage” seems to consist of greying zombie children staggering around the local woods and I’ve had liked to have seen more of that backstory. We also get a couple of obligatory scenes where loads of zombies pour down a hillside.

Unfortunately there is also that rather horrible undead trope, which I can really do without seeing EVER AGAIN, the zombie mother with zombie baby. I know, I’m doing the old “since I became a mother I feel things so deeply!” thing but so far I’ve seen a version of this in Girl with All The Gifts, and Pandemic, and I’m rather sick of seeing grey, blood-covered babies being carried around by grey, blood-covered women whose arms are about to fall off.

Ignore Pride and Prejudice and Zombies‘s poor reviews and lack of box office success, as it’s really rather a blast. My concern that it would be a one-joke parody stretched out to feature film length turned out to be unfounded. It would also have made a much more fun Sunday night serial than a lot of the interminable classic adaptations we Brits have had to sit through over the years. Admittedly no one is going to be surprised by what happens. Everyone knows the bones of Pride and Prejudice, and we all know that most zombie films end in a pretty grim way. Indeed Mr Wickham (Jack Huston) is clear that zombies multiply far faster than humans can procreate.

buy / rent on vod, or buy dvd or blu-ray from amazon uk

buy / rent on vod or buy the dvd to blu-ray from amazon.com