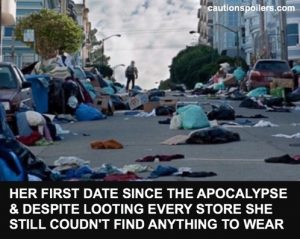 God why are zombies always so MESSY? Streets strewn with debris, rubbish everywhere, sofas and chairs lying in the road, any old how. Tidy people just don’t seem to succumb to these near-constant apocalyptic worldwide infections, do they. They should use this information when creating a vaccine. Or maybe the tidy people are simply stuck at home, folding t-shirts the approved Marie Kondo way, and never come into contact with an Infected.

I didn’t hold out much hope for Pandemic but actually it’s a pretty good film. Shot on a low budget, this means that most of the scenes don’t involve hoards of Infected wandering around big open areas – instead we get maybe a dozen particularly violent Infected in dark, confined spaces, jumping on rescue buses while the occupants fight back. This makes the film pretty claustrophobic as you don’t even feel the characters are safe indoors.

There’s been an infection pandemic and society has collapsed. We don’t see the exposition scenes which is a shame as I love watching the gradual realisation that the mayhem on the streets and staggering glassy-eyed people covered in blood isn’t just your normal British Saturday night but actually the start of the end of Life As We Know It.

New York has Fallen and not even Mike Banning could help them now. Lauren Chase, a doctor who had been working there on a possible vaccine, is now in LA, ostensibly to help in the search for survivors. However she’s actually there to find her own husband and teenage daughter who are somewhere in the city – possibly at their home.

The facility she is based in holds patients at each stage of infection – eventually many are euthanised though Stage 1s can be treated. Victims are held in cells, and Dr Greer (Paul Guilfoyle) shows Lauren victims at every stage of infection. Starting with flulike symptoms, it then moves on to blood oozing from eyes and orifices, aggression, hibernation, then utter rage and violence. (Honestly so many zombie infections start with flue-like symptoms I completely panic whenever I feel weak, start stumbling around, look grey-faced, and forget everything. Then I realise that’s just been a woman in your 40s and actually I’m completely normal.)

She’s assigned a team who are going out into downtown LA (not the suburbs which are apparently still pretty but massively overrun with the Infected) on a school bus to look for survivors. In their case they’ve heard there are several holed up in a school with a doctor.

Rachel Nichols as Lauren goes through the traditional learning curve of a newbie out on the front line of the apocalypse, learning quickly that being nice isn’t an option any more – and nor is moving slowly. But though it’s a well worn arc she plays it well.

Alfie Allen, who I must confess used to massively annoy me, is great as the unit’s driver Wheeler, who shows real courage at the end (He was great in John Wick too. I really must stop going on first impressions, I seem to spend my life watching films and grudgingly having to accept that someone I previously thought was an idiot was actually only playing an idiot).

Pandemic really gets across that it is survival on a knife edge. Greer is proud that they’ve survived “for 31 days”. So just a month. I’ve been in Christmas checkout queues longer than that, though of course we had supplies. And it turns out that the people on the survivor runs (navigators, drivers, etc) have to forage for their own food while out on the streets, it isn’t provided for them. It really is survival of the fittest even after seeming rescue.

One zombie / Infected trope I’m getting quite tired of does appear – the dead or zombie baby being soothed by a mother who doesn’t believe there’s anything wrong. I find these scenes upsetting for lots of reasons (I know I know, it’s a horror film!) but it’s starting to become just a way to deliver a quick and easy shock to the audience. I could do without seeing it again.

There is though a brilliant scene where an uninfected woman is used as bait. It’s really well done and completely took me by surprise.

The film isn’t really found footage but it is mostly shot via headcams on helmets. The jiggling around just adds to the unsettling nature of the movie. At one point we even see  – via the headcam – cannibalistic Infected eating one of the main characters. And it’s more than just a pandemic movie – everyone there has their own personal reasons for being there and they’re not scared to put others at risk to get what they want.

Pandemic is well worth a look, though if you’re a video game fan the use of headcams will probably seem old hat to you. I’m not a gamer (I played a video game ONCE in 1999 and everyone actually sat there on the sofa, aghast, thinking I was playing deliberately badly when actually I WAS DOING MY VERY BEST, FOLKS) so to me it’s an interesting, jolt-filled (in every sense) welcome addition to the apocalyptic infection genre.