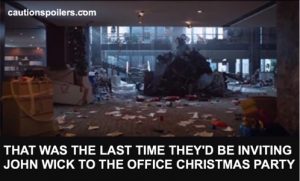 While by no means a Christmas turkey, this isn’t quite a Christmas cracker either, which is a shame considering the calibre of the cast – and the fact that at this time of year we’re often full of goodwill to whatever festive movie is released.

It’s years since I went to an office Christmas party and things have definitely moved on. Now you don’t photocopy your boobs, instead you get a guy to 3D print his dick. And you don’t need to listen to your boss’s dull stories over a glass of bad white wine when there’s cocaine in the snow machine.

Having said that the basics are still the same. It starts off with high hopes, then everyone stands around with a drink feeling bored while a couple of really loud people try to get the party started, then it all goes a bit mental and the next morning everyone is amazed they still have a job until they see the state of the office then they realise they don’t have an office. Or a job.

Clay Vanstone (TJ Miller) is the favourite, stoner-ish son of the late founder of of Zenotek, a data company. He runs the Chicago branch while hard-as-nails sister Carol (Jennifer Aniston, delightfully evil) is interim CEO and expecting to be made permanent by the Board.

The company is underperforming so Carol, a woman so nasty she probably gets her 360-degree appraisals done by Beelzebub himself, tells Clay that 40% of staff must go or the branch will close. Oh and she’s cancelling their office Christmas party set for that night.

There’s one final meeting that might just save them, scheduled for that afternoon when they will be pitching to IT executive Walter (Courtney B Vance). But at his meeting with Clay, CTO Josh (Jason Bateman), and technical wizard Tracey (Olivia Munn), Walter decides not to give them the contract.

With Carol away, the team decide to resurrect the party and invite Walter in the hope of still closing the deal. Walter agrees to come to the party and Clay sets about spending the last of his own personal trust fund to make it the Best Christmas Party Ever.

The party, organised in only five hours, includes a live nativity scene, real reindeer, an ice statue delivering eggnog through its penis, and even a real baby Jesus (well a real baby anyway).

The jokes in Office Christmas Party – and there are some great ones, including a gag stretched out over an hour involving a small child and an iPad – don’t appear often enough and the film, like all Christmas visitors, slightly overstays its welcome.

Luckily there’s an enjoyable subplot involving a manager’s fake girlfriend who turns out to be an escort, which works because the girl’s pimp, Trina, is played by the great Jillian Bell.

And thanks to Trina we finally get to see a nice, more helpful side to Carol, albeit while she’s holding someone’s fingers backwards until they crack.

There is some hilariously obvious product placement, which I can’t believe ever works. Maybe they’re hoping we’ll all come out of the cinema, relax into the back seat of our Uber with a bottle of Casamigos tequila while dreaming about a Dell server appearing in our stockings on Christmas morning. Oh.

There’s even a car chase, and an attempt to jump the gap of one of Chicago’s bridges as it rises. (I’m sure Keanu Reeves tried to climb across the same rising bridge in Chain Reaction 20 years ago. Truly there are no new stories to be told in films).

The morning after the party the office looks like if Carlsberg did apocalypses. If that’s how the end of the world looks then count me in. Though it does all get very technologically sentimental at that point and even the actors looked a bit embarrassed.

Olivia Munn is good as Tracey, apart from the lack of chemistry with Bateman. She and Clay are meant to have an “are they/aren’t they” relationship but it just feels unbelievable and I actually thought he’d turn out to be her long lost dad.

Mary the HR lady (Kate McKinnon) is a polarising character. I found her a massive cliche, from her multi-denominational winter seasonal sweater to her crazy party dancing when everyone starts to realise she’s ok really. It’s a waste of one of our best comedy actresses in a character who could have been so much more.

And really, Office Christmas Party could have been so much more. It’s fun, and Christmassy, but it offered more than it delivered – and I’m not talking about co-worker Jeremy’s comment during the party that “There’s a real Human Centipede situation in the men’s room”.