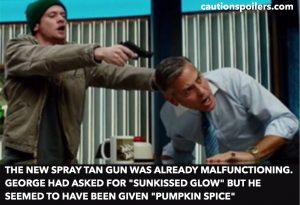 Confirmation bias after shelling out a hefty 14 quid to download the movie? Lust for George Clooney? Very possibly – but I actually really enjoyed Money Monster. It’s too long, but then what films aren’t nowadays apart from schlocky horrors where they have to keep the running time to under 90 minutes to pay for a couple of blood-covered animatronic monsters and for the leading lady to get her boobs out?

The Jodie Foster-directed Money Monster actually did well at the box office. But I know I’m in a minority here as the reviews were mixed at best, with lots of talk about Saint George having lost his touch with a string of flops. For the record, I found Hail Caesar rather flabby, and as for Solaris, don’t even get me started on that tinfoil lined misery-fest in a spaceship. So I can’t be considered a Clooney apologist by any means. But in Jodie Foster’s Money Monster, he’s excellent as Lee Gates, the amoral presenter of the eponymous financial TV show that encourages individuals to part with their hard-won cash with no comeback whatsoever if it all goes tits up, as it does here.

Gates is the brightly-hued presenter of the Money Monster TV show – where he sings and dances in glittery top hats or boxers’ dressing gowns to encourage small investors to buy shares in particular companies. One day – after a massive drop in value at IBIS Clear Capital has wiped $800 million off its balance sheet, not long after Gates has told his viewers that their money would be safer there than in a savings account – a young delivery man called Kyle Budwell (an impressively twitchy Jack O’Connell) walks into the studio during the show and holds Lee up at gunpoint, forcing him into one of two explosive vests.

Kyle demands that the show stay on air, so Patty Fenn, the already long-suffering producer of Lee’s show, sends the un-needed staff away and keeps the show on live TV while they try to work out Kyle’s motivations and what will help him back down without losing face.

Walt Camby (a slimy Dominic West) is the IBIS CEO but he is off in a private plane, in theory en route to Geneva, and is uncontactable. It soon becomes clear that the second explosive vest is for him. Camby has blamed the massive losses on a new algorithm but Diane Lester (a woman so impeccably elegant she makes Princess Kate look like Miley Cyrus), the chief communications officer of IBIS who has been left to hold the fort on TV in their CEO’s absence, starts to realise there is more to the situation than meets the eye.

Clooney is brilliant as Lee, who is completely irrepressible but also very winning. You can imagine meeting him and being pulled along in the reflective glare of white teeth, orange tan and general shiny exuberance. Even when he’s clearly terrified at bering shot dead live on air, or struggling to breathe and thinking he’s having a heart attack, pretty soon his natural bumptuousness is back to the fore. He just can’t help himself. He reminded me of one of those fairground games involving beavers that you have to bash on the head before they pop up again, as bold as ever.

He is completely self-obsessed but he is also genuinely witty, and engaging, naturally looking for common ground with Kyle even as his life is in danger. When Kyle’s pregnant girlfriend is found, Lee is genuinely congratulatory to Kyle while admitting he has a child who is “6, maybe 7… I just send a cheque”.

O’Connell is very good as Kyle, not letting Lee pass the buck and making him accept his part in the financial disaster. Poor Kyle suffers a huge setback when his pregnant girlfriend Molly pops up on screen to talk him down but instead basically tells him he’s a loser (all the while being beamed into bars and homes across the world). But soon he and Lee are tentatively starting to work together to confront Camby at his office, live on TV, as Camby’s duplicity and role in the $800 million loss is gradually revealed.

Julia Roberts is fabulous as his quietly spoken, frumpy producer and polar opposite, Patty Fenn. Patty is leaving her job to go and work across the road (I’m assuming to another TV company, not to a 7-11 or a nail bar).  She hasn’t told Lee, who admits he knows, and is clearly hurt by this even while worried about being blown up live on air. They get on so well and know each other inside out and I don’t mind admitting I wanted them to get married at the end or at least go out for dinner and a movie.

Jodie Foster’s Money Monster is not a perfect film by any means. It starts off with a figurative bang, and ends with a literal one, but in the middle it is a bit turgid.  O’Connell’s accent occasionally veers to his natural British inflections too.

Clooney’s character illustrates perfectly the gradual realisation that he isn’t as popular as he thought, and that his star is on the wane, whether being dumped from dinner by someone he needs to impress early in the film to the realisation that – when he asks investors watching to buy a few IBIS shares to raise the value of the company and so save his life as “value comes from demand” – he isn’t actually valued at more than a share price of a mere $8.37. To be fair this is expected given that his inspirational talk about how we are all people is completely at odds with his usual beliefs and was clearly made up as he went along.

Some parts of this film don’t ring true. No one seems surprised that the IBIS CEO is awol on board a flight, even though the only people I know who even try and go silent in top jobs are working mums who are trying to preserve their work/life balance but then find their careers completely stalled. But Clooney is really brilliant in this.

My only beef with Patty is her frumpiness (come on, it takes exactly the same amount of time to put on nice clothes in the morning as baggy old scruffs) but that’s down to Wardrobe not her (“make me look really shit in this film now I’m a Hollywood actress in my late 40s”, said no woman, ever). O’Connell is a sweaty mess of anxiety who needs Lee to keep his character calm and focussed. Camby is horrible – and I don’t mind admitting I wanted poor Kyle to blow him up. Kaboom.