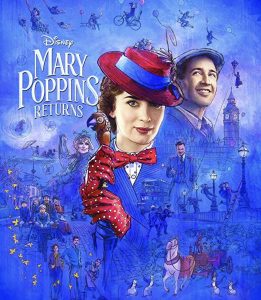 After IT last year I’ve avoided films involving colourful balloons and adorable small boys called Georgie, but this one rather took me by surprise.

Luckily Mary Poppins Returns is not a horror in any sense but a beautiful fantasy, especially when little Annabel Banks calls a plumber for their flooded kitchen and he’s able to come out straight away.

They still live in Michael and Jane’s childhood home, 17 Cherry Tree Lane, with their housekeeper Ellen (Julie Walters). Michael works at his father’s old bank as a lowly teller, so he can be with his children. Since their mother’s recent death, things are not going well – Michael can’t keep track of the family finances, the pipes are leaking and he’s leaning on his offspring, particularly his daughter, to keep things going.

A knock at the door proves to be two solicitors there to give him a few days’ notice to pay off a loan or lose the house, leading to a frantic hunt for a share certificate which will save the day (where it turns up is very obvious).

Sent out for forgotten groceries, the older children then lose Georgie in the park as he runs after an old kite of their father’s; when the kite reappears in the sky, it’s bearing Mary Poppins.

This is a film about childhood – children given the chance to be children again, giving them the strength to carry on; and adults realising they need to be adults, the memories of their own childhoods propelling them forward. Its driver is grief, as Michael struggles to cope with the death of his wife. (Another unseen wife dying before the first credits. Studios should be forced to employ an actress for these roles and pay her; it would help reduce the Hollywood pay gap at least.)

The jokes are mostly genial but ropy, though we chuckled as Georgie rushed into the cavernous hall with his dad’s battered old kite and a delighted cry of “we caught a nanny!” And Julie Walters in full “frustrated yet loving housekeeper” mode is adept at stretching a weak joke as far as it will go with her expressions and good-natured harrumphing.

The villain, too, isn’t particularly villainous (we find out he’s a bad ‘un during his first appearance), certainly no more than your average high street businessman. And Mr Frye (Kobna Holdbrook-Smith), one of the two pinstriped solicitors (pinstripes seem to be a calling card for venality in this film), turns out be thoughtful and understanding of the family’s plight. The park gardener with his “keep off the grass” sign is more committed to meanness than anyone else.

Once Mary (Emily Blunt) has arrived – reclaiming her old bedroom and every second Tuesday off, sorry, orf – she’s soon whipping them all into shape, her sternness hiding a joyful sense of fun. As soon as she, Jack the lamplighter (a wonderful and engaging Lin-Manuel Miranda), and the children are flung into the candy-coloured animated world, either under the sea, in a carriage or in a big top, all drabness falls away.

The animation is beautiful and harks back to the original in a way that everyone will still recognise, and the songs are pleasant and bouncy, with a couple of standouts.

The Place Where Lost Things Go is an ode to loss that reassures children it isn’t really the end; The Cover Is Not The Book (a duet between Blunt and Miranda) a warning not to be taken in. MPR is set during the 1930s slump, but these lessons, like the film’s central message, are eternal. (Those are the only tunes I can truly remember now, though the dance routines, such as the lamplighters whirling around their streetlights, are fixed more firmly in my memory.)

I didn’t come out and download the soundtrack like I did immediately after watching The Greatest Showman; that was a film with obvious flaws yet a near flawless soundtrack. My feeling is that this movie and its songs will bear repeated viewing, especially as a double bill with the original; though it probably won’t become a true classic.

It’s 2 hours 10 minutes and it feels overlong. It’s a lovely film though, especially as a Christmas watch, and Emily Blunt is a perfectly practical and practically perfect Mary Poppins in every way, as they try to save the house but more importantly each other (do you need a spoiler? I don’t think so). She looks ageless, as the incredibly posh are wont to do, yet talks like the Queen (who’s posh but not nearly as posh as many of her aristocrats).

Her Mary is very knowing but also possesses a childlike glee to some of the situations she puts the children in – falling through the bath, dancing with Jack in pink and purple outfits in their animated world, speaking in cockney rhyming slang. She’s a cross between your granny, your big sister and your best friend’s cooler, more helpful mum, who your dad probably fancied but was too scared to speak to.

Her expressions are funnier than the jokes; her look of horror when one of the Banks boys asks her weight before they all climb aboard Jack’s homemade bicycle seat, is practically perfection.

Whishaw does well with a frankly irritating character. Poor Michael has had a terrible time but he is rather weedy, ignoring his children when they tell him Very Important Stuff, and worst of all no longer believing in Mary Poppins’ magic. (Even I believe in Mary Poppins’ magic and I’m practically practical in every way.)

His sister Jane (Emily Mortimer, almost as practical as Mary P) is a no-nonsense single woman, resplendent in trousers and sensible pullover, working for SPRUCE, an organisation which tries to unionise the workers.

Mary is somewhat reticent with her magic when it suits her – my sons couldn’t understand why she didn’t help out at a crucial scene as time ticked on, and it wasn’t a situation where a character might need to learn they could do something for themselves. This is a woman who can fly, after all. Though she knows her magic can’t bring back the one thing the children presumably want, and that’s their mother.

There’s also a delightful musical turn from Angela Lansbury, who wasn’t in the original though we probably all think she was. And among many genuine nods to the original, the real crowdpleaser will probably be Dick Van Dyke’s cameo as Mr Dawes Jnr (Van Dyke is 93 and still dancing): it’s a few minutes of utterly exuberant joy.