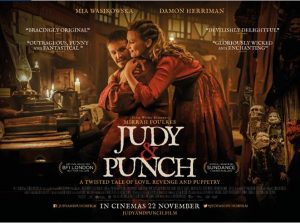 Brazen, bouncy and hugely entertaining, this is part fairytale and part Punch and Judy origins story – and like many fairytales it has become sanitised in its journey to what we know as a Punch and Judy show today.

Our modern Mr Punch, by now fading even as a children’s entertainment, is *only* a wife beater and a sausage eater with bright red cheeks – the original was, we discover, much worse, his crimes more final.

A play outside a play, Judy & Punch has the neatness, structure of acts and properly satisfying ending of the stage even as it expertly moves this theatre of the absurd into the open.

It also holds a mirror up to the world now, both our inability to cope with difference and our finger-pointing. How long before each of us becomes the equivalent of the 16th century witches targeted in the little town of Seaside?

And while it’s always depressing to be reminded that the more things change the more they stay the same, writer-director Mirrah Faulkes’s film is itself so different it’s always a compelling watch.

The film’s tone of cheery viciousness is pitched to exactly the level we get in Punch and Judy shows; which makes seeing the story play out with real people initially uncomfortable and always disconcerting (though I was laughing heartily throughout, and I love babies). 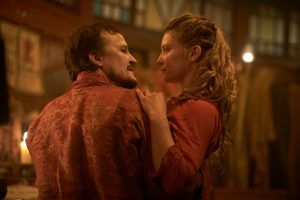 Damon Herriman as Punch and Mia Wasikowska as Judy

It’s a long time since I’ve watched a Punch and Judy show (I really don’t like puppets) but from what I can remember, the characters are all here: Punch, Judy, the policeman, the baby, the dog and the sausages. There’s even, momentarily, a crocodile.

Ah yes, the sausages. It’s always helpful if you can identify with a villain in a small way, to understand their remaining humanity; and though I hate puppets (like, really, really hate puppets) I really, really love sausages. In the end, it was well-worth putting up with the puppets for the sausages and much else besides, something with which the story’s sausage-stealing dog would no doubt agree.

The 16th century town of Seaside is nowhere near the sea. Hemmed in by a dark and frightening forest, the little town sits exposed on a hillside, perfectly situated for the hurricane of superstition which has swept through – its population eager to point the finger so everyone’s eyes are at least turned away from them.

Persecution in Seaside has been turned into entertainment: “happy stoning day!” the townspeople greet each other on the morning that three blameless local women are to be pounded to death. There are inevitably shades of Monty Python’s Life of Brian, aided by Mr Frankly (a hilarious Tom Budge). A bumptious self-appointed official who has only found importance by taking charge of the search for sorcery, his bouncing up and down brings to mind Michael Palin’s ex-leper. (Its references only get more audacious – with Professor Punch later taking well-known lines from a famous speech in a famous movie, also starring an Australian.)

Many of the people the town has turned on have fled into the forest, which hides the heretics camp. They’re mostly women, and all different: a herbalist, a child with Down syndrome, twins with albinism, people with disabilities, anyone with anything that has at some point set them apart.

It’s in the woods that Punch dumps his wife Judy (Mia Wasikowska), near death and covered in blood, after he beats her when she finds out what his negligence has done to their baby. She’s discovered by children and taken back to the camp, where she’s nursed back to health. 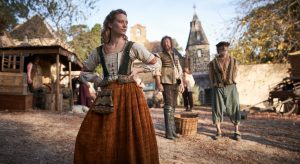 Punch (Damon Herriman) is a violent drunk who has wasted his talents, but not before teaching Judy how to make marionettes tell a story. Watching their theatre performance early on, manipulating the strings, we see them dance around one another just like the two puppets down below. Later she makes shadow puppets for their cheery little daughter, bunnies and foxes against the whitewashed wall.

Looking after the little family in a large stone manor house are two elderly servants, Scaramouche (Terry Norris) and Maude (Brenda Palmer). He is cheery and senile; she tries not to antagonise the awful Professor Punch, but the puppeteer’s anger moves up a notch each time their pet dog eats his sausages.

When his wife and daughter vanish, it’s easy enough for Punch to convince the town that they were killed by the two servants as an act of sorcery.

Herriman has played real-life killer Charles Manson twice, so he’s used to portraying a man who likes to have women in the palm of his hand, but whose magnetism is fragile. He’s excellent as the weak and brutally violent Punch, convinced he deserves the big time but wasting his talent and blaming everyone but himself. He waits and waits for talent scouts to come to their little town, now his drinking has left them so broke they can’t move elsewhere to perform.

And to reference another classic fable, Punch is the man who kills the goose that lays the golden eggs. The show needs two skilled puppeteers to go on; the servants cared for him. 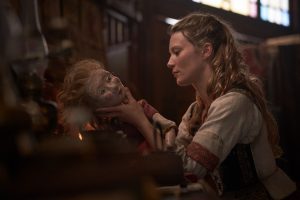 Herriman and Wasikowska play their roles completely straight as an off-kilter, increasingly bonkers world is revealed around them. Wasikowska has a particular talent for playing young women navigating an apparently normal world hiding seething horror beneath (Crimson Peak and Jane Eyre are well-worth checking out). The touching sweetness of her unconditional love for their baby, and her increasingly strained love for Punch, sets the scene for her primal maternal rage and her desire for calculated vengeance.

The score maximises the modernising, transplanted weirdness of the story: well-known tunes reworked into modern arrangements and instruments, or sometimes simply a repeated clanking thump of doom, warning us what might be to come.

The ending doesn’t quite work. While the story doesn’t flag, the determined emotion driving Judy dissipates, and Judy’s big speech, while it feels well-meaning (and accurate!), is clumsy. It fits a traditional, loose-ends-tied-up stage play, but not the screen.

That’s a small quibble though, of what is a highly satisfying 17th century revenge tragicomedy; the final macabre twist adding one last finishing touch to the classic Punch and Judy show.