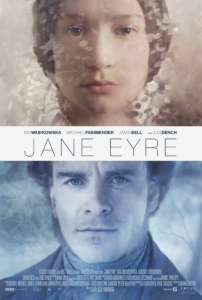 “I’ve never seen a city” Jane laments, worrying, as so many teenagers do, that life is passing her by: “I’ve never spoken with men and fear my whole life will pass”. Her most exciting trip is usually a damp trot to the postbox.

Jane (Mia Wasikowska), just turned 18 and working in a new position as a governess on the windswept Yorkshire moors, is a thoroughly modern heroine, partly because our feelings and reactions at different stages of life don’t change that much down the centuries.

There’s always a clamour for yet more remakes and adaptations of classic literature, and the paradox is then giving those same people something new and fresh which retains what makes the original so successful, whether that’s story or heart (or both).

Director Cary Fukunaga has done a terrific job with this version of Charlotte Bronte’s 19th century classic, making clearer the universality of the teenage Jane’s feelings (this a film for all ages but particularly for young women) while relating a well-established story.

There have been so many adaptations that sometimes one feels one has up-on-the-moors fatigue, though this is fresh rather than bracing, rather like Jane herself – despite most of it taking place in a draughty old house, full of secrets.

Actually the house, though filled with the dark furniture of the time, feels rather bright and fun when Mr Rochester (Michael Fassbender) isn’t at home. But when he returns he brings the weight of the world back with him as well as his own state of near-permanent exasperation with women and girls, creating an atmosphere fussy with unspoken stories and brooding irritation.

This is a film that starts near the end, as a rain-drenched Jane knocks on the door of a house on the moors, in distress, and is taken in by the Reverend St John Rivers (Jamie Bell, good as a man trying to be a patriarch to his sisters and not really succeeding) and his siblings Diana (Holliday Grainger) and Mary (Tamzin Merchant).

It’s essentially two giant flashbacks, to her schooldays and then to her time as a governess in Mr Rochester’s household at Thornfield Hall.

The young Jane (Amelia Clarkson) is extraordinarily self-possessed, retorting to the headmaster come to assess her for his school that to avoid the burning fires of hell she will simply “stay in good health and not die”.

Her aunt, Mrs Reed (Sally Hawkins, delightfully horrible, in her over-elaborate, old-fashioned dresses) sends her away, where Jane’s independent spirit soon brushes up against the institution’s rule-bound cruelties. “You have a passion for living, Jane” says her school friend Helen (Freya Parks).

Mia Wasikowska as the adult Jane excels at portraying that passion and zest for life, and a yearning for something more, running forward even if it looks as if she’s running away. There’s a subtlety to her exterior self that only partly cloaks her fiery spirit.

When she reaches 18 she leaves the school, and moves to Thornfield Hall to be governess to the young Adele, the French ward of Mr Edward Fairfax Rochester.

Fassbender is a perfect Rochester, highlighting what we know and love to hate about the character without turning the man into a Victorian caricature. He’s dismissively arrogant yet duty-bound, and the opposite of taciturn, coming complete with that annoying trait beloved of privileged men of assuming you can ask anyone else anything and fully deserve an answer; and then when you no long want to speak to them, they should leave. But though he’s arrogant he’s saved by a determination to do the right thing, even if while wearing a scowl.

Rochester’s rudeness has a humour to it though, as he tells Jane that “all governesses have a tale of woe”. She’s pretty brutal back. When he asks her if she thinks him handsome she replies no, then acknowledges that she should probably have said “beauty is of little consequence” (Jane is a mistress at damning with faint praise).

Housekeeper Mrs Fairfax (Judi Dench), motherly and bustling, is not the brightest, and is often bemused by the conversation rattling quietly back and forth with great vigour between her employer and the new governess.

The mystery of the story is the identity of the figure roaming the corridors at night, and it can no longer be hidden when the insane Mrs Rochester breaks out of her attic prison and sets fire to Edward’s room while he sleeps. It’s Jane who saves him, and he uses this forced intimacy and his new debt to her to both tell her the story of his first marriage and ask her to marry him.

This is a sprightly and engrossing adaptation, that charges along without endless dreary walks in the rain. Rochester is rude from the off but instantly intrigued by Jane as she constantly answers back and refuses to accept his rudeness more than she has to as an employee. What captivates him is that it is clearly the real her, rather than role-playing to get his attention.

The costume director was Michael O’Connor; he was Oscar-nominated for his work on the film. Jane is mostly in unfrivolous day dresses. As her employer starts inviting her into the drawing room when he has guests she keeps saying she doesn’t have anything to wear but he doesn’t buy her a dress. Rochester’s likely fiancée, Blanche Ingram (Imogen Poots), is beautifully attired in rich satin ruffles as she plays the piano for the assembled throng, and in pretty, fresh stripes during the day. The older Mrs Fairfax sports as many lace frills as her stout body can carry.

The piece de resistance is Jane’s wedding dress (sorry if that’s a spoiler but the book came out in 1847, and there are spoilers and there are spoilers). It’s a beautiful and very structured off-white lace concoction with a veil and a bonnet, though sadly she gets to wear it for even less time than most brides.

I loved how Jane Eyre is shot, particularly some of the overhead views as Jane is walking on the moors or fleeing. Straight, straight paths mown into the short, bristly grass, so many choices but each of them literally clear-cut. For women, so much of their lives, even if they managed to break out, were still set in a certain way.