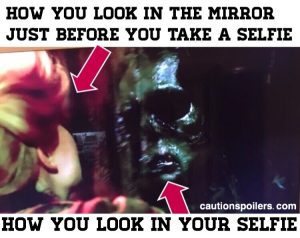 I’m a wuss when it comes to horror movies, but like the slasher film victim who just has to check out the scary noise in that basement while trying on bikinis when the power lines are down, I can’t stay away. I thought Crimson Peak wouldn’t be too bad to watch alone – it sounds like a 1970s concept album, how scary can it be! – well, very scary that’s how scary (after watching it I googled and even Stephen King thought it was scary).

Imagine Coppola’s Dracula crossed with The Shining and that’s pretty much Guillermo del Toro’s fabulously lush gothic horror film. Feast for the eyes is for once a term that perfectly applies – don’t even try to half-watch this film while getting on with the ironing as you’ll need all your senses in full working order and your wits about you to make the most of this terrifying story where it’s never clear if the living are more of a threat than the dead.

Edith (a wonderful Mia Wasikowska) is a young American would-be writer who lost her mother as a child. As befits a Victorian writer she is a huge fan of ghostly tales, in part after a visit from her dead mother. Now, 14 years later, she is being romanced by Tom Hiddleston’s creepy white-faced baronet and broke inventor Sir Thomas Sharpe (among all the brightly coloured gothic Victoriana, Hiddleston actually looks dead for the entire film).

Edith has no idea how safe and protected she has been in America, growing up the only child of her widowed father. He is a builder (the rich bewhiskered Victorian kind, not the bum-sticking-out-of-trousers, starts doing up the family kitchen but never finishes it kind) and naturally delves deeper into the realities of Thomas and his sister Lucille (Jessica Chastain) who are not all they seem. Sadly her father is horrifically murdered (a scene that is not for the faint hearted) before he can warn his daughter. Edith and Thomas marry before the three move to England and the siblings’ dilapidated mansion, Allerdale Hall, which sits on ground of red clay.

Too late, Edith realises the significance of her ghostly mother’s previous visits where she warned her daughter to beware of Crimson Peak (Ghost Mum might have been taken more seriously if she hadn’t looked so terrifying when imparting that information, and also if she’d actually called it Allerdale Hall)

The grand house is beset by more terrifying ghosts of past wives, and gradually the siblings’ hideous secrets are revealed – but not before we get some gratuitous Hiddleston bum shots (which almost made me forgive him that interview where he was asked about all the British actors who went to top British public school Eton and he reeled off a list of actors who had been to several schools that aren’t top British public school Eton). And in a nice reversal on the usual male gaze sex scenes, Edith seems to keep all her clothes on for their marriage consummation though to be fair with all those petticoats it’s probably easier to tunnel through them than try to get them off.

But Edith is becoming more and more unwell, and Lucille more and more threatening. As the new bride starts to investigate her husband and his sister, she finds out that she isn’t the first Lady Sharpe. The secrets don’t stop there as it turns out he’s not as rich as he makes out, though to be honest that’s probably par for the course for most English aristocrats, then and now.

Luckily Edith has a supporter in the form of her childhood friend Alan (Charlie Hunnam) who back in the USA is undertaking his own investigations and then appears at Edith’s new home with his findings.

There’s a ripeness to the film which is almost too much. Colours are bright but it is far from cheerful, with freaky ghosts, gothic turrets and wey-faced heroines. It is genuinely frightening, and the feeling of imprisoned powerlessness as the red clay seeps higher and poor Edith is beset by both the living and the dead is palpable.

Some of the twists and discoveries are rather obvious, though in some ways it’s a film to sit back and enjoy as its lushness washes thickly over you rather than to be taken aback at plot points. While the story proceeds on a well worn track towards its expected ending, the journey itself is one of overwhelming, viscous colour and the richly unctuous trappings of the best gothic horror.