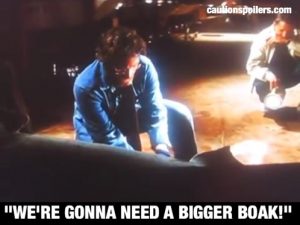 “They caught A shark not THE shark” says Matt Hooper, the wealthy, hippyish oceanographer who along with their new Chief of Police Martin Brody is acting as the conscience many of the residents of holiday destination Amity Island just don’t want.

Killing the wrong shark is a cliche now, along with underwater shots of legs kicking, a couple of false fin alarms, and a dodgy mayor in an even dodgier suit. But Jaws is, I am pleased to say, still terrifying. It is terrifying if you live in the UK like me when the worst you will encounter when venturing into our rather chilly seas are some jellyfish, a condom and an empty can of cider bobbing around, so I can only imagine what it’s like if you regularly holiday on Martha’s Vineyard, where Jaws was filmed (then again if you are lucky enough to regularly holiday on Martha’s Vineyard I’m not sure I’m going to feel sorry for you over anything, even being eaten by a shark).

But Poor Chrissie! First into the water, in the dark, and then first shark victim. This is why being an early adopter isn’t always a good idea. Her body washes up on the shore, covered in crabs and seaweed, but with the 4th of July celebrations coming up and a full weekend of festivities planned, Amity Island simply can’t afford to lose the tourist dollars it’ll bring. So Chrissie’s death is put down to a boating accident despite the misgivings of Brody, who is from off the island and also happens to be afraid of the sea.

Mayor Larry Vaughan is something of a cartoon villain in his brash clothes but it’s also obvious that Amity Island isn’t a particularly wealthy community and everyone needs the holidaymakers’ money. As he says to Brody, “You yell barracuda everybody says huh what? You yell shark we’ve got a panic on our hands on the Fourth of July.”

Unsurprisingly though when poor little Alex Kintner is killed on his inflatable, which then washes up on the beach, a torn, bloody mess, any sympathy from us for the mayor evaporates as he desperately tries to lose the bad news. “It’s a small story I’m going to bury it as deep as I can” says the local newsman as the grief-stricken Mrs Kintner, the mother of the dead boy, starts placing adverts offering a bounty for the death of the shark.

Many of the locals see Chief Brody and the newly-arrived Matt from the mainland Oceanographic Institute as meddling incomers. Matt and his science just don’t really fit in here: “indicates the non-frenzied feeding of a large squallus” he says of Chrissie’s body when we all know she was eaten by a shark. When men from all over start responding to Mrs Kinter’s advert and kill and bring to shore a Tiger Shark, no one wants to hear Matt explain that it’s the wrong shark because, hey, jaw measurements.

The weather is beautiful and the beaches and surf are crowded when a black fin is spotted in the shallow waters. Panic ensues as everyone rushes for the shore but it’s just kids crying wolf with a fake shark fin, an action which though unbelievably stupid has left me with a sneaking admiration for their sheer ingenuity.

After another death the mayor finally agrees to grizzled fisherman Quint’s offer to seek out and kill the shark for $10,000, and Quint, Hooper and Brody start preparing.

There’s constant friction between hoary old seadog Quint who is like sandpaper to the wealthy oceanographer Matt’s smooth edges: “You got city hands, Mr Hooper” says Quint as they prepare to go out in Quint’s boat The Orca to find and tackle the Great White once and for all.

It’s strange the little things from a movie that stick with you, and also the things that you forget, even after several watches.

I remembered Brody’s youngest son playing alone on the beach all those times, singing his muffin man song, as chaos reigned around him. I remembered poor Chrissie, the first victim, though not her drawn-out death scene.

For some reason I had forgotten all about those nighttime hours on The Orca after their first run in with the Great White. Of Quint telling the story of the USS Indianapolis to a silent boat, a few minutes after jokily swapping injury stories caused by sharks and moray eels and arm-wrestling matches and heart-breaking women.

How the ship had delivered the Hiroshima bomb and was then bombed itself. How it sank in just a few minutes, and then the sharks arrived. “so 1100 men went into the water, 316 men came out. The sharks took the rest. June the 29th 1945. Anyway we delivered the bomb.”

I had also forgotten Quint talking about the high-pitched screams in the sea from his wartime crewmates as they were attacked and eaten by circling sharks over those many, many hours that they were in the water, and also how this was later replicated with his own high-pitched screams, his legs in the shark’s mouth, his arms flailing madly for help on the sinking deck of the Orca.

I’d never realised how the huge dead-weight shark, once killed, nosedived to the bottom of the ocean, blood pouring from its wound like smoke billowing from a ship as it sinks to the sea floor.

And although initially we don’t see much of the shark (music, a sense of menace and that fin is enough for a long time) I was surprised how gruesome some of the injuries and deaths are – severed limbs drifting in the water, heads already rotting. Contrastingly, the scenes on the calm sea during the night are incredibly beautiful, coloured with smoky greys and blues as the boat’s lantern shines through the semi-darkness.

The acting is first rate, particularly the shocked responses from Matt, an expert on the oceans who understands shark attacks but also can barely stop himself retching – whether cutting open the wrong shark’s stomach, or looking at Chrissie’s torn body, or finding the fisherman’s head under his boat. Lorraine Gary as Ellen Brody is sadly underused though.

That a film over 40 years old still scares and resonates so much today is testament to the universal themes (we are visitors – often aggressive ones – on the ocean) and also the skilled moviemaking from Speilberg. Strangely the only aspects that really jar are those real-life signs that Jaws was a 1970s film. The smoking everywhere, including a hospital, is so dated (isn’t the only thing that dates scifi movies that smoking is allowed in spaceships?)

It’s also astonishing how much freedom the children have too, on the beach and near or actually in the sea (the Brodys’ youngest child looks about three) – way more than I would allow, but then I’ve seen Jaws and the parents in this film haven’t.