You are here: Home / Film Reviews / It Came From The Desert 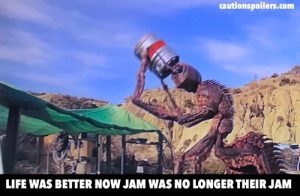 As B movies go this is a corker: knowing but not overwhelmingly meta, witty, with schlocky horror tropes tripping over each other.

Aliens! Giant bugs! Meteorites! Something dodgy going on back in the 1950s! The only things missing are a few canisters of toxic waste and a Kevin Bacon cameo. Chuck those in and my famed five stars would’ve been theirs for the taking.

And of course don’t forget the gloomy scientist, who if he wasn’t mad before, probably is now; after deciding it was a good idea to indulge in a little gene splicing, so the giant bugs can’t breed without the application of alcohol – yes, jam is no longer their jam.

As if the craziness and meta humour wasn’t enough, It Came From The Desert also features drunken teens regailing each other with the Latin phrase “fortune favours the brave!” which we all know (don’t we?) is the wording on John Wick‘s back tattoo.

Though it slightly outstays its welcome, and we’re never really in doubt about what will happen, overall it’s a breakneck romp that will remind a lot of people why they love a good, no-nonsense B movie.

Brian (Harry Lister Smith) and his best friend Lukas (Alex Mills) are teenage motocrossers; as well as being obsessed with campy film character The Eradicator, star of a long running franchise of truly terrible bug-killing films.

Lukas has had a big motocross win, so to celebrate he, Brian and their friends are heading into the New Mexico desert for a party. Invited along is the clever and beautiful Lisa (Vanessa Grasse, Leatherface) – Brian’s secret crush. Like many teens they’re happy in their own little world and ignore the missing person posters starting to pop up around the town.

The desert party looks great fun, and I particularly liked one man’s homemade alcohol dispenser: two canisters strapped to his back with a tube going to his mouth, not unlike John Goodman in Arachnaphobia. There’s even an old caravan called the Love Wagon, tipping almost permanently back and forth.

One of the most enjoyable ways to watch films like this is dead-man-walking spotting: who has committed a horror movie sin and will soon be ant food?

Well, I saw Lukas littering not once but twice, sullying the stunning desert vistas with his empty beer cans. After that horror, I’ll admit that as a bosom-hoiking middle-aged woman, if the ants didn’t get him I was fully prepared to finish him off myself.

Wandering away from the party Lukas and Brian find a mysterious facility, rather lacking in security features.

Once inside there’s a crawl tunnel ominously marked “Batch 9” which of course they explore. Well, who wouldn’t? I wouldn’t, that’s who. Which is how I’ve got to my age suffering nothing more serious than the odd midge bite.

What they find is a room that looks like Miss Haversham has been doing her laundry; strung with a white cobweb-like substance dotted with the gritty remains of past meals, some of it looking weirdly like knickers hanging on a washing line.

The room is clearly a home for something so terrifyingly grubby and disgusting it wouldn’t have surprised me if my 6 year old had emerged from the cotton wool, picking his nose.

The ants themselves are massive, scuttling, gurgling, and – rather fabulously – chatting via subtitles; and the two boys are flummoxed on how to fight back.

Lukas grabs a frying pan, earning a withering rebuke from Brian: “what you gonna do with that, make it breakfast?” which actually might be a good idea, rather than being breakfast. But it’s out of the real frying pan and into a metaphorical fire as they’re attacked.

Were you wondering where the beleaguered scientist with all the answers is yet? He’s here, at least on a video they find, helpfully explaining what he and his colleagues have been up to since the 1950s, but don’t feel too bad for him as he doesn’t even apologise.

The special effects are variable though mostly fine; and there are plenty of giant ants scuttling down the red and yellow sandstone hills once they realise there’s a party going on. Crash-landing on this bug spray-filled planet 60 years ago starts looking like a better idea than they first thought.

But mostly it’s not a B movie where you’ll get distracted by holes, either in the plot or the scenery; unless you’re a total misery guts unable to see the joy in someone being pierced through the chest by a giant bug’s arm while everyone else runs around screaming attractively.

With the ant army after a good time, soon the party is overwhelmed by the invaders. Several of them end up back in Miss Havisham’s laundry room, wrapped up in the webbing like mummies, though the ant queen is not happy when our heroes try to free their friends; not unlike me when someone attempts to steal the delicious-looking lunch I’ve left in the office fridge.

There are actually some quite effective shots: particularly in the desert, Lukas’s small truck dwarfed by rocky peaks round about; and as two Mexican men in the opening scenes venture into a mining tunnel in search of copper, their forms silhouetted against the blue night sky behind them.

On occasion the acting isn’t good enough for the meta humour; you need to be good at something to mock it; but mostly it works fine. The pace is fast, the characters sweetly appealing (even the dumb ones), the effects mostly work and the use of common horror staples is fun and reflective, rather than lazy.

Tonally the film moves around; sometimes it’s played mostly straight, sometimes it’s over the top, and the move from one style to another isn’t always smooth.

But overall this is a probably the only way to spend an hour and a half with creepy crawlies that’s actually enjoyable, and doesn’t involve scratching.

Ultimately, It Came From The Desert (it’s based on the video game of the same name) bubbles with a joyousness that’s more infectious than a zombie-causing virus, a cable TV show pandemic, or even HG Wells’ alien-destroying common cold.

Buy / rent on vod or buy the dvd from amazon.com