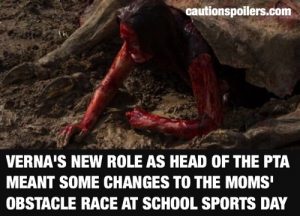 As a mother I’ve got to agree with one of the life (death?) lessons in Leatherface – never diss someone’s mom.

This is a prequel to the 1974 film The Texas Chainsaw Massacre, and it has some good moments, though it never reaches the heights of that classic. The central metaphor of the teen shedding a figurative skin and gaining a literal one is quite well-handled, though.

As if to mimic Jed’s downward spiral into Leatherface, after the initial scenes with a young, unwilling Jed, which suggest much but show little, the final few minutes of the movie are very graphic. His transformation from kindhearted hillbilly to remorseless killer, enjoying every drawn-out, blood-soaked, torturous moment, is certainly complete by the end.

The film opens with a family birthday tea for little Jed, a sweet boy who has had the misfortune to be born into a family that isn’t like other families. For a start Jed has been given a chainsaw for his birthday. And he’s expected to use it on a supposed pig thief currently tied up at their dining table.

In the face of mounting excitement among family members as Jed tries to wield it, the youngster fails at this task, leading crazed mom Verna (Lili Taylor, having a blast in the only really “fun” role in the movie) to give him a warm-hearted pep talk about family: “you let us down, Jed. It’s ok, family always here for you, remember that?”

Despite or because of Jed’s clearly un-murderous tendencies his brothers and grandpa continue to try to train empathy and caring out of him, and soon there’s a dead girl who just wanted to help him lying in a pit in their barn.

But this time they’ve gone too far – the girl’s father Hal Hartman (Stephen Dorff) is a Texas Ranger and soon he’s had Jed put into care. It’s not justice though, so the lawman spends the next decade brooding and looking for revenge.

10 years on and Jed is still at the Goram House Youth Reformatory, though his name has been changed and we don’t know, at this point, who Jed is. (By which I mean he doesn’t wear a T-shirt with Jed on it. It’s pretty easy to work out though, which is a shame.)

Newly employed at the hospital is Lizzie, a sweet and extremely unguarded nurse who just wants to help. In fact she’s so naive she would never be let anywhere near an institution for potential killer teens, were it not for the fact she is in a horror film.

Lizzie takes to Jackson (Sam Strike), a kind boy who looks as if he could make it outside; and Jud (Sam Coleman), an overweight, shambling figure who tries to help the young nurse when she is attacked by the violent and empathy-free Ike (James Bloor). By contrast Clarice (Jessica Madsen) is vicious but looks, in her summer dress and long blonde waves, like your typical final girl, until she reveals her terribly scarred body later on and it becomes clear she is as traumatised as she is un-saveable.

Meanwhile mom Verna has married into money, hired a top lawyer and is determined to get visitation rights for Jed, who she hasn’t seen in a decade. She does’t manage it, yet, though her attempt does result in a murderous riot. (The film is pretty dark for much of the time, which during the riot works particularly well – the situation looks genuinely chaotic and terrifying for prisoners and staff alike.)

Most of the young people are, admirably, portrayed as potentially redeemable, though the movie doesn’t shy away from their (very) dark sides. Jed looks disarmingly like a gentle giant and helps Lizzie at the hospital, but seems to take refuge in murder, finding it almost a comfort to snuggle up to a corpse. Ike boasts about his family before admitting “they keep fucking moving!”. Jackson just wants a nice life with a nice girl, commenting wistfully to Lizzie at a diner just before the group causes a bloodbath: “i wish this was just normal… and I wish I was somebody else”. Clarice is pretty dreadful but her scars reveal the depths of trauma she has been subjected to.

There are some clever touches. Hiding in the carcass of a dead and rotting steer, someone peers through a hole in the hide. Emerging covered in blood, the slightly reduced-in-number teens look like they are the innocent survivors of a slasher horror. As Lizzie heads to a stream to clean up, bloodied men staggering behind her, again it looks like any other exhausted final chase scene. (Though I may have been a little too keen to see links that aren’t there – early on I misread Gorman House Youth Reformatory and thought the writers had named it after the exploitation director Roger Corman.)

The Texas Chain Saw Massacre is certainly referenced though – in that first birthday meal scene, Jed is unable to kill the victim which makes the man’s ordeal even worse, just as in the classic first film when Leatherface’s desiccated grandpa fails to finish off Sally when he keeps dropping the hammer.

This movie is not, unlike its protagonist at the end, irredeemably bad by any means. It has some clever moments and some good performances, particularly from Lili Taylor and Vanessa Grasse. And Jessica Madsen manages to make the underwritten Clarice’s actions if not redeemable, at least understandable.

But prequels have to be pretty special to rise above their natural built-in issues, namely that we know where we need to end up. It’s hard to introduce tension, and though directors Alexandre Bustillo and Julien Maury try that here by teasing us over which character is Jed, it’s easy enough to work out.

The only question left is whether Lizzie survives, and I’m not going to tell you that. So until you see the film or (and I know you will) google, the poor girl will have to remain a horror version of Schrodinger’s cat, both dead and alive at the same time.

Still, as a feminist I can’t complain about smashing gender norms with men taking up sewing.