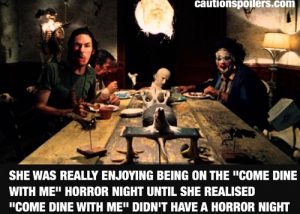 The most fascinating person in The Texas Chainsaw Massacre is Franklin, a disabled man confined to a wheelchair. Horror films often put all their character-building into the final girl, and ignore the rest as mere fodder. But here Franklin (Paul A Partain) held my attention more, ironically because his vulnerabilities force him to mimic the ways that women often have to act – sometimes unconsciously – to try to keep themselves safe.

He’s not particularly resourceful, but then neither is this film’s final girl. He is though in a constant state of high alert, dissecting previous interactions and blaming himself when trying to work out what could have caused a clearly crazy hitchhiker to flip: “do you think I said something made him mad?” he later asks, when worrying whether he might come after them.

Franklin’s disability makes him an outsider. He’s often left alone when the others rush off to places inaccessible to him. He suffers many indignities because of his wheelchair use – peeing into an empty can at the side of the road is just one – but seems to be more attuned to potential evil and more aware of surroundings and situations because of his extreme vulnerability.

It’s taken me four attempts over the years to watch this all the way through but I’m glad (and relieved) I finally did. Texas Chain Saw Massacre really is a masterclass in slowly ratcheting up tension and implying torture while showing remarkably little. It also uses horror tropes that nowadays are often there only for comic effect or meta box-ticking, but which in director Tobe Hooper’s early 1970s hands lead us down a staircase into pure horror (just check out that seemingly innocuous warning from a local).

Graves have been disturbed in a Texan cemetery and the half-rotted, gelatinous bodies posed in ghastly positions in the blistering Texan sunlight. Sally Hardesty (Marilyn Burns), her boyfriend Jerry, her brother Franklin, friend Pam and Pam’s boyfriend Kirk, are travelling in their van to check that the grave of the Hardestys’ grandfather has not been disturbed. Then it’s onwards to explore the old family house which has now fallen into disrepair.

En route to the property, they pass the slaughterhouse and discuss new and old methods of slaughter. New Age, astrology-loving Pam is horrified that this killing is still happening even in a supposedly humane way. Soon after, they pick up a hitchhiker, much against Pam’s better judgement: “he’s weird looking” she says, and she’s right. The hitchhiker works at the slaughterhouse and misses the old ways: “You see, that was better, they died better that way… new way put people out of jobs”. But he gets hold of Franklin’s knife and as his behaviour becomes uncontrollable he’s ejected from the van by the side of the road.

It’s hot – even hotter than Texas usually is in the summer and there is no respite, not even in an old swim hole near the Hardesty house, where Kirk and Pam run off to after the van has finally pulled up outside and everyone but Franklin has explored the decaying upper rooms. They find the pond dried up and long-disappeared, which made me wonder if it was a joke played on us by Hooper. We fully expect attractive couples in horror films to strip naked at some point, often under the pretext of a swim, but here they – and us – are thwarted.

The Hardesty family house is interesting – there are omens of impending doom but these are mostly picked up by Franklin, who is already in a state of heightened unease after their run in with the hitchhiker. Despite its disrepair, in itself it is a bright and cheery place, as Sally tells their friends about staying there as a child. It’s the neighbouring house of horrors that actually looks reasonably well-maintained from the outside, with its veranda and field of sunflowers.

But gradually they all end up there, with its bone furniture and its meathooks, its desiccated attic-bound grandparents and terrifying butcher. Kirk and Pam first, searching for gasoline for the van, which is almost out. There is murder and torture but it is (mostly) unseen.

The last 30 minutes are heart-thuddingly good. Sally’s terror as she tries to flee through a copse of thorny trees, long blonde hair catching on tangled branches while Leatherface (Gunnar Hansen) approaches with his roaring chain saw, is almost tangible. Once she’s in the house the sounds are of screaming (hers – almost constantly), and laughter (Leatherface and his family) as they torment her at the dinner table.

The two groups (the Hardistys and their friends, Leatherface and his family) are structured very differently. The youngsters are briefly but clearly drawn. Apart from Franklin they come across as privileged, but they treat each other as equals. Sally isn’t resourceful, unless you consider her foghorn screaming anything other than simply a terrified reaction. And she is very much a reactor. Leatherface’s family operate as a typically male unit with precedence by age. Grandaddy is still deferred to. One brother has created a kind of moral hierarchy within the family, as how else could anyone cope with the cognitive dissonance their behaviour entails?

Leatherface is such a horror icon now he’s almost an anti-hero, licking his lips from within his hideous homemade mask. And there’s a definite look across his whole family: lank hair, twisted smiles and hideous teeth. In retrospect the teeth alone should have alerted us to the fraternal links, though that’s probably easier for an American viewer, with their love of perfect pearly whites, than a Brit, with our history of heroes and heroines with hearts of gold but mouths full of yellowing, stinking stumps.

The cinematography is blinding and surprisingly colourful. Blazing sunsets, black figures against orange skies, a red chainsaw nestling in a field of yellow sunflowers with bright blue skies overhead. Sally’s eyes reflect the bright green t-shirt of one of her tormentors. Her white jeans are sparkling in their brightness, remaining remarkably clean throughout, though I have to confess by the end her face and hair were so drenched in the red stuff I forgot to check if her trousers had escaped the haemoglobin onslaught.

I like that some of the loose ends aren’t entirely tied up. What did happen to that truck driver at the end? Or Pam, last seen half-alive in a freezer? There’s an ambiguity there, while still giving us the finality of a proper ending.