You are here: Home / Film Reviews / Fantastic Beasts And Where To Find Them 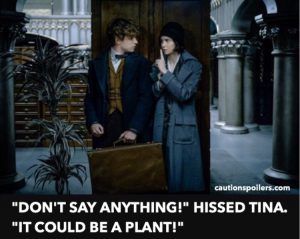 Hunt for the Niffler – if that’s not already the name of a Great American Rock Band it certainly should be. And if you ever meet a niffler you will fall in love with it, even as the little critter is stealing the gold necklace your granny left you.

And that title. So much more evocative than the usual boring stuff about lemon drizzle cake clogging up Book Clubs up and down the land. Of course Fantastic Beasts and Where To Find Them is actually a book – a textbook used by Harry at Hogwarts, and written by one Newt Scamander, an Old Boy of the school.

This fantasy film – written by JK Rowling – is about Newt himself, and what happens when he hits New York in 1926 with a suitcase full of unruly and unusual animals. He’s there en route to Arizona, to release one of his magical beasts. He has yet to write his seminal textbook but he’s been all over the world researching it.

In New York Newt stops to watch no-maj (the American name for a Muggle) Mary Lou Barebone speak on some bank steps about the dangers of witches and wizards, and while he’s watching, one of his animals escapes from his suitcase. It’s a Niffler, like a duckbilled platypus but with a magpie’s love of glitter, gold coins and jewellery. As Newt chases it into and around the bank, he meets canning factory worker Jacob Kowalski, who is there hoping to get funding to open a bakery.

Turned down for his funding Jacob walks off, but is immediately co-opted into Newt’s hunt for the Niffler.

New York wizarding isn’t set up quite like in the UK. The primary concern of MACUSA – the Magical Congress of the United States of America – is to maintain the gulf between no-majs and wizards. They do this by wiping memories of any no-maj who comes into contact with wizards, and by coming down hard on wizards who breach this or any other MACUSA rule. Tina – a recently demoted Auror – finds Newt outside the bank just as he is trying to wipe Jacob’s memories of the magic he’s witnessed. She accuses Newt of being an unregistered wizard, and takes him to MACUSA in the hope that by doing so she will win her old job back.

As Jacob walks off he accidentally picks up Newt’s suitcase, identical to his, leaving his own which is full of potential stock for his proposed bakery. (If Shakespeare had written plays about luggage I think the “mistaking one identical suitcase for another” plot device would be utilised a lot.)

Of course when Newt is told to open “his” case at MACUSA all they find are some pastries whose only similarity to the fantastic beasts in Newt’s missing case is their tendency to flakiness.

Back at Tina’s apartment the two men meet her glamorous sister Queenie. Beautiful and kindhearted, she can not only read minds but also magic up strudel for dinner from nothing (so basically like most mums then).

Meanwhile Auror Percival Graves (Colin Farrell) is using fair means and foul in his desperation to find an Obscurus, a strange, uncontrollable and dangerous force caused by child wizards trying to suppress their natural wizarding abilities and instincts, so he can use the powers for his own ends. His best bet is tracking young wizard boy Credence, adopted along with his magical siblings by the abusive Mary Lou. And as Newt’s escaped fantastic beasts create mayhem and disorder all over the city’s finest department stores, the Obscurus has the potential to cause massive destruction.

Newt – with his diffident manner, floppy fringe and long scarf – is like a regenerated Doctor Who, with a suitcase for a TARDIS instead of a police box. Within the suitcase is a whole other world populated with incredible magical creatures, a haven for them and for Newt.

Redmayne is lovely in the role, one he seems to have been born to play. Colin Farrell is terrific, and as he ages as an actor he’s looking far more statesmanlike. But Depp as dark wizard Grindwald – with his partly shaved head, bleached hair and moustache – simply doesn’t work. He looks like an ageing popstar whose heyday was the 1980s but is still, 30 years and the addition of same number of lbs later, churning out the same old hits.

Watching the deliciously fashionable silk-clad bombshell Queenie slinking her way around New York, and using her feminine wiles to help Newt and Jacob, is a joy – while serious, plainly dressed Tina gradually warms to the shy yet strangely confident Scamander.

I love films that create whole different worlds taking place within feet of us, whether in realistic gangter flicks like John Wick (there’s a fabulous wizarding speakeasy that did actually remind me of the hidden nightclub beneath the Continental) or magical fantasies like Fantastic Beasts.

This hidden landscape is beautifully created, and the attention to detail – from the CGI to the creatures’ mapped-out abilities and oddities (one expands to fit available space, another can see just a few seconds into the future) – is breathtaking.

And it’s probably 15 minutes too long (why oh why are most films 15 minutes too long? We need a movie director’s equivalent of Coco Chanel’s fashion dictum to always remove an accessory before leaving the house. Film people, when your movie is completely, totally, finished, go back and cut out 15 minutes. You can do it!)

There is a big cast of characters but some get little screen time and you’re left wanting more. I’d have liked to have seen more of Samantha Moreton who puts in a terrifying performance as Credence’s abusive adoptive mother, and Carmen Ejogo who has little to work with as the supposedly important president of MACUSA.

While Credence and his scary sisters, who look like a family from a low budget horror film about puritans and strange children, could easily have had a film all to themselves.