It’s arrived on a wave of terrible reviews that seemed to leave the film destined for a Cats / Dolittle hold my beer meme, and after watching it with my 10 year old, I can say that it’s… fine. And quite fun. And reasonably entertaining.

It’s not without problems. The pacing in the middle is way off, which doesn’t help when the story itself is so basic (Dr Dolittle and his animal chums’ search for an undiscovered island is remarkably straightforward considering its mythical status).

The lack of real adventure in a film that apparently cost $175 million, even if a big chunk of that would have gone on CGI talking animals and a huge and starry cast, is a hefty minus. By the time it makes its money back animals will be able to talk anyway, and probably won’t charge much, meaning the inevitable reboot will be made by a badger on a smartphone for about £200. 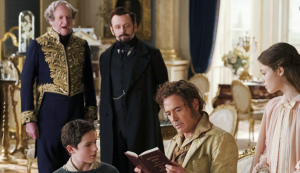 Still, in its present state this is a movie that would work well as a Saturday morning kids’ treat, unless you’re Welsh, as having to listen to your country’s beautiful accent mutilated by Robert Downey Jnr will probably negate even the film’s small pleasures.

Dr Dolittle has shut himself away at his country estate, a haven for animals, after his wife Lily – travelling without him because he is staying at home to care for the animals – drowns on one of her adventures. Yes, the film claims they’re a feminist couple while also utilising the “pre-dead wife” trope.

The arrival of young Tommy Stubbins (Harry Collett), with an injured squirrel called Kevin, coincides with a visit from the young and posh Lady Rose (Carmel Laniardo, surely destined to play Estella in Great Expectations at some point) who has been sent by a gravely ill Queen Victoria to summon Dr John Dolittle. 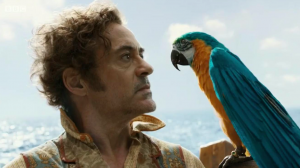 Robert Downey Jnr as Dolittle and Emma Thompson as Poly

Dr Dolittle, after a quick wash and scrub-up, after which he looks worryingly like serial killer Fred West, heads to Buckingham Palace with his menagerie, where he determines that Victoria has been poisoned.

The only antidote is the eden fruit, a never-before-seen fruit from a never-before-seen island. He heads off with Stubbins and his animals on his wooden sailing boat to steal Lily’s journal back from the king of Monteverde, hoping it will lead him to the mysterious island.

But Müdfly, the Queen’s physician, is in lukewarm pursuit, sent by an evil courtier to ensure Dolittle never completes his task.

The stay over in Monteverde is quite fun, though not really awe-inspiring enough for an adventure film. There’s history between King Rassouli (played by Antonio Banderas!) and John to be resolved, though it’s all rather lacklustre. 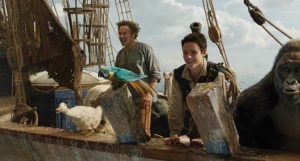 While the adventure is unexciting, the locations and sailing boat look good and the banter between the animals is often perky.

Most of the animals have parent issues, with the more confident ones having watched a lot of movies. An ant berates James the bluebottle for “turning up here on the day of my daughter’s wedding” and Kevin the squirrel regularly pauses to narrate his own captain’s log of events. It’s derivative but it’s also witty.

Dolittle’s core audience – younger children – should enjoy it. Hell, I enjoyed it. It’s not weird enough to have a lucrative second life as a midnight cult classic for drunk students, but some of its tonal changes, particularly during a fight to the death between Barry the tiger and Chee-Chee the gorilla, one with mummy issues and the other scared of everything, are bizarrely enjoyable.

The voice performances are good and Harry Collett as Stubbins, the young teen who invites himself along as Dolittle’s assistant, makes a decent second mate (after Poly the parrot). 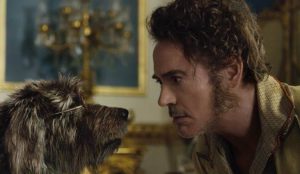 The animals are voiced by a succession of big stars. If it wasn’t for Cats last December I’d say we hadn’t had so many top flight performers attached to one flop since Movie 43.

Emma Thompson is Poly the parrot, RALPH FIENNES Is Barry the tiger, Rami Malek is Chee-Chee the gorilla, John Cena Is Yoshi the polar bear (his partnership with Kumail Nanjiani’s Plimpton the ostrich is a hoot) – plus we get Tom Holland, Selena Gomez, Octavia Spencer, Marion Cotillard and Jason Mantzoukas.

Downey Jnr throws himself into his role with an enjoyable recklessness, and Michael Sheen even gets to play Blair again, though this time it’s not Tony but Dr Blair Müdfly, who has loathed Dr Dolittle since medical school. (Actually it pretty much is Tony again, with Dolittle as Gordon Brown.)

The messages (all kids’ films now have to have more than one message) are that everyone is important no matter how small and insignificant they seem, and that there is a family of likeminded people for you somewhere. Except people who liked this movie. I realise I’m probably on my own for this one.

The denouement is eye-popping, involving a constipated dragon (Frances De La Tour) and some bagpipes. (My 10 year old thought it was merely funny – I thought it was hilarious.)

Jessie Buckley, who is currently appearing in almost every film of note while failing to win any of the awards she’s deservedly nominated for, has the easiest number of all, playing the nearly-dead Queen Victoria for most of the film while lying in what looks like an extremely comfy bed.

Maybe the Academy will right this season’s awards wrongs next year and give her an Oscar for this. Well, Judy Dench got one for only eight minutes as Elizabeth I in Shakespeare In Love.

Note: There is a short mid-credits scene