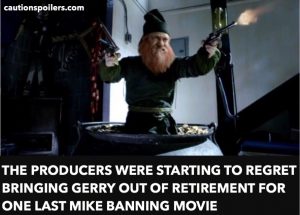 A collection of 15 shortish sketches, the US version released in cinemas has a producer pitching the film to link everything together; but the UK version that I bought from Amazon is linked by the story of three teenage spot-covered slacker boys who are looking for the mythical Movie 43 online.

Yes… I did say bought. I could’ve rented it but instead I bought it, and now every time I log into Amazon Prime it’s going to be there, a terrible reminder of a love of film gone horribly, tragically wrong. Like dodgy drunken photos from your Ibiza holiday following you round the Internet and popping up every time you try to get a job as a Police Commissioner, or Archbishop of Canterbury, so my film-related CV/Resume will always be haunted by this one, small, misstep.

Anyway I think the stars of Movie 43 need to share my pain so here goes: Hugh Jackman, Kate Winslet, Gerard Butler, Richard Gere, Kate Bosworth, Halle Berry, Stephen Merchant, Liev Schreiber, Naomi Watts, and many others. (I’ve not named some of the younger stars like Chloe Grace Moretz and Christopher Mintz-Plasse as they were young and silly.)

The main problem with Movie 43 is that the sketches vary massively in how funny they are, and almost all of them are too long. Even the funny(ish) sketches should have been cut off earlier.

I’m not going to go through every sketch as luckily for me I can’t even remember them all. But here, in no particular order, are some far-too-carefully considered thoughts:

The Catch – Kate Winslet is Beth, a single businesswoman going on a blind date with Davis, played by Hugh Jackman. Davis is gorgeous, sexy, successful and best of all SINGLE! Unfortunately Beth discovers the reason why when they get to the restaurant and Davis unwraps his cashmere scarf, revealing dangling from his neck a pair of testicles. (You can just imagine the elevator pitch for this one can’t you). It is actually one of the funnier sketches in a horrific kind of way (I was sort of watching through my fingers and not for the reason I watched the rest of the film through my fingers). Both Jackman and Winslet play it straight and are really great actors (the gag is that Beth can’t help but notice the testicles dangling, but friends, waiting staff and the maitre d’ don’t seem to even see them). Frankly it doesn’t ring true though. A 30-something woman wanting to settle down would be unlikely – after a decade-long search involving online dating, all her friends’ single mates and finally some randoms from a LinkedIn marketing group – to turn down a good looking, rich, clever, personable man who looked like Hugh Jackman just because of some dangly neck bollocks.

Veronica – Veronica and Neil used to be in love. Now they’ve broken up but Veronica bumps into Neil at a grocery store where he’s working. At the checkout they flirt and argue, without realising the whole conversation is being broadcast throughout the shop over the intercom. It’s actually pretty funny. Emma Stone and Kieran Culkin are good (particularly Stone), and there are some decent lines in it – “How’s your HPV?” “It’s not my HPV, I’m just carrying it for you”. It’s too long though and should have ended when she flounced off shouting “see you in church!”

Happy Birthday – So it’s Brian’s birthday and his flatmate Pete buys him a leprechaun as a present. A short, sweaty, grubby Irish leprechaun played by Gerard Butler. The leprechaun gets his brother – another stinky, hairy, sweaty leprechaun – to save him. Usually I’d think two Gerrys this was all my Christmas wishes combined, but not this time. Still, it’s always nice to know how hot Hollywood stars would look if they didn’t have that sheen of fame and glamour and actually worked in your local betting shop.

iBabe – a new MP3 player has been invented that looks just like a beautiful, sexy full size naked woman. I know, edgy, right? And unfortunately teenage boys have been getting their dicks chopped up by sticking them where the fan is (and I don’t think you need me to spell out where the designers have put the fan. You do? Ok – V.A.G.I.N.A. There you go). This misogynistic, unfunny crap stars… wait for it… RICHARD GERE! It’s awful in every single way and it makes Pretty Woman look like a feminist manifesto.

Truth or Dare – Halle Berry plays Emily and Stephen Merchant plays Donald, a couple on a first date at a restaurant. To liven things up a bit Emily suggests a game of truth or dare and soon he’s pinching men’s bums and she’s blowing out candles on a blind boy’s birthday cake. Eventually he has a penis tattoo on his face and Austin Powers tooth implants and she has the world’s largest boobs. It’s actually quite funny, again as both of them are good actors. But again it’s too long.

The Proposition – Doug (Chris Pratt) and Julie (Anna Faris) have been dating for a while, when Julie admits to Doug that she wants him to poop on her (not shit on her – apparently that’s what you do to prostitutes, not the woman you love). Doug is understandably nervous about this but you’ll be pleased to know that it all ends happily.

There were more sketches but I’m losing the will to live so if you want to see them for yourself you can buy or rent Movie 43 below.

Also if anyone doubts George Clooney’s ability to read the zeitgeist just let me tell you that when he was asked to appear in Movie 43 his answer was apparently “Fuck off”. George, I’ll forgive you for Solaris AND Hail Caesar, just for that. I’ll even stop making jokes about Amal getting her marigolds out to dust the Elgin Marbles.