You are here: Home / Film Reviews / Aliens vs. Predator: Requiem 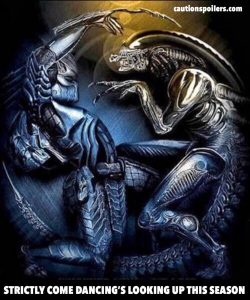 Warning: spoilers ahead, though only of the ending as I wasn’t entirely sure what was happening during the actual film.

When it comes to predators vs aliens, I always find myself rooting for the predators. We can recognise something in them can’t we? For instance, their similarity to Earth’s own hot-but-dim guys – sexy, until they open their big mouths.

And predators seem less of a threat to humanity – partly a case of “my enemy’s enemy is my friend”, and partly as predator kills of humans in this franchise-of-a-franchise often seem to be collateral damage. Whereas with the alien, it’s the actual task in hand (remember Ash’s description in Alien: “It’s structural perfection is matched only by its hostility… I admire its purity”)

We’re also probably predisposed to find some humanity in a creature with arms, legs and a head where we’d expect them – like a feelz version of pareidolia, where one’s brain sees familiar patterns and faces in something non-human or inanimate.

This is a bleak and dark (in both senses) film, set to a soundtrack of predator growls, alien squeals, and the screams of humans.

And while this is not a good movie by any stretch of the imagination, it does have an impressive determination not to be waylaid by sentimentality. A  boy in a forest sees his dad’s arm lopped off with acid. At one point the alien is seen breathing heavily over a row of adorable newborns, swaddled and wearing little hats, in their clear plastic cots in the hospital nursery. Soon after, a small ward of pregnant women are impregnated (we actually see the eggs pushed down one victim’s throat), later to be found cocooned but still alive. As the film ends with a nuclear explosion flattening the town and the countryside around it, and as only a small group escape in the hospital’s only helicopter, I think we can assume the babies didn’t survive.

I really enjoyed Alien vs Predator, the first film in the crossover-franchise, where the two species who have done battle for centuries fight to the death in an underground pyramid. And while social media can do a lot of harm I will always be grateful that Twitter allowed me to find the (very) few other people who agree with me (the same is true of Prometheus though if I’m honest there are probably more Alien vs Predator fans). This movie starts with the injured predator from the previous film being returned to his home planet in a predator ship. But he’s carrying an alien cargo inside him.

What bursts forth is part Alien and part Predator – a Predalien. And once the craft crashes back down to earth in the Colorado forests, no one is safe. First to be attacked are a man and his young son out hunting. Soon the xenomorphs which burst forth from their bodies are grown and in the sewers, then the town. But a dying predator sends a distress signal back to his home planet and a predator warrior arrives on Earth, to destroy the aliens.

The locals have no idea what they’re up against, though many are at least armed. And they have Kelly (Reiko Aylesworth), just back from a tour of duty in the army and tying to reconnect with her young daughter Molly who’s been at home with dad for the duration.

Also trying to survive are just-out-of-jail Dallas (Steven Pasquale) and his brother Ricky (Johnny Lewis) who works as a pizza delivery boy. He’s in love with his beautiful classmate Jesse (Kristen Hager) and is bullied by her boyfriend and his friends.

There are a few fun scenes, even though they’re predictable. Little Molly claims to have seen a monster through her window at bedtime. Both parents give her a mini lecture about monsters not being real before dad approaches the window and is promptly killed. Later the final group are arguing over whether to go to the hospital and escape in its helicopter, or follow the army’s orders and head to the centre of town to await the airlift. Some are convinced it’s a trap, to leave them exposed to the aliens so the government can contain the outbreak. “That’s crazy, the government doesn’t lie to people!” says one, as the others look at her in utter astonishment.

The imagery is a rather unpleasant mix of motherhood and sexual violence. Watching a pregnant woman lying in hospital having a huge appendage forced down her throat is nasty. When the victim’s abdomen bursts open to reveal several alien babies, mouths opening and closing, they look like a blood-soaked group of baby birds in a nest, just hatched and chirping for the first time. One of the great themes of what we could call the uninfected Alien movies – by which I mean the non-crossover ones – is the idea of two mothers, Ripley and the Alien Queen, fighting to the death to protect their young. Neither fit feminine ideals but both also behave how we expect mothers to at the most primal level, protecting their offspring. Aliens vs Predator: Requiem utilises these ideas but doesn’t say anything important or interesting about them.

Horror and sci fi can still be fun, or scary, without allegories and deeper meanings – so it’s unfortunate that this movie falls down here too. And that’s mainly because it’s almost impossible to see what’s going on – and if you can’t identify an individual among the mass of threatened townspeople it’s hard to care what happens to them.

The film is just so dark. It’s nighttime, the power goes off, and even the hospital only has emergency lighting. The darkness and the juddering, jumping-around shots mean it is really difficult to work out what is going on. Sometimes the only light seems to be the shine on an alien shell, the acid dripping from its jaws, or occasional splashes of colour as the Predator’s heat-seaking vision lights up fleeing humans with orange and blue. Less confusing cinematography would have made the film more enjoyable and scary.

And as I’ve spoilered the ending, I might as well tell you who survives. The Predator and Predalien fight on to the death in the hospital, as the helicopter takes off (we know Kelly has to survive as they tell us that earlier – she’s the only one who can fly it). Safe(ish) inside are Kelly, Molly, Dallas and Ricky. Which means – RIP Jesse. Think of all the free pizza Ricky could have got you if you’d survived!