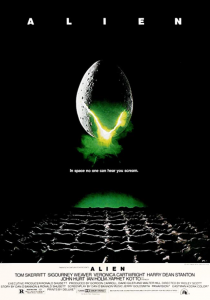 So often horror films have an extra opponent every bit as evil and twisted as the main threat. Fighting on one front for a hero or, more usually, a heroine, simply isn’t enough to test them to their limits so there need to be two adversaries.

Alien has its xenomorph but it also has Ash, the coldly focused android who has been built to be so calculating and single-minded that it’s no surprise he sees a kindred spirit in the alien: “Its structural perfection is matched only by its hostility… I admire its purity” he tells Ripley.

I’ve seen Alien on many occasions but I still can’t help hoping this time it’ll be different and everyone survives. Like when I read my favourite Tudor history books and hold my breath in case Anne Boleyn can talk her way out of it.

(Apparently Scott is a huge fan of Conrad which is why many of the ships in his films are named after his books or characters. Nostromo is one of those classics on my “claim to have read but have never actually got round to it” lists, but having looked into it the book describes the character Nostromo described as “viewed by the rich as their useful tool”, which makes a lot of sense).

The Nostromo crew are a close, mining team but with typical arguments over status, mainly money and contracts and “not in my job description”.

But soon there’s a signal from an unknown planet, a trip to the surface and an encounter with the space jockey: a giant humanoid with what looks like an elephant’s trunk, lifeless and fossilised in the seat of a spaceship deck, his chest burst open. Back on the Nostromo Ripley realises that signal could have been a warning to stay away rather than a desperate plea for assistance, and after Kane is attacked by a facehugger, she tries not to break quarantine rules. But he’s brought back onboard anyway, the thing is removed, and all is apparently well.

Until their next mealtime, when Kane starts choking (“What’s the matter, the food aint that bad, baby!’ says Parker), and as his horrified crewmates try to hold down his jerking body, a grinning creature bursts out of his chest.

After nearly 40 years and so many alien films you would think it would be hard to watch this scene and feel any sense of shock of wonder – even people who have never seen the whole movie have probably watched it, or parodies of it. But actually the characters’ shock is so total, it really is like seeing a baby alien for the first time. Nothing is rushed and the emerging alien pauses, looking around. There’s noise, then silence, then noise; panic, calm, then panic; before it scuttles away.

Attempt to find and kill it are failures; what is “it” anyway? As crew members are picked off one by one, Ripley takes charge. The survivors are jittery, and Lambert is downright terrified as they discuss their options, wanting to draw straws so as not to overload the escape shuttle. (I had a lot more sympathy for Lambert this time around; she really reflects our terror back on us and while we all like to think that we’d be Ripley in a situation like this there are probably far more Lamberts among us than we’d like to admit).

Once Ripley has access to Mother, the ship’s computer, she finds out what the real plan is for the crew, and Ash – already sneaky and untrustworthy – becomes genuinely threatening. Mother is well named. Capable and reassuring at the same time, helpful but uninvolved, one of those classic 1970s mums who gave birth to us then pretty much let us get on with it as we’d probably be ok. Eventually providing some answers, initially there is no straight response; in fact she reminds me of those old mum sayings like “I’m as old as my tongue and a little older than my teeth” when it would be easier to just say “I’m 45”.

Alien is a film mostly beautiful to look at but occasionally rather obviously studio-bound. The darkish sky as they take off from the planet – blue-er than navy, blacker than blue, with the engines firing, is really stunning. But some scenes look low budget. Mother is gorgeous – a small room decorated with cream panels each glistening with flashing golden lights in perfect symmetry.

The rest of the ship is clean and tidy but functionally dark and cavernous, with the drip drip drip of what is hopefully water. Which makes it weirder when we see someone’s personalised sleeping area surrounded by endless shots of naked women cut from magazines. The uniforms are 70s jumpsuits, functional but now fashionable again and everyone has that leanness that was the norm back in 1979 and also in 2122. Alien movies always have undercurrents of sex and this is no exception: Lambert stands stock still while the alien tail moves slowly up her leg; facehuggers enter through mouths; creatures are birthed and kill their host.

Ripley is still held up as a feminist icon, but though her being female is rightly hugely significant there is also a lot here about class; just watch those arguments at the beginning about money and percentages, though ultimately all of them are simply worker fodder for the corporate machine.

I’ve always thought of Alien as a brilliant film but I had forgotten just how brilliant. Ripley’s terror as she finds the alien in the shuttle, as they blast away from the Nostromo, is utterly convincing. In fact all the way through she comes across as a woman who is capable of more than her role within the crew but who has never been really tested. You feel every step up in her decision-making, every new shock just when she was thinking she was home and dry.

And Ripley just starting out, before she is hardened by her battles with the xenomorph, and with those just as dangerous human or android enemies, when she doesn’t know her opponent’s limits or her own, is the most exciting Ripley of all.