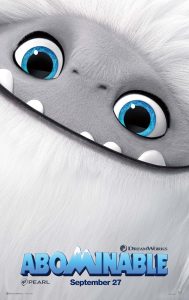 This is the third family film about mythical apes in a year, after Smallfoot and the sadly underseen Missing Link. I’m not sure that’s a bad thing though – even the most cynical child (they do exist, I used to be one) will be delighted by Everest the yeti, who when rolled up resembles a giant fluffy snowball.

Everest himself is – literally – a big kid. And he’s so goddam fluffy! So fluffy that once I started writing this review I had to go on a mission to find synonyms for “fluffy”, though I didn’t find anything else that really described Everest’s fluffily fluffy fluffiness.

Gorgeously cuddly, he may be a giant yeti but he’s also still a small child, bonding instantly with little Peng, even though neither can understand the other’s language.

Those earlier movies do mean that Abominable often feels very familiar. Then again, I doubt kids will ever tire of watching abominable snowmen (and when they do, there are Bigfoot horror movies to move on to).

Beyond bonding with a fluffball, Abominable is about the real magic of nature – an understanding kids often already have, until the world squashes it out of them. It’s also terrific on grief, as Yi (Chloe Bennet) finds a way to reconnect with her late father through music and travel; and shows the joys of persevering with your goals and having faith in your own gifts.

Yi lives in an apartment building in a big city. Her dad is dead, and she’s avoiding her mum (Michelle Wong) and her Nai Nai, or grandmother (Tsai Chin), working all day at odd jobs to raise money for a trip her father always promised they’d make together.

He was a violinist, and the first step on Yi’s journey to coping with her loss is when she picks up her own violin again (the score by Rupert Gregson-Williams, is just gorgeous: sometimes mournful, sometimes uplifting and sometimes triumphant, whether Yi’s violin music or even the yeti’s own low, melodious humming that precedes his transformative powers).

When she finds an escaped yeti on her rooftop, she and Jin (Tenzing Norgay Trainor) who lives downstairs, and his young basketball-mad cousin Peng (Albert Tsai), work together to take him home to Everest.

The yeti (Yi names him Everest) has escaped the clutches of evil capitalist Mr Burnish (Eddie Izzard), who wants to show him off to the world before selling him on.

My 10 year old loved Abominable (favourite bit: when Jin, Peng and Yi are convinced Everest has died, and behind them in the camouflaging snow two big eyes suddenly pop open) and I actually cried at the end (happy tears!)

This is a beautiful movie that centres family and friendship, from Yi’s granny cooking pork buns in their flat to Yi’s determination to see Everest safely home, and Jin risking a lot more than his hair and favourite sweater to help her.

It’s also the kind of funny, hopeful story that will resonate with children: younger ones particularly will love Everest and Peng’s playfulness and complete acceptance of each other; older ones dealing with loneliness or being an outsider (Yi is a loner and often mocked) will see how friendships can celebrate difference.

A co-production between Dreamworks and Chinese animation studio Pearl, Abominable has neither a white saviour complex nor a plethora of white characters. The Asian characters are all voiced by actors of Asian heritage, and the film is rich in Chinese culture and traditions: the power and strength of family, as the three travellers watch the stars and talk about their ancestors shining down on them; Nai Nai cooking traditional dishes for Yi and her friends; Yi playing her violin for her father at the Leshan Buddha. (Sarah Paulson does pop up as Burnish’s zoologist Dr Zara, though amusingly her character turns out to be an American impersonating an English woman.)

The cast are excellent: Bennet is brilliantly determined and assertive, while Izzard is clearly having tremendous fun as evil Mr Burnish travels his own path. Burnish moves from horrible capitalist prepared to sacrifice the first yeti ever found, to the kind of Victorian animal lover who would weep with joy at the beauty of a creature in its natural habitat and then demand it be stuffed and mounted for his library wall, and beyond.

The children’s (literal) journey is unusual in that they have no idea how to get there, and there’s no planning involved at all; initially it’s about escaping Mr Burnish. They’re resourceful and have to think on their feet (when they’re not snuggled up in Everest’s cotton wool coat). And it’s a beautiful and colourful journey, from the brightly lit skyscrapers of their home city, via plains and desert to the icy peaks of the Himalayas.

Pursued by Burnish and his henchmen/women, the children at least have Everest’s superpower to assist them. He can grow anything natural to enormous size, though at first he’s not aware of his own strength. An attempt to grow blueberries to feed them all on their journey ends with a bombardment of purple cannonballs; later they drift through spiky rock formations hanging from an expanded dandelion clock.

The only (slight) problem is that he’s too powerful. We know this is going to have a happy ending, but any peril dissipates once we know Everest can get them out of the tightest spot in an instant. He’s the Captain Marvel of mythical mammals.