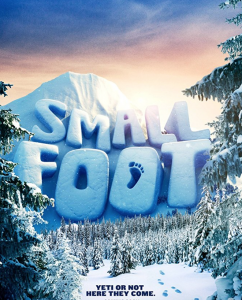 Yeti do exist but they’re not the abominable ones. They’re huge and hairy though, living near the top of a huge mountain above the clouds in the Himalayas.

Yeti society is governed by the Stones – no not those Stones, though the Yeti who start questioning the stories they’ve been told aren’t getting much satisfaction.

In a legend only marginally stranger than that surrounding the birth of Christianity, the Yeti believe themselves to have been created from the butt of the Great Yak, and that the sun is actually a Great Snail moving slowly across the sky. To wake the Great Snail, and ensure its continued progress, each morning senior Yeti Dorgle (Danny DeVito) is catapulted across several hundred feet of open sky, his now-flattened head aiming squarely (roundly?) at a giant gong.

The Yeti are credulous but happy. Apart from the Stonekeeper (Common), a cross between Moses and the man behind the curtain at the end of The Wizard Of Oz, most of them are unaware there’s anything under the clouds, and anyone questioning the Stones is gently pressured into submission.

Smallfoot‘s story is an ode to championing critical thinking combined with kindness. It encourages children to question, while also helping them to understand why people might have been fed the stories they have. Be enlightened but do so without belittling people who have preferred to believe something.

(While this is a welcome message for children, politicians and people on Twitter, I’ll admit my cognitive dissonance was strong on this one. I’m a big fan of critical thinking, but then my 6 year old lost one of his baby teeth on the way home from Smallfoot – and while it’s costing me £1 a time to keep the dream alive, I’d like him to maintain his faith in the Tooth Fairy, as well as the Easter Bunny and Father Christmas, for a little while longer.)

Luckily a few critical thinkers, including the Stonekeeper’s daughter Meechee (Zendaya), have formed a secret society – the SES (short for either the Smallfoot Evidenciary Society or Smallfoot Exist, Suckers!, depending which SES member you talk to).

Smallfoot is the Yeti term for humans, though we tiny creatures are considered to be another myth; until Dorgle’s son Migo (Channing Tatum) sees a plane crash near him on the mountainside, and a man with two small feet parachutes out, sees Migo and flees downwards.

The Yeti villagers don’t believe Migo, and the poor Yeti is banished from his home. Determined to find a Smallfoot to prove to his friends and family that they are real, Migo is soon being lowered down through the ring of fluffy clouds by the SES.

With his show about to be cancelled, Percy is prepared to throw away his remaining shreds of integrity by getting his producer Brenda (Yara Shahidi) to dress up in a furry Yeti suit so they can stage a man-meets-snowman video that he hopes will go viral.

What follows, when Migo returns home with his Smallfoot exhibit, is more than simply the breaking down of cultural barriers in the Yeti village. The Yeti have to decide how they can maintain their way of life now their existence is known; especially once the Stonekeeper shares his knowledge of previous human attacks on the Yeti which sent them fleeing up the mountain in the first place.

In some ways it’s a familiar story. In fact I’m thinking about creating a whole new film category in my content editor, called “Just Who Are The Real Monsters?” to go alongside Thriller / Drama / Documentary.

Having said that it’s fair to say that Smallfoot digs deeper and with more nuance than most animated children’s films, with a series of surprisingly strong messages among the usual snowdrift-related falls and comedy head injuries. Later developments in the Yeti village, as the Stonekeeper battles Migo’s revelations, even highlight the ease with which people can be persuaded to ignore the evidence of their own eyes, if the propaganda is strong enough.

But if that sounds heavy going for your five year old, fear not, as Smallfoot is also an engaging, warm and witty movie with some bouncy if mostly forgettable songs and a sense of history (albeit Yeti history) running through it.

The characterisation is deft: Gwangi (LeBron James), a large purple SES member has a nice line in woke paranoia: “They’re listening! The ears of oppression!” he worries. And Dorgle’s gradual awakening, when he stars to notice the cracks in the stories he’s been upholding, is rather moving.

It’s pretty too, if not as sophisticated as some we’ve seen. The songs are amiable enough; there’s a rewritten Under Pressure to illustrate Percy’s work dilemmas, though I’d rather listen to the actual Under Pressure. The absolute standout song is dark rap Let It Lie, sung by the Stonekeeper and relating how the attacks of the Smallfoot led to the Bigfoot escape, and the development of the Stones’ laws to keep them safe.

While the messages are quite sophisticated, overall this is a film is best suited to younger children. My 9 year old had started losing interest before the end, though my 6 year old refused to tell me his favourite bit as “I liked all of it”. (He also instantly recognised Corden’s voice, thanks to repeated viewings of of both Peter Rabbit and The Emoji Movie. Corden is a cheery presence, though maybe by next half-term’s cinema visit we’ll have someone new.)

Smallfoot is continually warm, mostly humorous and occasionally hilarious, with a few standout scenes: the SES’s Smallfoot relics, which they handle with huge reverence, are great fun – including a loo roll they mistake for a scroll of wisdom. The literally frozen solid Percy being thawed out on a spit over a fire will make most bloodthirsty youngsters guffaw, as will Dorgle’s pride in his flat head and reduced height since he started firing himself at the gong each morning.