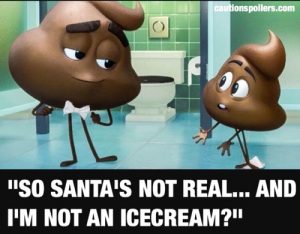 Dissing cheery children’s films can feel a bit like kicking a kitten and we all know how that would go down on social media, even in animated form.

But sadly The Emoji Movie – while not as irredeemably, horribly awful as I was expecting – is still pretty rubbish.

As a film for preteens? No. It’s one big advert for apps, and they’re at an age where they are starting to own smartphones and have control of their own purchases. Though to be honest I can’t see that demographic liking the film much anyway as it is such a slight tale, and children seem so much more sophisticated these days (I look back with fondness on my own obsession at 10 with my almost-realistically-boobed Cindy dolls).

For young children it’s quite fun. The story is simple, the characters recognisable (not to me but then I still haven’t downloaded that upgrade they’ve been reminding me about for a year), it’s mercifully short, and there are a handful of decent jokes in it.

Gene (TJ Miller) is a Meh emoji but he is hiding a terrible secret – he can actually perform several emotions, but as he’s still young he can’t always control them when they appear.

He lives with his parents, Mary and Mel Meh, in Textopolis, an emoji city in the text app of teenage Alex’s smartphone.

In Textopolis the aim of every emoji is to start work in the cubes – where they stand, their expression fixed, waiting for Alex to choose them for a text. The desperation to work in the cubes reminded me of vast call centres when that’s all there is to look forward to for eternity as all the good jobs have disappeared overseas.

His parents finally let him – with some misgivings – start work. The cubes are run by Smiler, the original Emoji, whose rictus grin belies a coldly evil heart. Or maybe she’s just a focussed workplace manager aiming for excellence.

Cube life is ruthless. Hi-5 (James Corden) is considered old hat now, next to the newer emojis. He’s been chucked out of Favourites (sorry I just can’t type Favorites) – replaced by the cooler Fist Bump – and banished to the corner of the screen where Alex can’t even see him.

Alex’s story is very basic. He fancies schoolfriend Addie, and tries to send Gene as an emoji message, but Gene can’t suppress his other emotions in his excitement at being picked for the first time and it all goes horribly wrong. Alex starts to think that his phone is malfunctioning – so in Textopolis, Smiler decides that Gene must be deleted to protect the rest. She sends the giant and scary red and black Anti Virus Bots after him, which is what starts his escape through the phone.

At Hi-5’s suggestion the two of them travel to the Piracy app to find a hacker to help Malfunctioning Meh be reprogrammed as, you know, Proper Meh.

In Piracy – the barman there is a Trojan Horse – they find Jailbreak (Anna Faris), a female hacker. She can take them to The Cloud, where if they can get through the flame-spurting Firewall they can be raptured, sorry I mean reprogrammed.

As with most films aimed at children, the overriding theme is one of staying true to yourself which is a perfectly acceptable message for anyone as long as you’re not addressing a rightwing mysogynist homophobe.

It’s quite fun for a few minutes – and true to life, what with all that wandering from app to app not getting anything done. But the story does drag even though it’s not a long film.

There is the essential rescue of a main character as it turns out there’s no “I” in emoji. Well actually there is. And a backwards “Me”. But you know what I mean.

And it is a 90 minute marketing exercise. Download Spotify! And Instagram! And a dance thing I can’t remember the name of because I’m 46 and I only get down to Reach by S Club 7 at weddings!

Most of the humour is groan-worthy though there are a few good jokes. I liked Gene’s parents, Mr and Mrs Meh, trudging through life feeling slightly fed up the whole time (“I’m so nervous I could almost shrug” says Gene’s dad Mel waiting to see if Meh is picked). The poop handwashing gag went down well with my two germ-ridden ferals. And there’s a good visual joke as an app gets deleted and the others move round, threatening to crush Meh, Hi-5 and Jailbreak who are between apps.

It isn’t always accurate though. The aubergine (I can’t bring myself to type eggplant) is languishing in the deleted emoji lounge but I thought that was meant to be enjoying a second life as a sext toy.

And did anyone check the movie’s Instagram? Where were all the “take me as I am with all my flaws” selfies of stunning women, or memes about coffee and Monday mornings?

Most of the characters, being emojis, are one-note. Luckily Jailbreak is spiky and technologically very able, though despite fighting against her sexist emoji origins from the start, at the end she comes perilously close to being held responsible for Gene potentially deciding to be reprogrammed. Frankly the last thing young girls need is the message that they are responsible for the happiness of boys.

The story doesn’t make much sense. Is there a Textopolis in every phone? Are these mini-worlds like parallel universes, all packed up against one another? Am I adding too much philosophical weight to this?

I’m no expert on kids’ culture or indeed smartphones (the messages I get on my phone are mostly just of the “Storage Full” variety), but it’s obvious that this could have been a much, much better film, with much better jokes – even within the confines of what is essentially an advert with a storyline squeezed in.