You are here: Home / Film News / John Wick’s in Italy but his Holiday Wardrobe is Tactical in New Trailer for Chapter 2 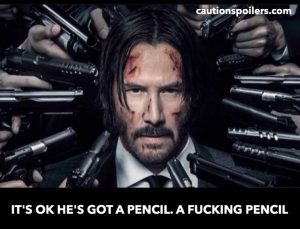 Last week we got a teaser trailer for John Wick Chapter 2 that saw everyone’s favourite reluctant assassin who-once-killed-three-men-in-a-bar-with-a-fucking-pencil being measured up for a new suit for a party (the Tailor Teaser Trailer?).

At New York Comic Con a bigger trailer dropped (yes now we get trailers for trailers. Though with John Wick no one’ll be complaining).

Check out Teaser Trailer 2.0  below. Turns out that suit is tactical. And apparently the new film is set a mere four days after the end of the last one which doesn’t leave John Wick much time to recover from the gunshots, car crashes, and plastic-bag-over-the-head we saw last time before he’s off again. And still no retirement!

And yes I’ve now typed Trailer so many times it just looks wrong however I spell it.