You are here: Home / Film News / John Wick 3 Is A Goer And He Probably Shoots People 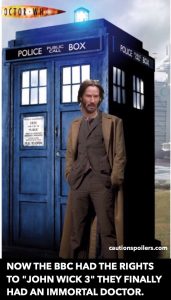 It’s been a whole two days since the last John Wick news when the trailer for John Wick Chapter 2 dropped at New York Comic Con, and I know we were all starting to get withdrawal symptoms.

There’s now been confirmation from director Chad Stahelski that John Wick (Chapter) 3 is on the way, with Lance Reddick and Ian McShane staying on.

Hopefully the franchise will be like the Bible and go on for millions of chapters and several centuries until every actor specialising in assassins has had a go at being shot dead by Wick and he has to take on Daleks and Cybermen, perhaps with K9 as his sidekick.

Keanu is immortal after all. And we could find out he’s actually Doctor Who-ick.