You are here: Home / Film News / New poster for new Emma, but does it cut the mustard?

It’s the final poster, with the tagline Love Knows Best, which is quite true if I were to change my first name by deed poll to Love.

The film is another adaptation of Jane Austen’s classic novel about a sweet, privileged meddler, and with the heroine played by Anya Taylor-Joy I think we’re allowed to ask ourselves if this version will be the G.O.A.T. 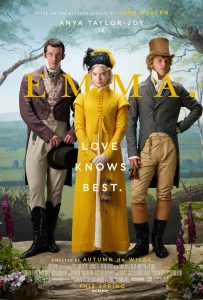 Directed by Autumn de Wilde, a Jane Austen character name if ever I heard one. It’s out in the UK on Valentine’s Day, so make it your date movie and start coquettishly twisting those bonnet ribbons, and tipping that top hat. The US can watch it a week later on 21 February.

You can see the trailer here.