When you get to my age it feels like Emma adaptations come round more often than unexpected Jon Bernthal cameos, so I was surprised to discover it’s actually 21 years since Gwyneth Paltrow’s big screen outing as the “handsome, clever and rich” – and meddlesome – heroine.

And this EMMA is a hugely enjoyable, fresh and exceedingly crisp take, that nestles into its period setting yet reaches out to ours.

So mannered it’s as if every movement has been measured with a set square then timed with a stopwatch, it’s funny, as girls trot along in time, giggling whenever a handsome face squished between a top hat, frock coat and slim britches comes into view; but it also feels like a comment on the society they live in, where spoken and unspoken rules govern everything, particularly for young women (a bit like now). 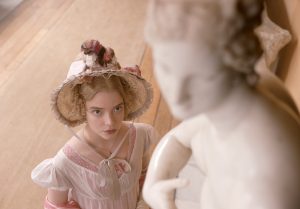 And while the setting stays the same, the title EMMA. is now ALL CAPS, finishing with a full stop. There have been lots of period drama jokes about it, though this is a story that translates to any setting, and there are certainly allusions to modern day influencers and the playing out of privilege, if in a smaller and safer world. But is this EMMA. – yes I am going to say it – the G.O.A.T?

Director Autumn de Wilde is known for music videos and rock musician photography, though pleasingly her name also suggests an independently rich 19th century woman who wears a top hat and has a snippy mother in a lace cap who just won’t die. The screenplay is by Booker Prize-winning author, the elegantly named Eleanor Catton, who could easily be a genteelly impoverished yet fearsomely clever Regency heroine who catches the eye of a brooding, unmarried gentleman with several spaniels and 10,000 a year.

Together they’ve crafted a hilarious update on Austen’s familiar comic tale that luxuriates in the beauty of its protagonists’ wealth, while using it to highlight Austen’s caustic social commentary and the aspects of Emma Woodhouse’s behaviour that make her, in modern parlance, problematic.

And though In the middle a slight tedium sets in, listening to other people’s relationship dramas, like looking at their Instagrammed holiday photos, is often like that; so the movie does well to dip only briefly.

Amid the jokes there’s also underlying sadness and fear for many of the characters – slyly present, but without doom and gloom. 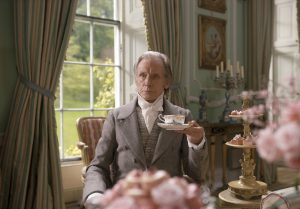 Emma Woodhouse loves the rich, and the poor, though seems less sure of those in-between, on whom she focuses many of her machinations.

This may be a film about first world problems, set as it is in Regency England in a golden sandstone village. But matters of the heart, and then gossiping about everyone involved, still fuel much of social life today, both online and off.

Anya Taylor-Joy is the newest incarnation of Miss Woodhouse, and she’s very good; brisk and forthright, displaying that mixture of conscious and unconscious manipulation borne of wit, youth, wealth, self-confidence and an indulgent father.

Bill Nighy is a fretful delight; I’d go as far to say transfixing, as Mr Woodhouse obsesses over draughts that might inconvenience his guests. (Though to give him his due no one has been forced to move into his best spare bedroom for several weeks having come down with a sniffle when round for tea, so it’s clearly working.) Mr W’s Eeyoreish tendencies stem from fear of being alone and reminders that his wife is dead; his older daughter Isabella’s wedding is looked back on as a “terrible day”. 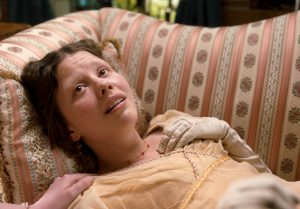 Across the park lives Mr Knightley (Johnny Flynn, looking like the Regency era’s answer to Simon le Bon), also handsome, clever and rich, and less concerned with status for its own sake than the requirements it puts on those at the top, particularly kindness. He’s the only one happy to pull Emma up when she goes too far, upbraiding her when she publicly insults Miss Bates (Miranda Hart) with a joke she erroneously believes the older woman too dim to understand.

Harriet is young, naive and easily impressed, and everyone pretends she may be the daughter of a gentleman, while never actually believing it; leaving her dangling in a no man’s land of heightened expectation and dubious position. (Goth is terrific, desperation and hope playing out across her trusting face between unsure giggles.)

Prone to those giggles, her bonnet and expressions making her look remarkably like Aunt Sally from Worzel Gummidge (1970s version), she attends on Emma constantly, putting her happiness in her new friend’s hands. Emma is first determined Harriet marry the obsequious vicar Mr Elton, pulling her away from a man who loves her by convincing Harriet she’s too good for him. Her misguided interference threatens devastating consequences for Harriet, who has no fortune. 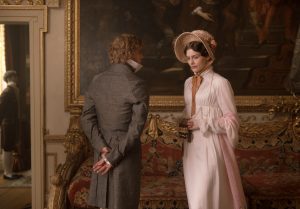 Gossip abounds. Mr Weston’s self-regarding son Frank is breathlessly discussed (the home he’ll inherit from an aged aunt is regularly talked about as “one of the finest houses in Yorkshire”); his no-shows at family events ratchet up the local hysteria, an eventual appearance causing heart flutters throughout the village of Highbury. Emma rules a very small world of sandstone houses and minor tittle-tattle, and the arrival of Jane Fairfax (Amber Anderson), Emma’s rival in accomplishments if not in wealth, pulls her up short.

Costume designer Alexandra Byrne also worked on Mary Queen of Scots, where she used non-traditional fabrics to tell the story; and last year’s Aeronauts, featuring a main character unafraid to use her own gaudy outfits to sell her adventures to the crowd.

The clothes in EMMA are often colourful as well as gorgeous and detailed, denoting status as much as fashion (the stiffer the neck collar, the higher the perch, perhaps?) In one scene both Emma and Harriet stand together in white dresses, but Emma’s is much more elaborate, intricate and high quality – it costs money to be a vision of simplicity. Harriet’s is an approximation, like when magazines show you how to copy a socialite’s look. 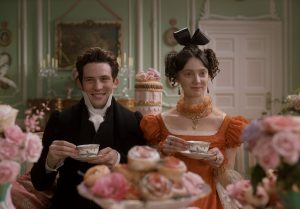 The pupils from the girls’ school nearby regularly scuttle past in a cheery, giggling crocodile; yet in their red cloaks and pale bonnets resemble a chorus of handmaids from a dystopian operetta where poorer women have no control over their own destinies. Oh wait.

In a small world of pretty colours and trims, the centre of gossip and intrigue is not WhatsApp or Twitter but the local haberdashers, a large and airy shop with bolts of gorgeous fabrics stacked on shelves and dressmaking knick-knacks everywhere. In fact much is airy and light, and it’s fitting that with its ornate white plasterwork and blue walls, Emma’s home looks inside like an elaborate wedding cake.

rent emma on digital from amazon.com

Watch the trailer for EMMA.