You are here: Home / Film Reviews / Mary Queen Of Scots 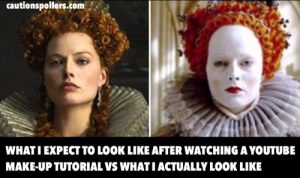 To shore up their throne a monarch will lean heavily on symbolism, as does director Josie Rourke; so much so that the constant allusions to the symmetry and asymmetry in the two queens’ lives sometimes threaten to overwhelm the whole movie.

My advice is simply to lie back and enjoy it, as otherwise your frustrations will bubble (and besides, I like patterns).

This is not a straight biography. The two queens never met in real life, for example. (Not that it matters – as I said in my Outlaw King review we remake historical dramas in the image of our own times.) Neither is it an entirely stylised retelling.

But while Mary Queen of Scots opens with Mary’s execution in 1587 (in the brilliant red which signifies a martyr who suffers a violent death) it doesn’t really know how it’s then going to get to the end of the film. After two hours we’re still decades away from Elizabeth finally signing her cousin’s death warrant.

Mary (Saoirse Ronan), only 18, returns to Scotland a widow after the death of her husband, the French king Francis II.

She’s a Catholic; her half-brother the Earl Of Moray (James McArdle), who has been ruling as regent, a Protestant. Her position is precarious from the off, what strength she has deriving from her own formidable yet naive determination, and her claims to the Scottish and English thrones.

Communication with England’s Elizabeth I (Margot Robbie) is by letter and portrait. What can you tell from one of those white-faced, pointy-chinned paintings so beloved by 16th century nobles? Quite a lot it seems.

Mary alternately cajoles and threatens her cousin Elizabeth, constantly pushing to be named Elizabeth’s heir. Meanwhile both are urged into marriage. Elizabeth pushes back, determined not to though she wants a baby.

Darnley is the last man who should be king. The look on Mary’s face on their wedding day when she realises what kind of man he is would have given Elizabeth nearly as much joy as Mary took from the news that Elizabeth was suffering from smallpox.

Image was everything, and this film is drenched in gloriously rich colour and texture, as two lonely queens are forced to fight the other. Not unlike now, there’s often only room for one woman on top while so many mediocre men mill around.

Both beautiful, with long vibrant copper-coloured hair piled high and wide, one queen is often on the up while the other is crashing down; though the imagery Rourke surrounds one with often mimics the other’s life.

A pock-marked Elizabeth is shrouded in a chiffon veil as she rushes into the hall where young nobles practice swordfighting, to collapse on her rumoured lover Leicester; her ladies-in-waiting rush to shoo the other men out of the doors as he lifts it to look at her. In Scotland, Mary is half-hidden behind the chiffon drapes around her bed, as Darnley approaches (there’s a sword fighting metaphor there too, I suppose).

Much later Mary sits with her legs apart, bloodied sheets from giving birth to her son between them. In England, Elizabeth does the same, between her legs a river of red paper curls from the pretty floral picture she’s been trying to craft.

Mary is often in practical blue denim, shiny armour decorating her dress as they ride out to a skirmish with the English. More hemmed in than her English cousin at her court, she seems freer when she’s outside on the moors, hair windblown and a natural bloom in her cheeks. Elizabeth’s increasingly stiff clothes are as heavy with meaning as the weighty jewels that decorate them. Her skin after smallpox is thicker and rougher. Increasingly hidden by white make-up she’s also withdrawing from her previous, warmer persona.

The Scottish nobles are wilder, hairier, and less urbane than their English counterparts, the moors around chilly and boggy. England’s palaces are lighter and brighter, more modern.

Sometimes Rourke has fun at our expense: discussing what to do about Mary, Elizabeth says “kill her hope”, with only the tiniest almost imperceptible pause between “her” and “hope”. What is already in her mind?

Mary, 44 at her death, still looks fresh-faced and youthful after 20 years’ imprisonment in England. A director’s device, presumably; Elizabeth, exhausted by queenship, intrigue and illness, looks every day of her 54 years.

Elizabeth comes across as the more seasoned ruler, steering a steady course despite the vacillations she and Mary go through in their letters. Elizabeth has William Cecil (a canny and devoted Guy Pearce). Mary has Bothwell (Martin Compston); even he betrays her, though she’s certainly resilient.

In this world of men, both women are surrounded by loyal ladies-in-waiting. Elizabeth’s include Elizabeth Hardwick, played by Gemma Chan, saying almost nothing yet ever watchful and in charge.

(Chan is not the only person of colour in the film; there are a few black courtiers including Adrian Lester as Lord Randolph, Elizabeth’s ambassador to the Scottish court. The use of non-traditional casting is welcome. That’s not to say this is entirely artistic licence. While the real Lord Randolph wasn’t black, there were many black people in the British Isles at this time. Miranda Kaufmann’s book Black Tudors: The Untold Story is a fascinating read.)

Mary talks a lot about her strong claim to the English throne, though her power ebbs and flows; physically she is easily overwhelmed (there is sexual violence in the film though it’s carefully shot), and once protestant preacher John Knox (David Tennant) starts chipping away at her popularity, she’s left in a precarious position. He looks very like drawings we have of Knox (who founded the Presbyterian Church in Scotland). With his huge long beard and matted hair he’s like a reverse Rasputin shouting from the pulpit into the ears of a queen’s subjects that she is a whore.

And still the symbols of sovereignty are more enduring than monarchs themselves – no one must ride in front of Queen Mary even as those nobles behind her may be plotting her downfall.

The relationship between the two queens works brilliantly; how does one manage a threat from another? It’s certainly not that overused narrative that two antagonists who would in other circumstances be friends can’t survive without the other. Survival may depend on another’s elimination.

Robbie is phenomenal. Mesmerising whenever she’s on screen, her Elizabeth is familiar with the machinations of government and what a woman must do to stay in control, yet riven with jealousies over Mary’s qualities, even those that Elizabeth doesn’t actually need. It’s a portrayal both fully human and mythically regal.

Ronan’s Mary is forthright, her speeches and her unwavering belief in her family tree all she has. She’s often unlikeable (“I will not be scolded by my inferior” she tells the older and more experienced Elizabeth) needling her cousin in ways that seem entirely counterproductive – making the personal professional, and the professional personal.

Watch the trailer for Mary Queen Of Scots: