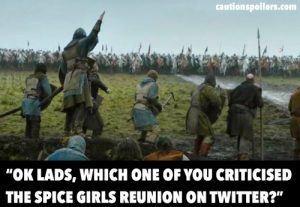 This is a traditional account of Robert Bruce’s fightback against the English as the Scottish nobleman claims his country’s crown, taking on Edward I and his son Edward, Prince Of Wales (later Edward II).

There are no gimmicks, and watching it on Netflix, it did feel as if TV is a good home for it; this is a Sunday evening movie, to watch indoors with a fire on, one’s rage and glee safely several hundred years’ removed from the action.

It’s impossible though, after the recent furore, to review Outlaw King without mentioning the P word. Yes, patriarchy (ha just kidding, you can come back now).

We do get to see the Pine penis, and if you want to know exactly when, Vulture is here to fulfil that need while I submerse myself in a freezing loch in an attempt to recover (actually that’s not true, there’s only one Hollywood Chris for me and that’s Christopher Plummer).

Also I’ll be honest and say that cinematographer Barry Ackroyd’s shots of the surrounding countryside are so enticing that I nearly missed the Pine appendage as Robert waded out of a freezing river after bathing. I am 148 though, and I make my own marmalade.

Outlaw King is an enjoyable two hours; of course, in parts it’s historically inaccurate (for instance, Edward II wasn’t at the real battle of Loudoun Hill, and his father, Edward I, was still alive then anyway). I did, though, love the two different scales of Scotland that director David Mackenzie gives us.

A tiny country, fighting back against a bigger, more powerful and aggressive neighbour; noblemen joining the fight for a free Scotland who can by then offer only a few men. But at the same time, it’s still a place of remote moors and lochside castles that take an age to reach. The final battle, too, is both epic and provincial, as a few hundred fighting men on a muddy field turn the tide of a campaign to free a nation, sometimes checking who they’re about to kill first.

I didn’t love the haircuts. They seem to fall into two groups: early years Take That, with a selection of particularly hideous undercuts; and late stage Britpop, all shaggy beards and grown-out layers, the fringes still alarmingly short. (The women’s hair looks fabulous, from Queen Elizabeth’s long plaits and luxuriant chestnut waves to her lady in waiting’s braided side-buns.)

Pine, despite his terrible mullet, puts in a very good and believable performance: his Robert filled with resolve, willing to take matters into his own hands, believing in both his duty to and right to the Scottish throne. (Robert does treat his wife Elizabeth with great respect, and they don’t consummate their marriage for a while; I suspect this is 21st century idealism imposed on a 14th century, 30-year-old lord, though it’s pleasing to see. Likewise his battle speech appealed to me – every generation rewrites history to its own template.)

Edward I (Stephen Dillane), invited into Scotland to solve a succession claim, has instead taken the country for himself. William Wallace is hiding in the forests. The Scottish lords, including enemies Robert Bruce and John Comyn (Callan Mulvey), a man who later might have played his cards closer to his chest, have had to promise fealty.

It’s after accepting Edward I as his king that Robert is given Elizabeth de Burgh (Florence Pugh) as his wife. Pugh lights up the screen when she appears, with a mix of youthful drive and queenliness, as the young woman who knows her mind, accepting her new country and her new side.

Then Wallace is captured and killed, his head gracing the bridge into London and the rest of him gracing other areas of the country. “Wallace is dead, the people are up in arms, there can be no peace” Robert warns his brothers.

Not everyone wants Robert to be their king, and his claims to be uniting Scotland start to sound hollow. Their army increases in tiny increments. Still, the Church is behind him; as he accepts the crown he’s declared an outlaw by Edward I.

While the Prince of Wales is marching back to Scotland, under the dragon banner which signifies that chivalry no longer applies, Robert is using what they have to his advantage.

This is an extremely muddy film, that mostly avoids getting bogged down (it’s had about 20 minutes trimmed since its Toronto Film Festival premiere in September). It’s stunning, in both senses: moorland covered in purple heather; lochs and chilly seas; a village of turf-roofed cottages; a queen locked into a wooden box prison, dangled over the side of a high castle.

Lights in the darkness are a theme; flaming torches, on land and on the water, illuminate the rich blue dusk as Robert is crowned King of Scotland.

The English have flaming arrows. Seen from the air, they soar over the tops of trees, before plunging to earth and embedding themselves in Robert’s camp in an ambush that leaves him staggering away.

Its brutality is too local to be numbing, from desperate stabbing and slashing in battle to the hanging and disembowling of one man in front of his villagers. A trebuchet sends a fiery mega-bomb from Edward I’s camp crashing into the wall of Stirling castle, still holding out against the English king’s siege. (“Now you can accept their surrender” deadpans Edward I seconds after the successful attack.)

The relationship between Edward I and his son Edward, Prince Of Wales (Billy Howle, great fun) has to be something of a sideshow but it’s still interesting. Edward junior is always bristling with suppressed anger, aimed at his father but displaced onto any other opponent. A liar and a brute, he alternately snivels and rages as the imprisoned Elizabeth laughs at him. (Edward I was an excellent administrator who treated the Scottish and Welsh brutally. He lived to 68, and I liked that for once the typically grey-haired movie monarch was probably an accurate description. Dillane’s scarily enjoyable portrayal certainly highlights the ruthlessness and deadpan humour that the comfortably powerful have.)

The final battle, of this film if not of Robert’s campaign, is at Loudoun Hill. The English are way more professional: more soldiers, better weaponry and lots of horses.

Robert can’t control the weather or his men’s bravery but he’s prepared the ground, literally, and can reasonably expect both fighters and clouds to act in a particular way. It’s an excellent send-off from Pine; Bruce’s speech pragmatic about motivating his small army, who’ve seen this before.

This is a battle won with planning, luck, and brutality: men fight with axes, swords, arrows, their fists and even the edges of their shields used as knives.

Naturally I sided with Robert, despite being mostly English (apart from the Scottish and Welsh bits).