You are here: Home / Trailers / Put down those new bonnet ribbons, there’s a new international trailer for EMMA

Emma – or is it E M M A. –  starring Anya Taylor-Joy is out next spring, and is a reimagining of the famous novel. 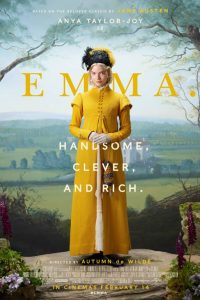 From director and photographer Autumn de Wilde, and Booker Prize-winning writer Eleanor Catton, this promises a modern take on a well-known story while setting it firmly in its original 19th century England.

“Jane Austen’s beloved comedy about finding your equal and earning your happy ending, is reimagined in this delicious new film adaptation of EMMA. Handsome, clever, and rich, Emma Woodhouse is a restless queen bee without rivals in her sleepy little town. 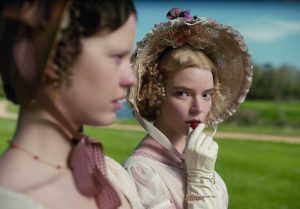 In this glittering satire of social class and the pain of growing up, Emma must adventure through misguided matches and romantic missteps to find the love that has been there all along.”

EMMA is out in US cinemas on 21 February 2020, and the UK on 14 February, and yes that’s Valentine’s Day! Perfect if you adore pretty muslin dresses but also like your love with an ascerbic streak.