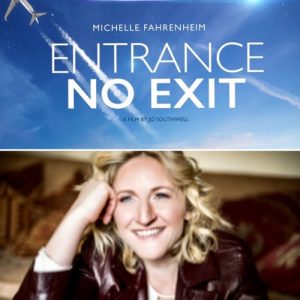 *** Check out my Entrance No Exit cast & crew interviews ***

It’s a mysterious, extraordinary entity, a technological marvel that somehow becomes a repository for our heaviest baggage.

Never was this shown so clearly than when I waited at the station with three actors to be collected by a runner and then taken to the set. A tiny Fiat 500 was circling, but we paid it no heed as, well, who expects to get four passengers and four bags of spare outfits In a Fiat 500?

My bag alone was technically bigger than the Fiat 500. 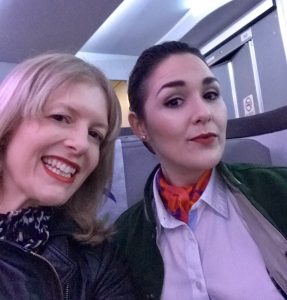 Reader, Charlie expected (interesting film stat: all three runners were called Charlie). And Charlie was right! If you believe, you can achieve, as the saying I just made up goes, and Charlie did indeed – very nonchalantly – get three of us in the back, one on the front seat and all our bags in the teeny tiny boot.

How Charlie’s ability to run a car that’s bigger on the inside than the outside didn’t get him the job as the 13th Doctor god only knows.
Back to top

Something else I learned is that a film set quickly develops its own rhythm, its own personality, and its own weather system. So frozen was I that I had to be stopped from breaking into Let It Go.

Day 1 was bone-chilling, but en route to the set I reassured myself I’d warm up once I was “inside”. But “inside” turned out to be a Berkshire aircraft hanger made of gaps, corrugated metal and gaps.

We were filming in an aeroplane interior – in a pleasing round of the movie game Six Degrees Of Kevin Bacon, the actor had filmed an EE commercial in the same one. (Kevin, it would’ve been nice if you’d left behind some leftover stardust to warm our bones. Next time I watch Tremors I’m afraid I’ll have to cheer for the giant worms.)
Back to top 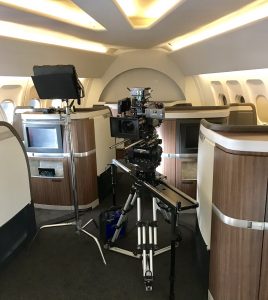 Setting up my selfie

Entrance No Exit is written by actress and writer Sophie Dix (among her many acting credits, she was Captain Sadie Williams in Soldier Soldier).

Their film follows glamorous A-list sports star Helen (movingly and wittily portrayed by future A lister Michelle Fahrenheim) travelling by plane, who finds a minor incident unravels the rituals she uses to hold her OCD worries at bay.

I haven’t read the whole script and not every scene was filmed in First Class, where I was Extra-ing. But as someone who used to suffer myself (which I write about in this review) I can understand Helen’s emotional response on the plane: feeling it’s only your rituals keeping the damn metal tube in the sky must be terrifying.
Back to top

Jo managed to secure funding for Entrance, No Exit through crowdfunding and sponsorship. She also managed to assemble a full crew. 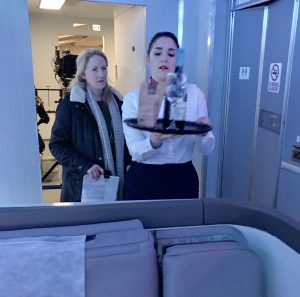 I’d read my Call Sheet (my first – it’s a printout that covers location, props, cast, crew, call times, transport, where the nearest hospital is, and most importantly lunch). The world of independent filmmaking is a tightknit one and a few names were already familiar to me.

Jo has always been driven, juggling more balls than the most popular 1950s debutante. On set she was focused and calm, and as final-final deadlines (rather than simply final deadlines) loomed, she and director of cinematography Dirk Nel steadily increased the speed.

Dirk has over 60 cinematography credits, including Innocent, a mini series out this year, movie Kids In Love starring Will Poulter, and several Maigret TV detective films.

I’ll admit I was completely in awe of him, but then my photography skills are limited to cropping more attractive people out of my selfies. On Entrance No Exit he was working closely with Ash Li, the talented assistant cinematographer, and a demon with a yellow tape measure.

Plus several extras, and actress Nadia Lamin who played our air stewardess while also doubling up as AD assistant. But most importantly, ME.
Back to top

In an effort to never stop learning on this shoot, I spent time between takes in my First Class seat reading Rupert Everett’s hilarious autobiography Red Carpets & Other Banana Skins on my Kindle.

And in one of those coincidences where after finding out about something it then pops up everywhere, I very much enjoyed reading about a sex scene he did with Sharon Stone which included an unexpected if sensible use of the yellow tape measure.

But back to the shoot: when Michelle walked past my seat I had to stand up, recognise the A-lister and give her “A Look”. 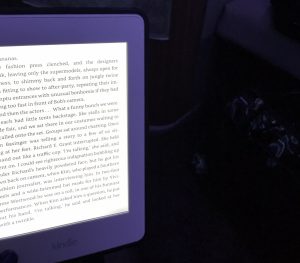 Keeping up with my film gossip, I mean research

Then I had to rummage convincingly in my handbag while she hovered worriedly nearby. (An easy task; I’m an expert rummager as my handbag is always full to the brim with make-up, purse, keys, toy cars and a million shattered dreams).

And I can tell you the exact moment I went from clueless extra to clueless extra who thinks she should get an Oscar: when Jo said after a rehearsal that she liked my interpretation of “A Look” and wanted me to repeat it exactly for the actual filming.

So I did, many times: as we did another take, or rehearsed to avoid actors and extras blocking each other, or went for a close up of faces and feet.

“A Look” from me soon encapsulated recognition, surprise, and jealousy; my handbag rummaging time overtaking even Rose pretending to look for her car keys in Get Out.

Next I had to stand on the opposite side of First Class, pretend-chatting to actor Philip Ridout (recently seen in thriller The 12 and folk horror Dogged) and fellow extra Christine. 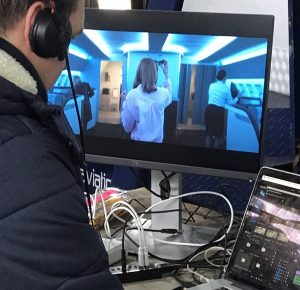 To paraphrase REM, that’s me in the left-hand corner

We noiselessly gossiped for the camera, while Philip silently told us a NSFW limerick he said was the funniest ever. As I can’t lipread we’ll have to take his word for it, though once more an existing talent – laughing at men’s jokes that I don’t understand – saw me through.

By now I was in full actress mode. I didn’t have my handbag with me, but I did have a noisy packet of chorizo crisps.

Actors: have you ever tried to silently suck a crisp on camera? WHERE IS MY OSCAR?

This time I had to turn round and look our now-upset A-lister up and down, and I knew exactly what I was aiming for: shock, horror, and the tiniest splash of mild concern as I’d decided my character was not a complete cow, just misunderstood.
Back to top

Back in Economy (what?) all was busy.

Keeping everyone in line was my new best friend, actor William E Lester, playing the part of the air steward to absolute perfection. 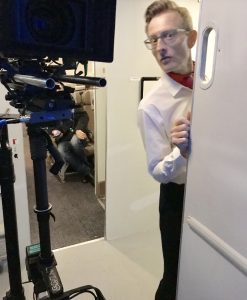 And with decades of acting experience behind him, it turned out he’d had no need of my suggestion that he get into character by walking up and down at the station as we awaited our lift to the set, saying “chicken or beef?” to bemused commuters.

I was finished by about 5.30pm, so one of the Charlies took me back to the station where I hopped (not literally – I’m not Method yet) on a train home.
Back to top

There wasn’t mean to be a Day 2 for me, but Jo and Dirk needed to re-shoot a scene, so I was sent off with reminders to come back in the morning looking exactly the same.

I’ve barely changed my hair and make up for 20 years, and with every new favourite outfit I wash-and-wear it daily for a week, so this wasn’t a problem. 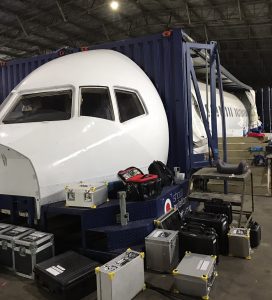 More cases than when I go away for, um, one night

I did have to wear different tights, as the ones I’d hurriedly put on for Day 1 wouldn’t stay up further than mid-thigh (I only mention that so you know even successful-film-stars-in-waiting like me suffer these little indignities).

There was a heads-down sense of urgency when we reconvened, a steady speed overlaid with intensity; starting with the new call sheet which stressed what had to be done, and how quickly.

I was only needed for a couple of hours, repeating yesterday’s scene when Philip told us his limerick but this time from many different angles (the scene not the limerick, which was still very NSFW).
Back to top

I’ve joked with directors of indie films about the focus on food but it’s true.

I once interviewed actress Zoe Cunningham and my question about the differences working on small or big budget productions happily evolved into descriptions of the catering on an indie film set and a big budget advert she did with Arnold Schwarzenegger.

Thank god for Haribo; sweets I only started appreciating after having children, and needed to fill 30 kids’ party bags for 70p each. It turns out they’re also a perfect non-messy, on-set energy boost. 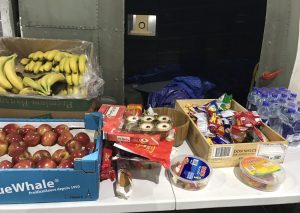 I now have even less idea how any actors stay slim

The rest of the food was on the other side of the hanger at the Craft Services tables. On Day 1 of Entrance No Exit they groaned under the weight of crates of sandwiches, Pombears, crisps, bags of nuts, caramel wafers, chocolate chip cookies, cherry bakewells, shortbread, apples, bananas and more Haribo.

And that was before the bacon rolls appeared mid-morning – newbies like me stopped politely after one, old film set hands (me by Day 2) went in for another.

By the end of the shoot almost everything had been eaten. Except the apples and bananas, forlornly losing their sheen like once-famous actors hanging around the red carpet when Hollywood has already moved on.
Back to top

There’s a lot of waiting around on a shoot, but the rhythm that quickly evolved on-set felt steady and productive rather than boring and arduous. 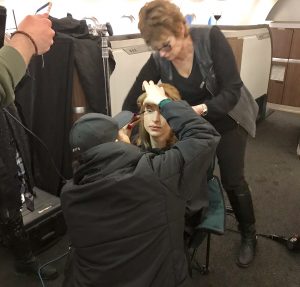 Michelle getting ready for her close-up, and whatever the opposite of a close-up is called

Time is well-used: every time a shot was being set up, I was at the food table snaffling the cherry bakewells, I mean make-up artist Gemma was touching up Michelle’s lipstick; or hairdresser Haley, with her comb and her brush and her hairspray, was fixing her red hair. (If I learnt one thing it’s that perfectly bouncy, shiny hair is the A-lister calling card.)

Despite only being an extra for a day and a half, I felt a sense of anticlimax where I got home (though to be fair it was the Easter holidays and I then had to look after my own children).
Back to top