You are here: Home / Trailers / The Glass trailer has arrived! Insert Shattering / Reflective / Window On The Soul Puns Here 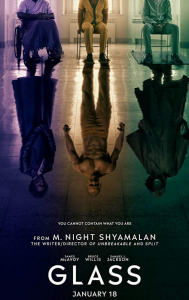 The latest film from M Night Shayamalan, it follows on from last year’s scary Split, and features Sarah Paulson as a psychiatrist specialising in treating people with delusions of grandeur – specifically those who believe themselves to be superheroes.

Cut to her in an echoey hall, facing three men (well 30 if you include all of Split villain Kevin Wendell Crumb’s personalities):

David Dunn (Bruce Willis), a security guard and the only survivor from the train crash in Unbreakable, and

Mr Glass (Samuel L Jackson), whose bones break so easily he’s had 94 fractures in his life already. He also has a superhuman IQ.

Lots of people are going to die, as the Beast, a hideous personality within Wendell Crumb which we saw near the end of Split and which may or may not be supernatural, is back.

Check out the trailer below. The film is released on 18 January 2019 in the UK and US.