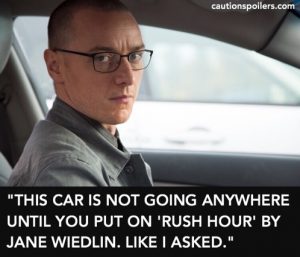 I’ve given Split four stars so this will be an appreciative review, though I’ve written 22 more, and maybe even another one that’s really nasty.

I’ll do my best not to give too much away but if you really don’t want to know anything about it beyond “man with many personalities who looks like a cross between Phil Collins and a teenage neo-nazi kidnaps three girls and keeps them in a basement while popping off to see his therapist” then you’re best off not looking at any reviews of it, aren’t you.

Claire (Haley Lu Richardson) is having a party for her birthday. She’s invited her whole class, which means including outsider Casey (Anya Taylor-Joy).

After the party, Casey – who regularly runs away and spends half her school day in detention – is offered a lift home by Claire’s dad, along with Claire and Claire’s friend Marcia (Jessica Sula), and it’s then that they are kidnapped by Kevin Wendell Crumb, and yes you need to remember that name.

The kidnap scene is chilling and things are only going to get worse as the girls find themselves in a small windowless room with a small bathroom off it.

The three girls are also split (see what I, sorry, see what M. Night Shyamalan, did there). They can’t work as a team, as they aren’t one. Casey was only invited to the party for some inclusivity virtue-signalling. Claire and Marcia are good friends but Claire is very much a fight-back girl, and sees the danger in behaving the way girls are taught to behave: being nice, even to one’s captor. Casey is much more measured and knows from experience to play the long game.

Poor Marcia is caught in the middle. She doesn’t have much agency and is pulled between Claire and Casey.

Kevin (James McAvoy) suffers from Dissociative Identity Disorder (DID), caused by an abusive childhood. Kevin has at least 23 personalities; Barry is, in theory, the dominant personality in charge, and manages who can be in “the light”, that is, at the forefront. Two personalities worked in tandem to kidnap the girls: Dennis and Miss Patricia.

Dennis and Patricia disdainfully refer to all the other personalities collectively as The Hoard. There is also another personality, the 24th, who could be real or could be mythical, or could simply be genuinely supernaturally evil.

It’s not easy to watch James McAvoy. He is not just creepy, but disruptively creepy. Let’s be honest, all women understand creepy (the constant small boundary-crossings, just enough to unnerve but not enough to make them explainable to anyone else; their overthinking of their interactions with you; the too-long-by-a-millisecond glances) but there is something about Kevin’s demeanour, to a greater or lesser extent with all his personalities, that genuinely makes one’s flesh crawl. And his many personalities just take up so much damn space.

The compassionate and sympathetic Dr Fletcher (Betty Buckley) works with Kevin and other people with DID, and also works tirelessly to get what she considers are the disorder’s true parameters properly recognised by her peers. She never seems to be uneasy in the presence of Kevin even when she’s not entirely sure which personality is dominant, or if one is pretending to be another.

Convinced that the personalities can actually effect physiological changes on the body, expressed in their different IQs, fitness abilities, and even cholesterol levels, Dr Fletcher thinks these severely damaged people may actually be our conduit to understanding the unknown.

They could even be the cause of what we think of as supernatural, such are their potential powers. But even if she’s right how much physical development can Kevin’s personalities control? And bearing in mind the enormity ( in both meanings) of the spoken-about 24th personality, how much damage can he do?

When women and girls are kidnapped in films it’s so easy to be exploitative. Split avoids that, and most of the personalities seem almost asexual, working together to capture and keep the girls for a higher purpose (though still clearly a very grisly one) rather than straightforward slasher film rape and murder.  (Naturally one of the girls does end up for half the film in her knickers. I suppose we can’t hope for cinematic feminist perfection instantly.)

McAvoy’s performance is jaw-dropping. It manages to be both mesmerising and scarily unwatchable at the same time, then by turns terrifying and sympathetic, playful and murderous.

Despite the different props Kevin plays with, McAvoy can convey a whole personality with a quick silly shrug or a high pitched giggle or even an incorrectly-made sandwich. He’s so good that if I met him in real life frankly I would run for the hills.

In fact so extraordinary is his character that it’s easy to forget this is, at its heart, a straightforward thriller.

Anya Taylor-Joy is excellent, conveying beyond-her-years watchful stillness so well (Izzie Coffey who plays 5 year old Casey in flashbacks also has that stillness). Claire and Marcia are fine – their roles don’t seem particularly deeply drawn, though they are slightly more than the traditional horror types.

Betty Buckley is terrific; while driven by sympathy for the emotional turmoil her patients are going through, her Dr Fletcher is so sure of her own conclusions and her ability to predict Kevin’s behaviour that her self-confidence is almost constantly tipping into hubris.

The very last section drags, and there are only so many injury-related hopping races along dark, dripping pipe-filled tunnels I can bear; though the mini-surprises keep on coming.

And you’re never entirely sure what is supernatural, psychological or physiologically “real”.

Watch the Split trailer, and scroll down if you want to know about the credits scene.

The last scene has David Dunn, played by Bruce Willis, in a diner, commenting on a TV report about Kevin. David Dunn is the survivor of the train crash in Unbreakable; so Split takes place in the same universe as that film.