You are here: Home / Trailers / Freaks teaser trailer is all the questions 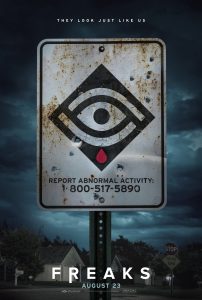 “Any freaks who are running loose are illegal.”

The unsettling aspect of this teaser trailer for Freaks is that it’s not initially clear who the title is referring too.

At first it looks as if crazy dad Emile Hirsch is the unhinged one, keeping his daughter Lexy Kolker from escaping their prison-like home into the real world with tales of what will happen to them if she ventures outside, or even opens the front door.

But then Bruce Dern’s freaky ice cream van man – called Mr Snowcone – appears and suddenly all bets are off in the weirdness stakes.

Freaks is billed as a sci fi so there’s clearly a lot more going on, some of which is hinted at in the teaser – then there’s that poster, with the eye on the sign. (Should I call that phone number? Will it cost me £100 a minute from the UK? Is it a recorded message trying to find out if I was miss-sold PPI?)

“In this science fiction thriller, a disturbed father (Emile Hirsch) locks his bold 7 year old daughter (Lexy Kolker) in a house, warning her of grave dangers outside. But the mysterious Mr. Snowcone (Bruce Dern) convinces the girl to escape and join him on a quest for family, freedom, and revenge.”

The film is directed by Zach Lipovsky and Adam B Stein. It’s released in the US on 23 August, though there’s no word of a UK please as yet.