You are here: Home / Trailers / Chills and thrills in the official Freaks trailer 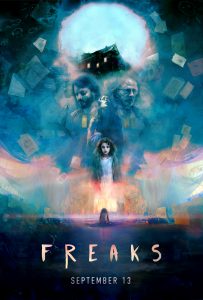 This feels very much like an allegory for America in its current state, which is horrifying but at least makes a change from Brexit movie metaphors.

Freaks, the sci fi thriller out in August, now has an official trailer to go with the teaser we got back in May.

The teaser was a (deliberate) head-scratcher; who are the freaks? Though this time we see more of of dad and daughter Chloe, and her mum, who it turns out is not dead – though her reality seems rather… bendy. Plus Mr Snowcone the scary ice cream man (Bruce Dern) puts in an appearance.

Check out the new poster from Chris Shy of Studio Ronin too. 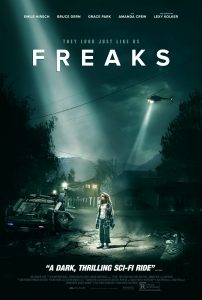 “In this science fiction thriller, a disturbed father (Emile Hirsch) locks his bold 7 year old daughter (Lexy Kolker) in a house, warning her of grave dangers outside. But the mysterious Mr. Snowcone (Bruce Dern) convinces the girl to escape and join him on a quest for family, freedom, and revenge.”

The film is directed by Zach Lipovsky and Adam B Stein. It’s been on the festival circuit for a while, with a US theatrical release on 23 August, as well as a screening at London’s FrightFest the same day.

Watch the new trailer below, and check out the teaser from May: