You are here: Home / Trailers / Tiptoeing through the trees, a teeny tiny teaser trailer for A Quiet Place: Part II 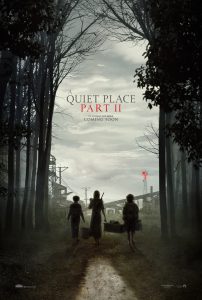 After yesterday’s first-look image, today we get an announcement piece about A Quiet Place: Part II and a teaser poster.

There’s also a proper trailer coming on New Year’s Day, which is the perfect launch date.

With half the world waking up with headaches and hangovers, plenty of us will identify with monsters that destroy anything that makes a noise.

In case you aren’t sure what an announcement piece is (neither was I!) it’s a baby teaser:

“Following the deadly events at home, the Abbott family (Emily Blunt, Millicent Simmonds, Noah Jupe) must now face the terrors of the outside world as they continue their fight survival in silence. Forced to venture into the unknown, they quickly realize that the creatures that hunt by sound are not the only threats that lurk beyond the sand path.”

Like the first film, this is written and directed by John Krasinski (though he won’t be appearing as his character died in the first film). The movie stars Emily Blunt, Cillian Murphy, Millicent Simmonds, Noah Jupe and Djimon Hounsou (though at time of writing, there are no character names for Murphy and Hounsou on IMDB).