You are here: Home / Trailers / Second Captain Marvel Trailer Is Here And It’s Kree-mendous (sorry but it was that or another MARVELous pun) 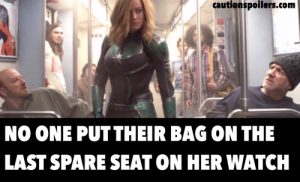 Seriously, if you’re that fit at 80 you have no need of public transport priority seating. Give it up for exhausted middle-aged women like me.

Building on the first trailer released in September, we see an injured Carol found with no memory by the Kree, “a race of noble warrior heroes”, who imbue her with extraordinary superpowers so she can live “longer, stronger – superior”.

She knows she’s got a past though, as she keeps getting flashes of memories of her old life. “Would you like to know what you really are?” asks Talos, a Skrull, tantalisingly (Ben Mendelsohn, surely officially the Hardest Working Actor on this or any other planet right now).

The outfits are fabulous, and Carol’s green blood matches them, something we should all aim for. 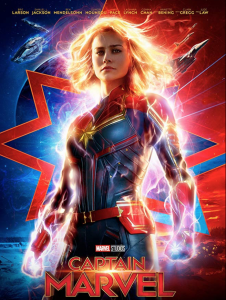 We also got a terrific new poster the other day – where Captain Marvel looks like I imagine I do when I too am being heroic, eg tackling queue jumpers and rescuing cats from playhouse roofs.