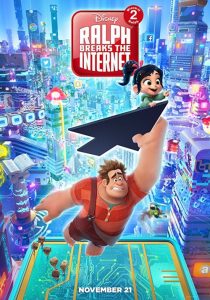 *** My Ralph Breaks The Internet review is now live ***

With a title that could only have been signed off after Twitter extended its character count to 280, this sequel revisits Ralph a few years down the line.

But this time he and Vanellope are hitting the world wide web, via a wifi router in the arcade. “This is the most beautiful miracle I’ve ever seen” she opines, much like me when I discovered Instagram filters.

After last year’s Emoji Movie, with app ads scattered among the bright colours, I was worried when this trailer started this would be more of the same, but actually I really liked it.

First the two head to a Search Bar to find where to go, though the autofill is, as he explains himself, a little aggressive, as Ralph’s indecision brings forth a torrent of words starting with “um”.

Then it’s off to a website that’s “super intense and really nuts” –  and yes it’s Disney. But that means marching Star Wars Stormtroopers, and then it turns out the Disney Princesses have certainly got the measure of their own movies:

“Do people assume all your problems got solved because a big, strong man showed up?” they ask Vanellope, testing her to see if she really is a princess.

Ralph Breaks The Internet: Wreck It Ralph 2 (yes I copied and pasted that from my title) is out in the US on 21 November and the UK on 30 November 2018. It’s directed by  Phil Johnston and Rich Moore, and stars John C Reilly and Sarah Silverman. Check out there trailer below.