You are here: Home / Film Reviews / Ralph Breaks The Internet 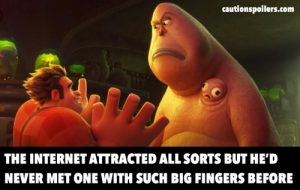 It’s the city that never sleeps. An always-on, flashing lights-filled, metropolis with a dark underbelly.

No not Swindon. This is the Internet, and whereas many of us find it intermittently breaks us, here it’s Ralph himself doing some serious damage – first when his videos go viral, and then when he lets loose a destructive virus.

Both his Internet breakages are friendship-related, as he initially tries to help Vanellope keep her home and then finds her big dreams a threat to their relationship.

For children, this is a lesson about how destructive we can be when we let our own neediness and anxieties stop the people we love following their dreams, as it just pushes them further away.

The manifestations of all things online are cleverly done: the virus looks like a black centipede, as it scuttles around, looking for – literally – insecurities, which of course it finds in Ralph. KnowMore, this Internet’s version of Google, with a librarian in a book-lined booth, is a delight.

At times this feels like a hand-holding walk-through for ancient parent novices (like me?) and small children, several years ago; its high street highlighted, with curated trips to its seedier underbelly. Ralph’s viral videos tap into that love of nostalgia that the Internet feeds on so well; and the nods to the Dark Web, mean online comments and rapidly spreading viruses should give us pause for thought simply be being concrete entities.

Six years after the first film, Ralph (John C Reilly) is happy in the Litwak arcade, working in his game all day then spending time with his friends in different video games during the night. The only thing that could make him happier is if he didn’t have the work bit.

Vanellope (Sarah Silverman) craves more excitement; her game, Sugar Rush, is getting boring, and there are no new levels to open up.

Be careful what you wish for though; Ralph adds a new track to Sugar Rush, which is so exciting it results in the player’s steering wheel breaking off. It quickly looks as if Vanellope won’t have a game or a home any longer, as Sugar Rush is so old that the only wheel available is on eBay – and Mr Litwak considers it too expensive to be worth buying.

So Ralph and Vanellope decide to track it down themselves. Heading down a tunnel marked “wifi”, they soon find themselves propelled through the wires into the sparkly, happy Internet.

I always imagine the internet happening somewhere above my head, apart from the Dark Web which is lurking somewhere below my feet, so I felt quite at home once they arrived.

It’s beautifully cheery, brightly-coloured and the sun never sets. Huge tower blocks house well-known brands: Amazon, eBay, Wikipedia, McAfee, and, er, BuzzzTube. (Also getting a mention is a ballet supplies shop called Desmond’s Tutu which may or may not be real but I hope it is.)

Twitter is there too, though unlike the real thing it doesn’t have thousands of people complaining that they either like or don’t like the same movie and hence feel incredibly excluded.

Spammers approach with placards and shout in people’s faces about child stars who ended up in jail (“Number six will amaze you!”); so green are the two friends that they take Mr Spamley, one of the placard holders, at face value.

Still, overall for Vanellope the internet opens up her world and widens her perspective; for Ralph it’s initially fun but then increasingly a threat to his comfort zone.

Their first stop is eBay, where they accidentally pay thousands for the last remaining Sugar Rush steering wheel; a need to earn the money to pay for it leads them first to Slaughter Race, where Vanellope meets talented street racer Shanks (Gal Gadot), and then on to BuzzzTube. Thinking Ralph can make the fortune they need with viral videos, Shanks sends them to her friend Yesss (Taraji P Henson), BuzzzTube’s head algorithm.

BuzzzTube has different videos playing in its vast hall, as the hearts people throw at them are literally vacuumed up.

The Internet is a frenetic place as searchers are whizzed around to their destination in tiny cars and pop-ups pop up everywhere. A particularly enjoyable oasis of calm is Vanellope’s meeting with the Disney Princesses, where they regale her with their frustrations and she introduces them to comfy loungewear – it’s hard enough being a working princess without having to do it backwards, and in heels.

In return, they help her find her song (every princess needs a song). In fact this is a movie crammed with strong women characters: the princesses, racer and friendship expert Shanks, and Yesss, who pops up at just the right moments to help Vanellope and Ralph with their task.

But it’s not all fun and games online, as we all know. At one point Ralph accidentally wanders into the Comments section; later, venturing into the Dark Web leaves him entangled with a virus that’s far more destructive than he ever intended. And, well, those goat videos he makes.

The virus finds poor Ralph to be 100% insecure, and replicates him everywhere. Soon millions of needy, insecure cloned Ralphs are bonded together to form one vast needy, insecure Ralph, but with the potential to destroy the Internet. Giant Ralph roams the tower blocks like King Kong, Vanellope in the palm of his hand.

It does go on a bit, moving from one mostly self-contained incident to another. And my 9 year old felt the film was “too long for a children’s film” at 1 hour 52 minutes. It reminded me in parts of The Emoji Movie with the constant references to online brands, though here they won’t tend to be ones that awaken kids’ pester power (no child has ever demanded I donate to Wikipedia or buy McAfee security software, and besides I always find made up names like BuzzzTube far more jarring).

I thought a lot of the film would have gone over my 6 year old’s head (literally in a way), though he told me today that he loved the Giant Ralph monster and the car races.

There’s a slight judderiness to the movie, and it doesn’t stray far from the Internet’s mainstream offerings. Still, its cheeriness, inventive crossovers and clever illustrations of online creations drive it forward and hide any cracks (insecurities?) of its own. And its message about how friendships change doesn’t flinch.

Watch the trailer for Ralph Breaks The Internet: