First of all, WHY ISN’T THIS FILM CALLED CHASING MAVERICK.

And breathe. Okay, Maverick is back at the academy, training pilots – and it’s as much a surprise to him as to them.

“His exploits are legendary” they are told, though they still get a shock when it’s time for dogfight practice and he whips their asses.

There’s a lot in this trailer to take you back to ’80s Top Gun – Maverick riding a big motorcycle with no helmet, the wind in his hair and a hot lady on the back. Gorgeous young people playing sports on the beach as the sun goes down. Immaculate white Navy uniforms. Conflict. And noise! Lots of noise. In fact it’s all a lot more referential of the original than I was expecting.

I really like it, and it’ll be interesting to see if the final film is as drenched in nostalgia or if it’s just the scenes and imagery they’ve selected for the trailer. 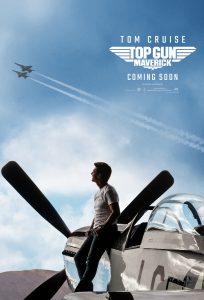 “After more than thirty years of service as one of the Navy’s top aviators, Pete “Maverick” Mitchell (Tom Cruise) is where he belongs, pushing the envelope as a courageous test pilot and dodging the advancement in rank that would ground him.

When he finds himself training a detachment of Top Gun graduates for a specialized mission the likes of which no living pilot has ever seen, Maverick encounters Lt. Bradley Bradshaw (Miles Teller), call sign: “Rooster,” the son of Maverick’s late friend and Radar Intercept Officer Lt. Nick Bradshaw, aka “Goose”.

Facing an uncertain future and confronting the ghosts of his past, Maverick is drawn into a confrontation with his own deepest fears, culminating in a mission that demands the ultimate sacrifice from those who will be chosen to fly it.” 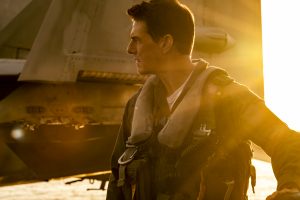 Tom Cruise is 57 now, and I like to think that he, Keanu and Halle Berry ass-kicking their way round Hollywood, flying the flag for middle-aged action heroes, mean the rest of us who remember watching the original Top Gun in the cinema in 1986 can sit back and relax in their reflected glories (and our slippers).

Watch the Top Gun: Maverick trailer below (and the first trailer here):